New In Town: Afterglow Art’s The History of Burlesque 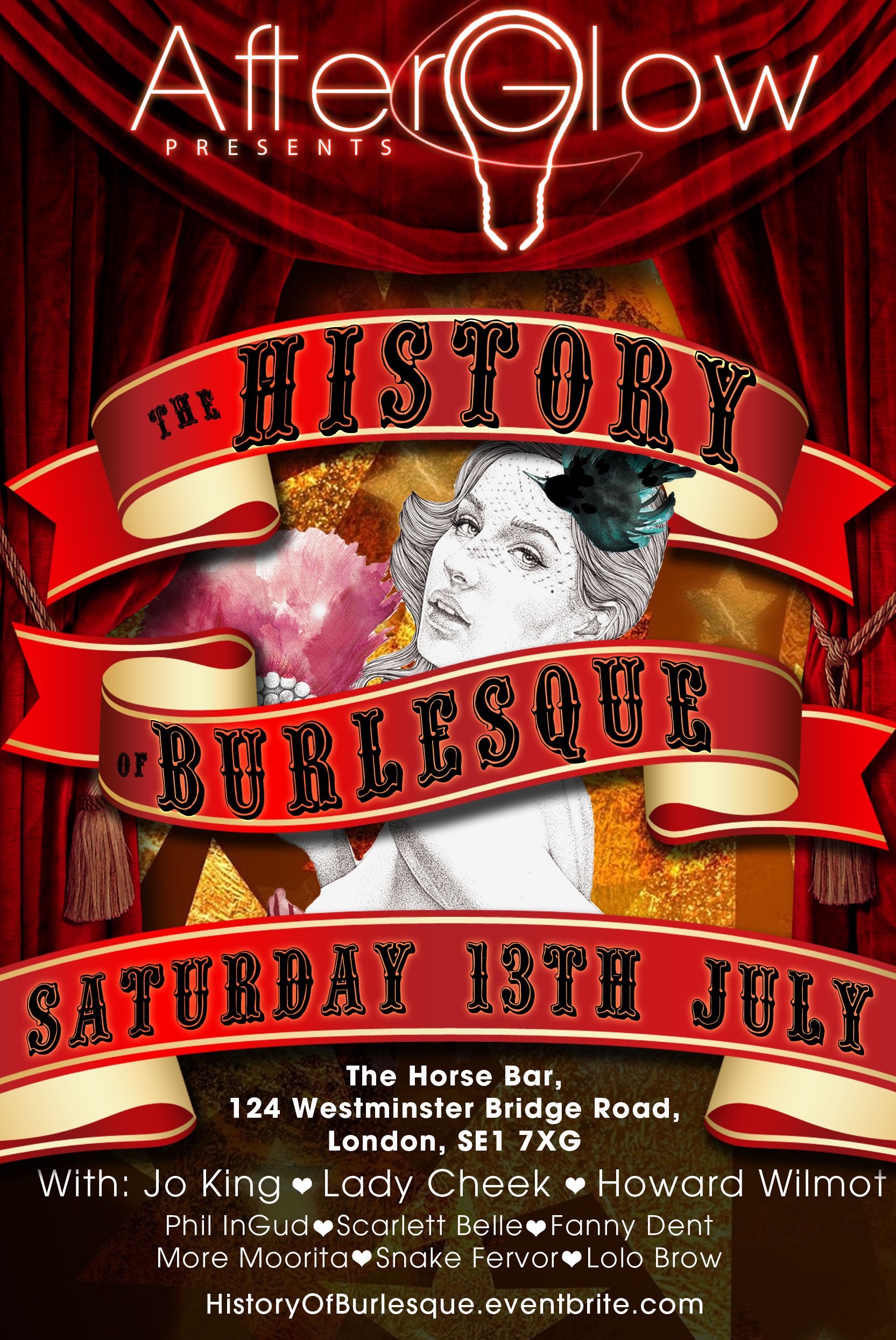 Not a historical reference in sight at A History of Burlesque. 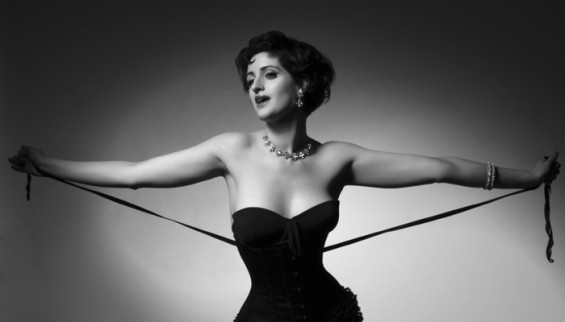 Impresario and performer Lady Cheek was one of the History of Burlesque’s speakers.

The Horse is a newly re-thought drinking establishment on the Westminster Bridge Road, and Afterglow Art are a new production company taking up residence in the upstairs quarters. Their A History of Burlesque, is very much a New Thing here.

At 7pm, the stated starting time, there’s little going on except a salsa class warm-up downstairs (and very good one too, although the bartenders worry the noise will creep up and upset the performers upstairs) and two heavily made-up women smoking outside.

At 7.45pm, on ascending to the theatre, there’s a step-ladder onstage and somebody spraying the red velour curtains with a bottle of liquid. When our compère finally emerges from the audience and walks to the stage — the curtains apparently for effect only — at around 8.10pm, she has a plaster hanging from her heel and her microphone isn’t working. This welcome is more spit ‘n’ sawdust, less polished pearl.

About 25 loyal audience members, however, seem adamant that the show will commence and things are off to a good start when Lolo Brow treats us to her Shuffle act. With an iPod set to shuffle mode the audience are encouraged to shout “change!” whenever they want to see her dance to a different tune. She is accomplished and dynamic, inhabiting the rhythmic nuances in her diverse musical collection facially as well as bodily: no mean feat when the theme to Countdown is cued up straight after JAY Z.

Unfortunately, the event’s pace halts abruptly at this point. The rest of the first half consists of three speakers, only one of whom is particularly engaging and inspirational. Lady Cheek, founder of The Cheek Of It! burlesque academy, is first up. She announces “Oh, I am literally going to tell you my life story!” before reading notes from her phone, albeit in a charming, affable, I’m-sure-she’d-be-lovely-to-work-with kind of way.

Following her is a short talk by Howard Wilmot, founder of Burlexe and Boylexe, who is better rehearsed, but whilst it is commendable that both Wilmot and Lady Cheek have achieved notable commercial success in their fields, any personal insight they may afford us feels secondary to the desire to plug their school or production. Salsa music does indeed drift up, and one has an inkling that perhaps this evening could be better spent dancing downstairs rather than up here, trying to make sense of it all.

Jo King saves the day somewhat. A natural speaker with some highly amusing stories, she tackles the stigma attached to the word “striptease” versus the acceptability of teaching a burlesque class and above all tells us that “it’s an art form if you do it right.” Quite, Jo, and perhaps that’s it: burlesque is a visual art. Talking about burlesque brings to mind a famous quote of hotly-disputed origin that has been variously attributed over the years to Laurie Anderson, Steve Martin, Frank Zappa and Elvis Costello and, although they were contesting the validity of writing about music at the time, the point rings true: burlesque is “like dancing about architecture”.

The second half begins at 9.45pm and thankfully we’ve been promised some performance. Boylesquer Phil InGud, who regularly performs at Miss Polly Rae’s Between The Sheets  and appeared at last Friday’s Boylexe, proves to be one of the best bookings of the evening. His gyrating Skype-chat routine is a cheeky and satirical epitome of the modern burlesque scene.

A good cross-section of burlesque performance in its various guises is represented here. Fanny Dent, the wild card, struggled with her song’s key but stripped up an over-laundered-and-greying-undies-style storm, removing at least 10 pairs of full-coverage knickers with a great feel for comedic timing.

Both ladies had to deal with sound blips from a kilted man on the soundboard who should have been quicker on the uptake, with Morita even having to start her performance again, but they coped well.

Scarlett Belle’s classical, cheeky, ship-in-full-sail striptease was a treat. To be so beautifully made-up, so stunningly sensual when removing a feather boa and then to let go and shake it with wild abandon is the contrast that defines many a great burlesque performance. Snake Fervor rounds up this far better second half with her fire-swallowing act, adventurous for such a small venue and she definitely has our attention with an incredibly engaging face.

It’s evident what they’re trying to do here. It’s a New Thing, and whilst the title A History of Burlesque is misleading, there being no chronological references whatsoever, it’s a positive event. There is potential here. The intimacy of the venue is definitely not one of its shortcomings. It’s more the looseness of the programme and lack of pace as a whole show that holds it back. With some tweaking, one really hopes things here can improve, because Afterglow Art’s heart is very much in the right place.