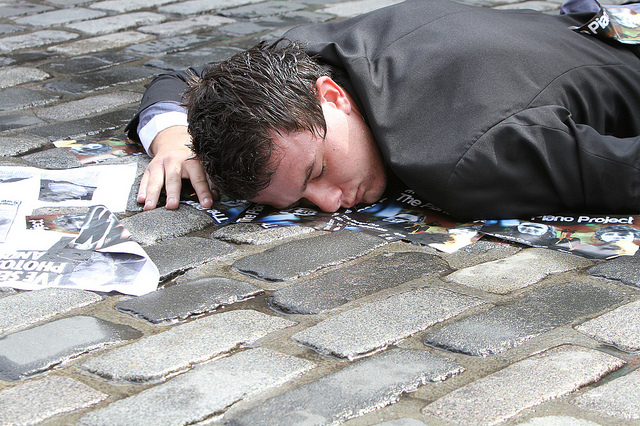 Another Edinburgh Fringe has passed. As Kath M Mainland CBE, Chief Executive of the Edinburgh Festival Fringe Society said, “I’ve no doubt every single person who watched a Fringe show, or experienced this wonderful festival city, will take away unforgettable memories.” For better and worse, she’s not wrong.

While it was once again the place to be to see the best talent from around the UK and beyond, the Fringe wasn’t without it’s downsides. Here is what we’ll remember long after that last pizza crunch supper has been digested.

1. It was once again an utterly humongous affair.
According to the official statistics, there were 50,459 performances of 3,314 shows in 313 venues across all genres.

By any benchmark, that’s an amazing number. In comparison, Brighton Fringe – the largest Fringe Festival in England – mustered “only” 650 events at nearly 200 venues over a comparable length of time.

Thought for the day: will there be a time when the Fringe gets too big? Is it a bubble waiting to burst?

2. When it comes to organisation, it wasn’t just the free festivals that failed miserably.

While the #Cowgateheadgate debacle was no doubt the headline disaster of the Fringe, Udderbelly’s much-heralded Circus Hub was not too far behind. As our Circus Editor Katharine Kavanagh said in her exclusive report:

“If only the same attention that went into the Hub’s publicity and image had been put into the production and logistical management! The first week of Edinburgh Fringe has been a persistent series of cancellations and postponements from the Circus Hub programmes, at no fault of the artists or companies involved and, no doubt, to their frustration and cost as much as to ours as keen audience members…

Even when they started up, getting into the shows wasn’t always simple.

@thisiscabaret one of the FOH just checked my tkt & got me to stand in line, till the preshow announcement told me it was the wrong venue 🙁

3. Cabaret has its own category at the Edinburgh Fringe but where were the awards?

After lumbering around in the wilderness for years, cabaret and variety shows were finally allocated their own category a few years ago. This was a welcome recognition that, while some of what are now listed in that category could sidle into the comedy, music or theatre sections, they were never a comfortable fit under the old structure. Moreover, they were seen as the weird kids at the party that no-one wanted to talk to. And by no-one, that generally meant reviewers and those that handed out awards.

With the arrival of its own category came kudos of a kind for cabaret. Acts were more likely to flock to its banner and wave it with vigour and pride. More reviewers gamely trotted into shows knowing that this was not theatre, not comedy, not music but something entirely…other.

In 2012, Soho Theatre teamed up with Time Out to present the TO&ST award, the only prize specifically aimed at cabaret shows. The first recipient was the New York songbird Lady Rizo and the second was octagenarian comedienne Lynn Ruth Miller. There never was a third: Time Out pulled out of cabaret coverage and production in 2013 and Soho Theatre dropped the ball at last year’s Edinburgh Fringe, killing any momentum the TO&ST award had.

Once again, the only cabaret and variety performers walking out of Auld Reekie with trophies in their luggage are dependent on the good graces of the comedy and theatre industries. Hearty congratulations are in order to the likes of Laurence Owen (winner of the “Act Most likely to make a million quid” Malcolm Hardee award), Penny Arcade (winner of an award from both Herald Angel and The Scotsman) and B-Orders and Smoke and Mirrors for their Total Theatre/Jacksons Lane Award for Circus.

The profile of cabaret has never been higher in the UK and abroad with new variety festivals popping up in Birmingham, Milan, Wales and Leeds. Now that it has its own category at the Fringe, the scene deserves to be recognised on its own terms, especially with the news that the London Cabaret Awards have no plans to return.

4. The reviewers were, in general, terrible.

At least pretend to look surprised. True, the Fringe has never had the greatest reputation for reviewing excellence. Given the sheer quantity of shows, it is understandable that the likes of Broadway Baby, Three Weeks, Arts Award Voice et al lean heavily on students and others with little experience of what they are about to critique. This often leads to those reviewers being amazed, befuddled or entertainingly appalled by everything they see in the first week, handing out four or five stars with alacrity before settling into more shoulder-shrugging evaluations.

Ben Walters and Claire Smith held up their end well at The Scotsman but others couldn’t have missed the point of some shows more if they blindfolded themselves and picked random adjectives out of thin air. As ever, those writers faced with circus shows like Le Haggis outdid themselves in their bid to write with great expression and passion about a subject they mostly knew very little about. They would do well to heed our circus editor’s “bingo card” guide to avoiding clichés when reviewing big top shows. 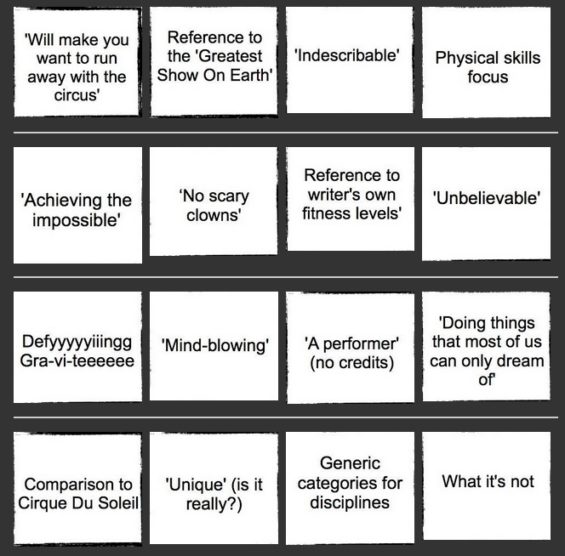 The standard for what passes as Fringe journalism sinks a little further each year but it was not just the student bloggers that failed in their duties. Surprisingly, the Guardian’s much-respected Lyn Gardner was one such culprit. She wrote about her experiences of audience interaction at the Fringe, evenly evaluating several instances of how acts had dealt with the punters before finishing with a rather overly harsh interpretation of an incident at one outing of the Puddles Pity Party. Puddles may be a giant but he’s no bully.

5. When it comes to humour, the joke is on comedy.

When Darren Walsh was recognised by the Dave channel as the man behind the “funniest joke” at the 2015 Fringe, he may wish they had chosen someone else or another one of his lines.

When his winning gag was revealed (“I just deleted all the German names off my phone. It’s Hans free.”), it wasn’t long before it was pointed out that Frank Sanazi had been using that line for years.

The TV channel refused to admit fault saying, “The jokes for Dave’s Joke of the Fringe are submitted by 10 extremely experienced comedy critics from shows performed at the Edinburgh Fringe. Each submission is checked and cross-referenced for originality before being put to a public vote.”

Whether any of those “extremely experienced comedy critics” have been to a Frank Sanazi show in the last seven years is unknown. Here’s a reference from April 2015 for the Dave checkers and researchers to ponder:

A more serious point, though, remains. If, as Frank says, the Fringe’s “funniest” joke is eclipsed by far more humorous material in his own set, what does this say about the witty folk working outside stand-up comedy? How many musical comedians were considered by Dave’s army of experienced critics? How many drag queens, sideshow artistes, compères, burlesquers and clowns? Comedy is subjective but there’s no doubt that many artists in the “cabaret and variety” category are at least as funny as the average stand-up comedians. Dear Dave: please cast the net wider next year.