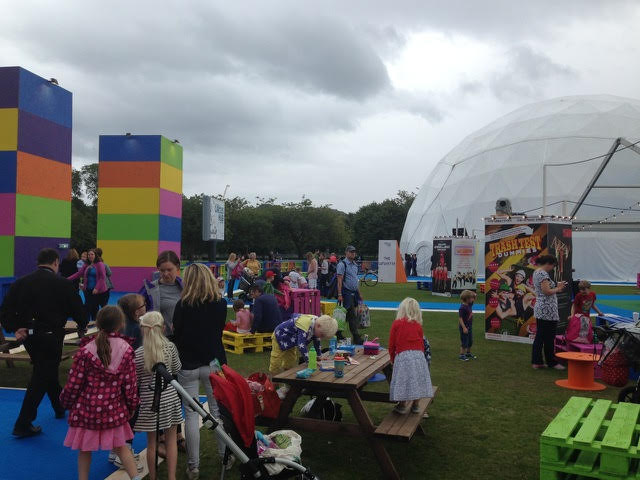 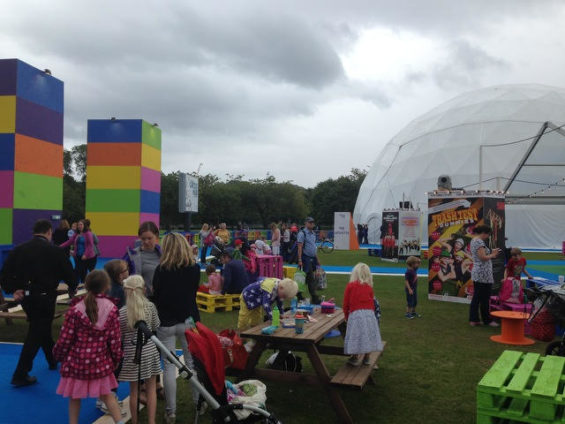 Better known for their upside-down purple cow, Udderbelly’s brand new Circus Hub is described as “the first ever major venue dedicated to circus at the Edinburgh Fringe”. An ambitious programme will see a round dozen shows including two European premieres, four UK premieres, five Fringe premieres amongst its bill. Located on the Meadows just south of the University of Edinburgh, the site has a 1000-seat capacity split between two big tops.

Our Circus Editor Katharine Kavanagh tried checking out the Hub and she is less than happy.

I think the look they’re going for here is “fresh and funky”, based on the bright geometric chunks of colour that create the strangely ball-pit like environment of bar and two performance venues. Interestingly, the design of their printed material appears to evoke the National Circus website and branding, which I suspect is no coincidence.

If only the same attention that went into the Hub’s publicity and image had been put into the production and logistical management. The first week of Edinburgh Fringe has been a persistent series of cancellations and postponements from the Circus Hub programmes, at no fault of the artists or companies involved and, no doubt, to their frustration and cost as much as to ours as keen audience members. The comedians affected by the #Cowgateheadgate debacle are not the only ones to suffer at the hands of their trusted venue overlords this season.

Needless to say, my carefully planned schedule has gone out of the window, and many of the shows I travelled here specially to see will now have to be missed. A shame for me, and a shame for anyone – artists, industry or fans – who likes to read informed circus reviews.Interesting to note that Big Sexy Circus City, produced by Steve Kennedy and also housing two canvas performance venues (built by the Pirates of the Carabina crew), has had no such setbacks. Although they had their own teething troubles when their launch night proved more popular than anticipated and – hint hint – they could do with a few more traders to really boost the festival atmosphere.

There are things Underbelly does really well. This new venture has so far not been one of them. Luckily, the reputation of the shows they’ve programmed will go some way to redeeming them. But next year, be wary of booking any of their shows in week 1. And, with all their giant promotional machine, don’t forget that there is also excellent circus activity to seek out in other smaller venues across the city…