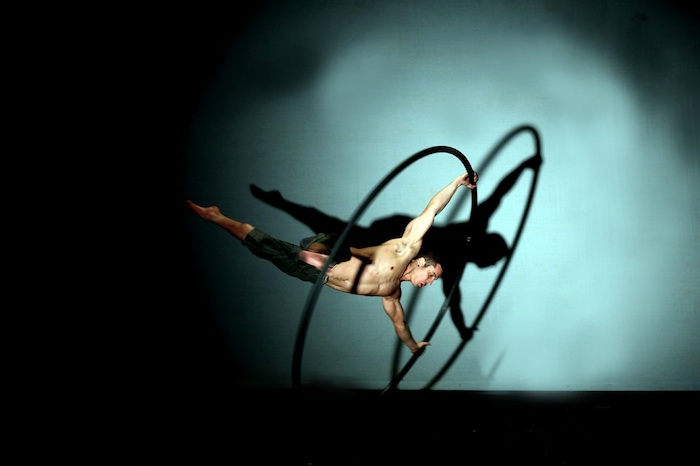 All aboard! Pirates Of The Carabina present Flown, a unique aerial and comical show at the Udderbelly on London’s Southbank. 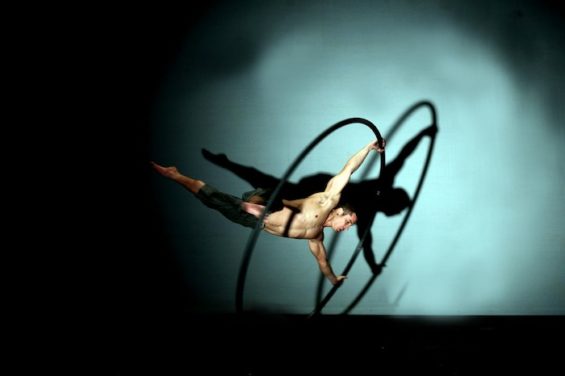 Chaos and comedy all up in the air: Flown will be at the Udderbelly until 22 June.

With a vast mix of circus disciplines, mixed with live music and comedy, the show has something for everyone. Fans of the traditional circus arts enjoy a range of standard aerial and floor acts, including aerial hoop, a hilarious silks act and cyr wheel, performed on both the usual apparatus and, impressively, a reinforced hula hoop. Hand balancing and tight rope also briefly feature in the show, along with a host of other apparatus and rigging.

The tension is controlled brilliantly, with segments of absolute chaos contrasting with short snippets of monologues from each performer. With each cast member taking on a particular character, it allows for some great stage chemistry, often causing eruptions of laughter as the company diva goes on yet another tantrum. There is plenty happening at once and, with only brief moments of pause, the show gives off a buzzing energy.

However, the constant movement behind the central performer, coupled with the unrelenting stream of equipment moving and rig climbing sometimes makes it hard to focus attention on the acts themselves. Then again, occasionally catching a glimpse of a cast member scaling the huge rig, precariously balancing on the equipment to get into position for the next act, can feel like a secret moment caught only by yourself.

The company pushes the boundaries of the individual circus disciplines to create a unique collection of acts. What seems to be a common-or-garden chinese pole setup suddenly becomes an aerial treat as the pole springs into the air. The rigging and counterweight support are used to full effect here, leaning the pole and spinning the performer around the space and over the heads of the audience. Getting so close to the seating agrees with the spectators with many a gasp heard at this point. The warning at the start of the show, to stay seated throughout, is definitely a sensible one.

The finale brings all of the messy and erratic elements together. Performers swing in harnesses and an aerial swinging drum kit comes in to end the show with a bang. Some of the musical transitions are a little tatty but the live music element, almost entirely performed by the circus artists themselves, lends to a unique and engaging sound. The musicians are wonderfully integrated on the stage, with instruments and performance areas dotted throughout the space. They support the acrobats with relevant and unique music that blends and supports the action effectively.

With a mostly electronic soundtrack, coupled with live vocals, saxophone and a variety of other instruments, the music complements the physical movement and enhances the awkward and individual feel of the show. It is a bizarre and unique show that, despite being a little rough around the edges, allows the audience to delve into an unmasked view of circus.