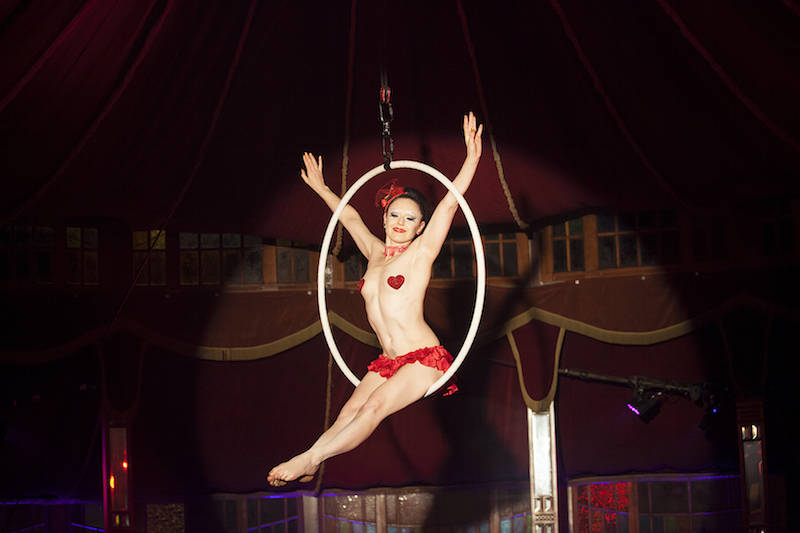 So where would one start, reviewing cabaret, in Edinburgh…? A show that celebrates the best of traditional and modern Scottish culture in the beautiful Assembly Gardens’ Spiegeltent sounds like a no brainer. And what a treat Le Haggis turns out to be!

The kilted fella who takes my ticket asks if I’m game for a wee dance when I head in and, sure enough, there’s country dancing and mixing and mingling going on with the performers, dressed in tartans, leathers and blue faceprint as we make our way gradually towards our seats. I get out my camera to try and catch a few snaps before the inevitable ‘phones off’ announcement, and manage to catch a pose from lead singer Grant Dinwoodie, who would have blown me away this evening with his rockstar performance even if he hadn’t handed me the rose from between his teeth. The charmer.

The live band has fiddle and concertina alongside the electric guitars and drum kit, and play a dynamic range of Scottish classics from both the folk repertoire and the modern pop canon, with a nod to Rabbie Burns in some of the lyrics. Marianne Fraser breathes into the notes of the folk melodies she sings, and impresses with the range of dynamics she can employ.  For emotion, energy and passion, however Dinwoodie is supreme, with a naughty twinkle in his eye and a playful spirit he brings the crowd to life whenever he appears. And, with each appearance, he seems to have fewer clothes. Which is nice. 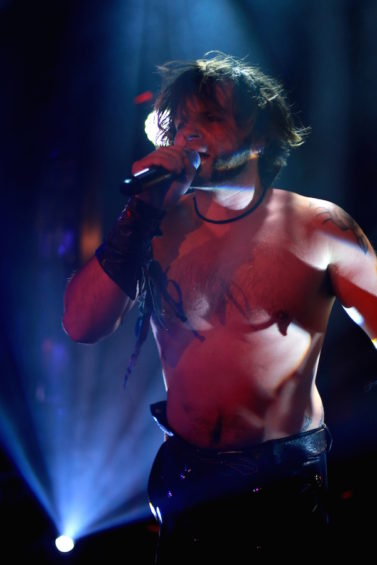 There are also a few tantalising views for those who prefer the ladies, as Justine Squire performs on the aerial silks while the band sing of waterfalls, developing from pretty poses in a white lacy nightgown and knickers into some interesting holds and crowd pleasing tumbling wraps. It’s hard to know whether Empress Stah intends to reveal as much as she does tonight with an interestingly torn costume but, either way, her serene expression as she performs on the aerial hoop underlines her professionalism.

Ed Muir presents his Diet Coke break Chinese pole act, which is just as steamy as when I saw it in Circus Of Men, and this is the only act that has no apparent connection with Scottish culture – unless director Graham Main considers being a builder to be particularly Scottish?

A highlight for me was the unusual and delicate concertina solo from Mohsen Amini, which builds until we’re all clapping along. The hand-to-hand acrobatics from Jamie Swan and Beata Surmiak are also at a very high level, with nice storytelling and creative choreography too.

The energy grows as the night goes on, and there are big stirring numbers that even a sassanach like myself can sing and stamp along to. It’s a personal frustration that it no longer seems ‘cool’ to announce acts and credit performers any more, so I have to track them down myself afterwards, but otherwise there is no way I could fault this show. A real cabaret of musical and physical skills, presented with verve, humour, elegance and rock and roll.