Why Ana Morphic Is The Future Of Burlesque 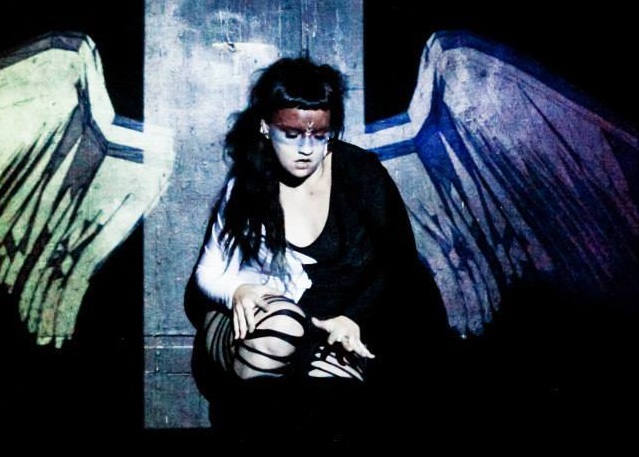 While the global burlesque press is fixated on the American scene, the future of the art form is right here in the UK.

Did you know that the London burlesque scene is one of the most creative in the world? The biggest annual international burlesque bunfest of them all is happening in Las Vegas this weekend and, for the last two years, the award for the contestant deemed “most innovative” has gone to a London-based dancer (the reverse-stripping Laurie Hagen and then the fire-breathing Aurora Galore).

It should come as no surprise, then, that the capital is not short on performers pushing the artistic boundaries of burlesque. One such is Ana Morphic, a dancer who combines striptease with interactive video to create a jaw-droppingly captivating experience. Relatively unknown in the London scene, her most popular outings are at Barelesque, a charity event she co-founded. Held at South London’s RVT, the night has become renowned for its kink-positive approach to fundraising and has added thousands of pounds to the coffers of the Albert Kennedy Trust.

If burlesque is to survive and grow as an art form, it needs to adapt to the 21st century and and adopt new techniques and new technologies. Despite having little in the way of budget and no outside help, Ana Morphic does both to brilliant effect and could well be the herald of a new age of burlesque. Watch her in action at Barelesque 8 and scroll down to see more of her work.

How did you get into burlesque in the first place?

Tallulah Van Leer, Honey Schnapps and myself decided to start a show four years ago called Barelesque. We just jumped straight in at the deep end, roped friends of friends in, and suddenly I was onstage at the RVT tearing my corset off to The Prodigy for charity. Getting naked onstage provided an incredible feeling of self confidence that lasted for months afterwards – and I have never looked back.

How did you come up with your particular style of performance?

After doing a few acts which were comical and nude, I realized I had complete creative control over what I did on stage. It was our show and, therefore, our rules. I have been making videos since I was 10, and so it felt like a natural step to start adding video elements into my acts. Music videos have always a hobby – sometimes paid, sometimes not. I have always loved making them for others, and sometimes making them for myself. So one day I just said to The Minxes, “Do we have a Projector at the RVT…?”

What is the process behind the creation of each video?

My earliest music videos usually involved me prancing around in my living room/bedroom filming myself lipsyncing to music and trying out trendy new effects in editing. This process always starts with a song. Typically one I have been listening to over and over, which then manifests itself into visuals while I’m out and about. I will open up my iPhone and start making director’s notes for certain lyrics. My imagination is pretty vivid, and everything is seen in my mind’s eye as video. Then there is generally lots of animating, filming, dancing and practicing in my living room/bedroom until the piece is finished.

This year’s Swedish entry at Eurovision also used video projection. What did you think of it?

I thought it was interesting that at his winning moment, he said ‘the people who helped make this performance possible couldn’t be here tonight.’ I took that to mean the audio visual technicians, the animators, the rehearsal team couldn’t be there. That was a big shame. I think they deserved way more credit for what they had achieved. Personally, I think a lot of special effects animators and editors get sidelined by directors in film. The same goes for performances like this only being credited to the vocalist. Because I make all of my own visuals and also perform to them, this irked me slightly. I think that he won partly because of the animated backdrop to be honest. It was simple, there was little interaction, but it worked well for Eurovision.

How many video-based routines have you created now?
I have created four in total, and am about to start work on my fifth. The first one was a drug-themed performance to seven remixes of Underworld’s Born Slippy with lots of 90s VHS footage of festivals and clubscenes for me to go nuts in. Since then I have been a Wolf in Little Red Riding hood, tormented by her scent, and in my “Beautiful Nightmare” performance I interact with creepy visuals and pulling/pushing shapes all around me. My last one was to Marry The Night where I danced with cloned versions of myself. My god, that one was hard.

Have you ever gotten partway into a routine and ditched it for whatever reason?

Normally this happens right at the start. If I am torn between a few ideas, then I ask my fellow Minxes for advice. This used to be based on how well the concept fit the shows theme, but has now evolved into “how long will this take for Ana to finish?” The last project became a monster, and took over 2.5 months to complete. It sucked out all of my free time, and I was quite the stress bunny during its production.

Give how long you have been making these videos, are the becoming easier to make?

Funnily enough, they are taking longer! I keep pushing myself and trying to hit new creative levels. This can be detrimental to my free time as sometimes my ideas are too ambitious. I have had to scale down a project midway recently because hand animating all the elements was far too time consuming. They are also becoming harder as I try out new things. I never make life easy for myself. I want to make myself proud onstage, and if I can do that and reach new heights in video it feels incredible and is totally worth it. No matter how long it takes, video onstage is now my comfort blanket.

Which visual artists and burlesque artistes inspire you?

I am constantly stunned by the talents (and waistline) of the amazing Lolo Brow. Since the first time I saw her perform a few years ago as Nigella at the RVT, I knew she’d take over London. She moves with precision and poise, and gives the funniest face. I have had the privilege of filming some of her stage acts, and have been to her Cabaret Derangium which I highly recommend.

Her Familyyy Fierce are also just incredible, all of them pushing the boundaries of burlesque/drag, and making the world a queerer place. In terms of projection work, I was also taken aback by what I saw at Hyper Japan two years ago by the jaw-dropping Siro-A. They move in time with objects with a technique called projection mapping: if they move a box, the projected image moves with the box. The choreography and matching up to the projected visuals is astounding. They do it with precision and humour, and balance the two perfectly.

When can we next see you perform?

I have a few private gigs coming up this month, such as in friends houses and members only clubs. But the next big one will be Barelesque 9 – Bad to the Boner on November 18th. I’m super excited for my new act, as it involves Lady Gaga and Beauty and the Beast. Kisses you beautiful creatures!

For more information on Ana Morphic and to see more of her videos, visit www.missmorphic.co.uk.