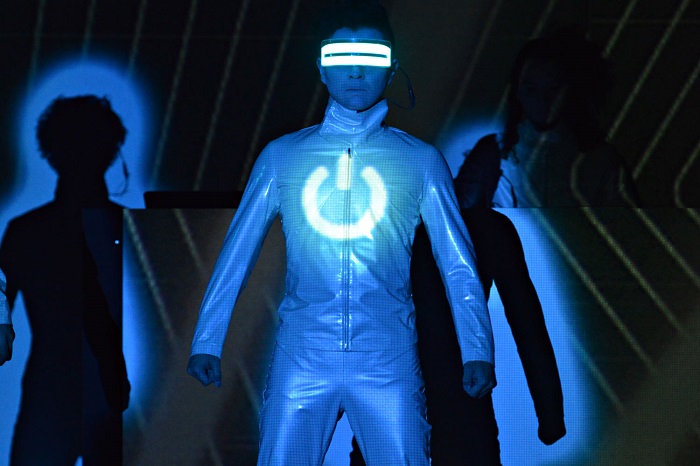 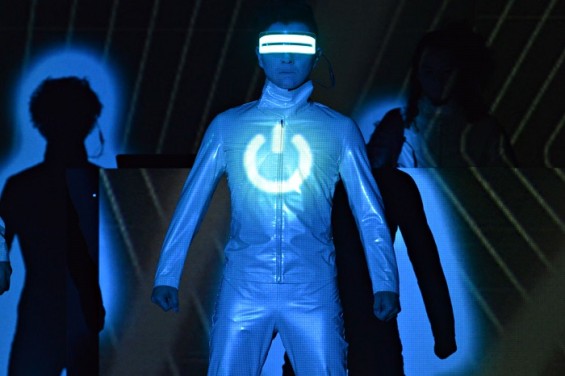 Call it Japan’s answer to the Blue Man Group if you want. Put a label on it if you must, but it isn’t really like anything you’ve seen before. Siro-A has returned to the Leicester Square Theatre with its fusion of truly spectacular visual effects, mime and a kicking electro soundtrack. Sure, there are elements of technical wizardry like those that have been glimped on Youtube, but what this six-man collective do best is constantly twist these expectations to something new and daring, while appearing to have a lot of fun whilst they’re at it.

The performances are split into short visual “sketches” with one or more white-suited, white-faced members of the team featuring in each one. The quartet of onstage performers – made up of Fumiya, Toshiya Arai, Keiji Miya and Yohei – move about in front of several screens as they manipulate all manner of projected visual effects.

Nearly all of the vignettes live up to Siro-A’s mad creative genius – from a film section where words fly around the screen to hilarious effect as they are transformed into the object spelled by the mimes to a spooky haunted castle sequence complete with huge giant chasing feet. A videogame section complete with a fully moving Mario, brought to life only by screens and lights, is excellently executed. Throughout the show incredibly precise choreography and timing is key, and the four performers generally pull this off impressively, with any mistakes made being so tiny as only to deserve a mention to illustrate how very efficient and rehearsed the rest of the performances are.

Whilst the four mimes meld into one kinetic clockwork body in front of us, DJ Kentarrow Homma and the show’s video artist, Daichi Norikane are constantly mixing the show’s visual and audio style in the background. Whilst Kentarrow Homma’s pumping electro is gorgeously and unashamedly relentless, it does make the intimate setting of the Leicester Square Theatre feel like an odd choice. At times slumping on seats in the small, dark room it felt as if we were all sitting down to this thick-beated technofest because we’d had one ‘shroom too many at the house party, not because we were here to see a show.

So could the team cope with a bigger venue, like the many that The Blue Man Group now play to? On the evidence of this, it’s quite possible. Siro-A definitely has the scope to take this act to the next level with some interactive use of the audience throughout indicating that they’re already thinking of ways to keep this feeling fresh.

It’s a short show coming in at just over an hour, but feels braver for only giving us the best of what they have, rather than lengthening the experience for the sake of it. The name Siro-A in Japanese can be literally translated as “impossible to define”, so it’s time to forget those blue baldies and their strange musical instruments, and go get yourself a ticket for one of the strangest 60 minutes in town.