Don’t Mess With The Merkin 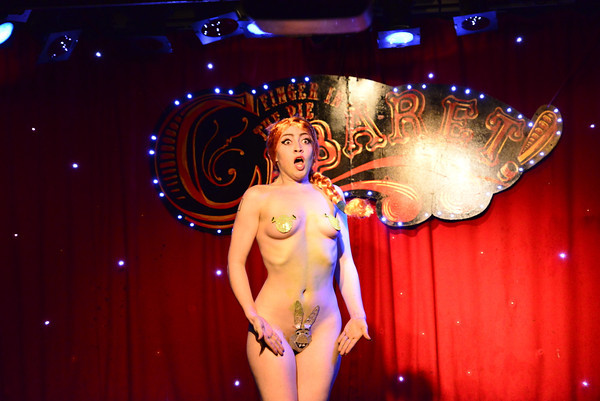 Knock, knock. Who’s there? Another comedian ripping into burlesque for cheap laughs. After Alexander Armstrong did it last year, Tom Taylor wrote in an unflattering manner about an unnamed boylesquer last month. Last week, though, another comic took it a step further by not only ridiculing a much-loved act and performer but also questioning burlesque’s feminist credentials. Ouch.

We asked award-winning burlesque performer and producer Lolo Brow for her thoughts. Here is what she said.

Every burlesquer worth their salt has been asked and has answered the usual questions: “why do you do it?”, “what’s the difference between burlesque and stripping?” and that classic “how can you be a feminist?”

Whenever these posers have reared their ugly heads in my presence, I can feel all my lips tighten with rage. I have a series of prepared responses to deal with these situations tactfully, however I have become bored with “politely” justifying to someone what I choose to do of my own free will. I would much rather glue them to a chair and force-feed them glitter.

This tantrum comes to you courtesy of a video hilariously named “Feminist Burlesque”. Long story short, a female comedian called Nadia Kamil refers to an iconic burlesque routine performed by Honey Wilde then unintelligently slates it by describing how it made her feel “icky” and “uncomfortable”.

Here’s the video if you haven’t seen it.

At this point, alarm bells were already ringing – not only was Honey Wilde’s routine designed exactly for that purpose but this supposedly intelligent feminist was embarrassing herself by missing the point completely.  I found myself screaming at my computer screen, warning her not to go any further. Alas, she didn’t hear me as she then felt it necessary to stumble into her own version of a burlesque routine. Cue some toe-curling cringing as she clumsily took off her clothes to reveal more clothes and a series of well-worn feminist statements like “equal pay” and “pubes are normal”. I found this latter statement particularly ironic as this comedian had earlier emphasized in a disgusted manner the use of Honey Wilde’s “hairy union jack merkin” only thrusting herself further into a hole of un-researched splendor.

Of course, I agree with all the statements she was conveying. However, despite her efforts to parody and satirise burlesque, frankly its been done before and far better, not least by Honey Wilde herself. Feminist burlesquers have used their artform the way it should be used; as a tool to build intrigue, narrative and to liberate. I can understand that, to the mainstream eye, burlesque may bring fears of the dreaded “Male Gaze” but usually only by the (perhaps literally) short-sighted people who focus on the stripping and not the brains behind it.

I was personally offended by Kamil’s phrase “feminism is the new sexy, consensual sexy.” It felt like a indirect implication that burlesque was somehow non-consensual. This is another stereotype that has loitered around burlesque for far too long. It suggests that, if a woman chooses to take their clothes off on stage, there must be something wrong with them. In effect, rather than supporting a woman’s rights to choose what they want to do, Kamil has further oppressed them. Some feminist she’s turned out to be. Repeat after me, Nadia:

“Feminism is the advocacy of women’s rights on the ground of the equality of the sexes.”

As individual performers or as an industry, we shouldn’t have to justify what we do of our own free will to anyone, especially not to a fellow feminist. As fabulous feminists ourselves, we know and revel in the knowledge that we have the right to do what makes us happy whether it is wanting to be a housewife, a businesswoman, a burlesquer or even (heaven forbid) a comedian.

So yes! I would like to toss my unwashed merkin in the face of this comedian, I shouldn’t have to remind people over and over that feminism and burlesque are not mutually exclusive. Oh my! It would be too satisfying to silence the next person who asks with my stiletto but I fear that prison is no feminist paradise.

The next time someone asks me how I can strip on stage and still be a feminist, my response will be polite and to the point: “How can you call yourself a feminist if you ask such a question?”

Lolo Brow’s Cabaret Derangium returns on 27 March to the Marylebone Gardens. Event and ticket information can be found here.