Is The Royal Vauxhall Tavern About To Become A Wine Bar? 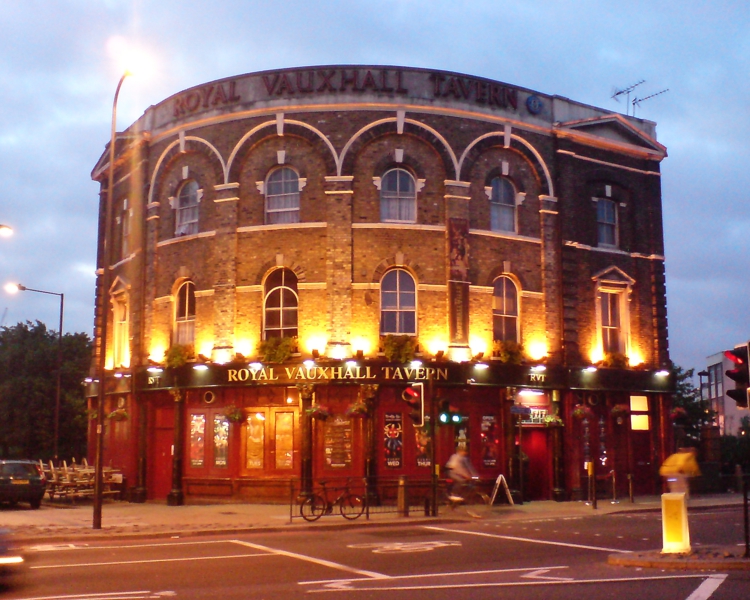 South London cabaret institution the Royal Vauxhall Tavern has been sold. There has been uncertainty for some time but the current joint owner James Lindsay has provided some details of its future direction in a lengthy statement published yesterday. In it, he discloses that the RVT’s first floor will be converted into a wine and champagne bar. The fate of the ground floor and its cabaret events is not specified.

The famed venue is South London’s oldest surviving gay pub. It was built in 1863 and has seen many stars of the drag scene on its stage, not least Lily Savage who played there up to four times a week for eight years. The audience wasn’t short of famous faces either – Freddy Mercury, Kenny Everett and Princess Diana disguised as a man all made an appearance. And was there a politician or two?

This is not the first time turmoil has hit the Tavern. In the Nineties, Lambeth council entered into a three year agreement with a developer and announced plans to build a shopping centre on the site. Protesters marched to Lambeth Council and the development was subsequently dropped. A decade later, Lindsay and business partner Paul Oxley bought the pub, installed a new light and sound system and opened it up for seven nights a week.

The last half-decade has seen a fillip in the venue’s fortunes. In 2012, it won the Best Venue prize in the London Cabaret Awards while flagship show Duckie has been winning over fans near and far. David Hoyle regularly holds residencies there, Scottee’s Hamburger Queen was a roaring success over its three-year run and the annual Hot August Fringe has seen the pub play host to a wide range of comedy, musical and drag talent.

Lindsay has been invited on board the new setup to operate a new company called Vauxhall Tavern London Ltd, a savvy move by his partners if the plan is to retain as much of the current clientele as possible. Citing “substantial losses in recent years”, he points out that there were two offers on the table. One would have led to “immediate development”, an option Lindsay turned down in favour of the current arrangement.

The work by the new owners will be extensive: “the RVT will undergo a full refurbishment both internal and external, which will see the first floor being opened as a wine and champagne bar with a new toilet provision at first floor level”. What exactly this will mean in terms of the live shows is left unspecified in Lindsay’s statement. Optimists can look for support from Lindsay’s belief that his partners “respect the history and culture of RVT”.

Alternatively, pessimists may point to the regrettable fate of Bistrotheque. When the owners demolished the restaurant’s cabaret room, described by Time Out as “the cradle of east London’s alt-drag revolution”, they promised that experimental variety shows like Lisa Lee‘s UnderConstruction would return: “We care passionately about things like UnderConstruction, which is absolutely brilliant. That’s the sort of thing we want to do more of – getting a really good local audience, making connections between performers, helping people come through.” Sadly, it was not to be and Bistrotheque no longer holds live events.

Below is James Lindsay’s full statement.

As current joint owner of Royal Vauxhall Tavern, I am happy to respond and clarify the situation. RVT has been sold and I have been retained by the new owners to operate a new company trading as Vauxhall Tavern London Ltd.

This has been necessary in order to allow RVT to continue.

It has not been possible to respond before this time as Paul and I had various legal procedures to complete, including an obligation to notify our staff first.

This is the second time I have now personally stepped in to secure the future of RVT. Paul and I came together to save RVT from closure 9 years ago because of the passion we both shared about RVT.

We totally recognise, and I am extremely touched by, the way people regard and talk about the many friendships that have been built between people who have so loyally supported the business, which is a very touching and unique experience. Sadly, RVT has made substantial losses in recent years, which has been the driving force in the sale being necessary.

There were two very strong offers made to us. One would have seen RVT closed for immediate development. I forcibly resisted that offer, instead working with the new owners, who I believe understand, respect the history and culture of RVT. Now the challenge is to turn this business around with their support.

RVT will undergo a full refurbishment both internal and external, which will see the first floor being opened as a wine and champagne bar with a new toilet provision at first floor level. I hope that all of us who care about the future of the RVT will support this.

I am happy to meet people face to face, it is not my intention to conduct my business interest or management of RVT on social media network sites and I ask people to respect this.

As always it’s good to talk to you either on the dance floor or away from it.

Let’s continue together to make RVT a success.