Lisa Lee: Shooting From The Lip 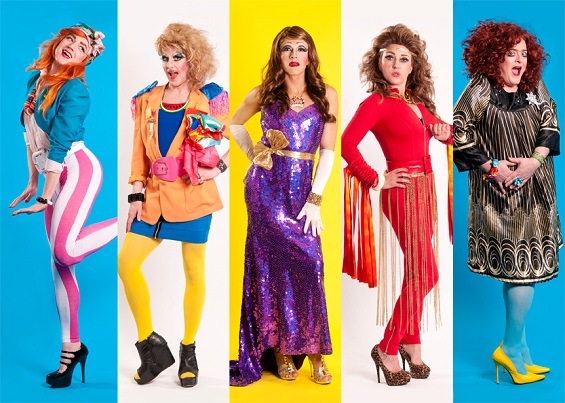 Lisa Lee (second from right) with her fellow LipSinkers.

It’s been a busy 12 months for Lisa Lee, member of the no-singing, all-dancing LipSinkers and producer of acclaimed showcase UnderConstruction. After many years performing at East London’s Bistrotheque, she saw its cabaret area closed as part of its refurbishment. Although the owners promised that the space would re-open in “early May”, the focus would be more on art galleries, fashion shows and film events.

Despite the loss of what she called the “tranny tent”, Lee has found plenty to do. She was on the panel of the inaugural London Cabaret Awards, her Rude Grrl production company curated the Apple Cart Festival’s cabaret tent and the LipSinkers have gigged all over London and beyond.

This year will hardly be less hectic. As well as bagging a new monthly residency at the Royal Vauxhall Tavern, Lee will be curating a new series of UnderConstruction shows with the first in a fortnight. A perfect time then to have a word in her shell-like, perhaps. We hate to interrupt busy people but it just had to be done.

Congratulations on your monthly RVT residency. The venue holds a special place in the heart of cabaret fans. Why do you think that is?

The RVT is absolutely deserving of that special place. It’s a great venue which nurtures artists, provides for an audience and the community at large and has long stood the test of time. We couldn’t be happier with our residency

Which five words would best describe your 2012?

Despite announcements to the contrary when it closed down the cabaret area, it doesn’t look like The Bistrotheque will be offering cabaret at all in the future. Has that come as a shock?

It will never be the space it was, but we knew it was coming and we don’t shock easy. A short film was made called Vinegar to Jam which documented the last days of Bistrotheque’s cabaret room. It is pretty touching because, as the film shows, the venue was a seminal space and we all spent a lot time of time there, seven years apparently.

It’s not the end of cabaret at Bistrotheque, though. The ground floor is now occupied by the new Private Dining Room. We perform some shows in there last December and we have a few more gigs booked in for this year. Jonny Woo gave a performative lecture when it opened last year and they have been producing a choir out of there since October.

Apart from Bistrotheque and the RVT, the LipSinkers played in all kinds of environments last year from intimate popups to outdoor festivals and big tops. Is there a kind of performance spaces that best suits the LipSinkers?

Each space bring is its own challenges and as such makes each performance unique. Natural light is our enemy, so we try to avoid amphitheatres! We had the best time at Wilton’s Music Hall last summer, a tiered stage which is steeped in history. We played there as guests of Duckie and the audience loved us.

What’s the news on UnderConstruction?

UnderConstruction is coming to the RVT on Thursday 21st February. More than twelve artists will be presenting short new work including Tricity Vogue, Marcus Reeves, Nando Messias and our own Rhyannon Styles and Blanche DuBois, as well as some emerging artists new to the platform. It’s great that it’s back. It’s time.

Well done on being nominated for the London Cabaret Awards. Awards and talent shows are a divisive topic in cabaret. What’s your take on them?

Thanks! We’re delighted to be be shortlisted. It’s the first time we’ve been nominated. If we’d been picked last year it might have looked a bit dodge because I was on the judging panel! Divisive? Maybe – ask us next week.