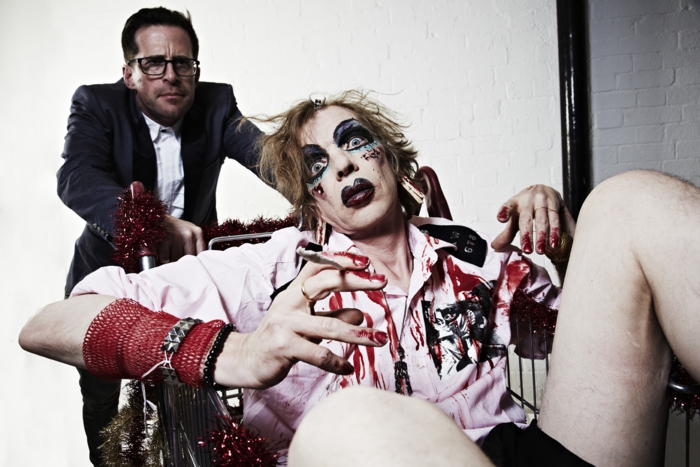 Abandon all decorum, ye who enter here. Franco Milazzo talks to the two arch-polemists before their new show of merry melodies and hellish havoc.

This December, cabaret’s philosopher-king David Hoyle and writer-composer Richard Thomas will drag patrons towards the light with the debut of cabaret show Merrie Hell. Be ready for more than infernal imagery when in the nether realms of the two rabble-rousers: Hoyle is known for spewing controversy onstage like a savvy Frankie Boyle in a miniskirt, while Thomas gave the Daily Mail conniptions with Jerry Springer: The Opera. 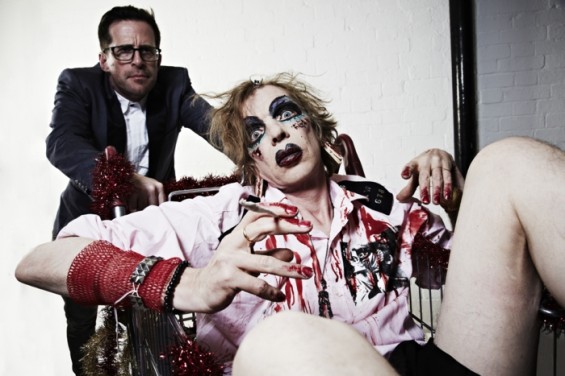 Who came up with the title?

Richard: My friend Alethea Wiles came up with it.
David: But I chose the olde worlde spelling.

Are there any new songs you are particularly looking forward to singing?

David: All of them are brand new. I’m genuinely looking forward to every one of them. This whole process and this show finally makes sense of twenty-five years in the business, but I wouldn’t have been ready for it at any point in my career prior to this. I am so grateful it’s happening now. It feels like salvation for my soul. You can’t say more than that.

Richard: They are all original songs that we wrote together. We wrote about 20 songs and settled on 12.

Richard’s previous shows have been in bigger spaces than Soho Theatre Downstairs. Has the venue affected your vision for the production in any way?

Richard: Obviously, I couldn’t draw on the forces of a 60-piece orchestra, or a chorus of a hundred. But David is such a performative force of nature that he more than makes up for it.

Is there an overarching narrative thread to Merrie Hell, as in  your previous projects?

Richard: David Hoyle: the musical. He is the narrative.

Given Richard’s background, people may be expecting this show to be more musical theatre than cabaret. How would you define the show for them?

Richard: This will be the most original cabaret you have ever seen.

What’s the plan for Merrie Hell after its run at the Soho Theatre?

David: A tour of teacher-training colleges.
Richard: Sell it to the Germans.

Do you believe in Heaven and Hell? If you did end up in some kind of afterlife, which deceased musicians would make up your ideal band?

David: Yes. But they’re both on Earth. The band would have Judy Garland, Bette Davis, Marlene Dietrich, Lena Zavarone and John Lennon on vocals with Cyd Charisse dancing.

The two hellraisers set the Soho Theatre on fire down below from November 29th to January 5th. See sohotheatre.co.uk for details and tickets.