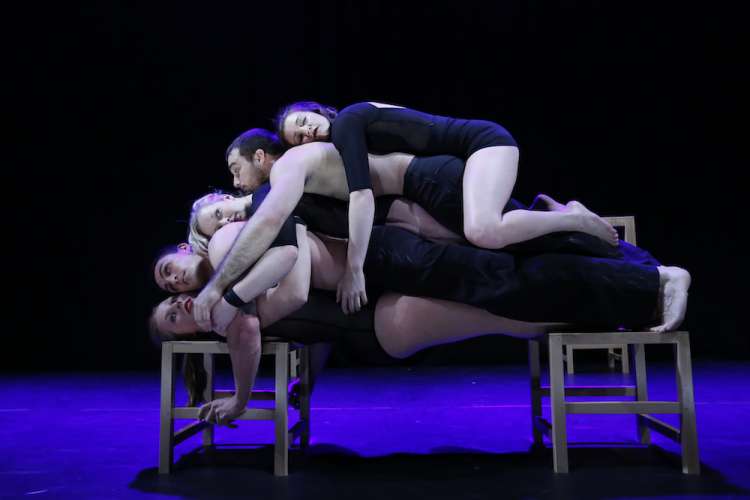 No man is an island said John Donne, and who are Circa to disagree? Their latest show takes the concept of teamwork to stunning heights.

This year, the Udderbelly’s tentpole production (pun intended) is the London debut of Circa’s Closer. The troupe has outgrown its Australian roots and are now a global company: over 30 countries have seen them break the rules of contemporary circus through theatricality, symbolism and other forms of highbrow hijinks. While their Lewis Carroll-inflected Beyond at the London Wonderground in 2013 was utterly wonderful, their recent works have been less well received; their 2015 Edinburgh Fringe show Close-Up posted middling reviews while January’s The Return at the Barbican was met by a mixture of shrugs and ecstatic reviews.

Into this fray comes Closer, a show which has developed from Close-Up but goes in a perpendicular and far more interesting direction. The latter’s huge TV screens and verbal introductions attempted to decrease the emotional distance between artist and audience but now the show is all about the proximity between performers. There are still elements of audience interaction – the karaoke singalong is a fun, if unusual, touch – but the focus for many of the routines is firmly on the acrobats themselves.

And that’s definitely a good thing. Between them, the quintet made up of Jarred Dewey, Lisa Goldsworthy, Lauren Herley, Daniel O’Brien and Kimberley O’Brien demonstrate no small amount of individual skill but work wonders in combination. Goldsworthy acts as the base for many of the routines – and is arguably the fulcrum of  the show itself, taking centre stage a number of times often balancing her colleagues on her head, shoulders or chest. A kink-lite twist to a circus standard blends shibari with showmanship: Herley is tied to a chair with a thick rope by her comrades before she escapes and ascends upwards with delightfully dramatic choreography. An exhilarating acrobalance section shows duos and trios working together to create funky new spins on the standard moves.

Musically, Closer is a fascinating ride. As with all mute performance arts like circus, a considered soundscape can add flavour, context and depth to what is happening on stage. In this case, there’s no live band as seen elsewhere but, instead, an inventive playlist which crosses genres like a blind jaywalker. There’s upbeat 90s indie care of the aforementioned singalong to Verve’s Unfinished Symphony and Oasis’ Champagne Supernova as well as slower numbers like the languid noodlings of Shostakovich’s Jazz Suite, the midnight fairground sounds of Nouvelle Vague’s The Killing Moon and the mogadon melodies of Velvet Underground’s Pale Blue Eyes.

The two major routines that have been carried over from Close-Up – a suspenseful chair-tower routine and a highly kinetic hula hooping number – are crowd-pleasing affairs but thematically add the square root of zilch to Closer. Both showed the troupe performing spatially distinct from each other which runs counter to the show’s concept of physical closeness. No-one begrudges a little extra sugar but coating a Victoria sponge in chocolate is something else.

Circa have succeeded here with an exciting show which is packed wall-to-wall with creativity and class. Moreover, it adroitly walks the tightrope between theatrics and acrobatics. There’s a message but there’s also magic. The more mainstream moments are, on the whole, amiable adjuncts rather than sore thumbs. In the same way that John Donne’s poetry inspired the ultimate account of comradeship, Closer is an inspiration to the spirit of teamwork and its beautiful bounty.

Closer continues at the Udderbelly until 12 June. Tickets are from £16. More information and timings can be found on the official website.