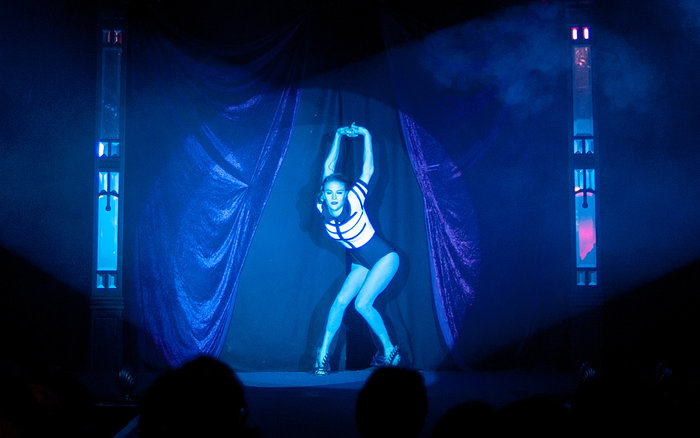 Animal magic and magnetism combine in an unmissable circus ride from the Australian big top wizards. 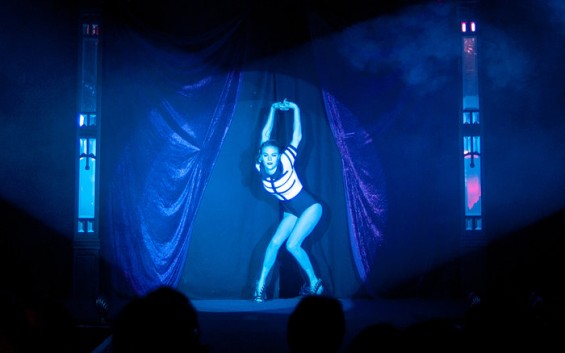 Bridie Hooper and the rest of Beyond’s crew will be at the London Wonderground until 23 June.

Quite what Circa artistic director Yaron Lifschitz was smoking when he devised Beyond is unknown but we would happily buy him another carton if it helps to come up with similar wild flights of imagination. Beyond‘s theme sees a sextet of performers explore the boundaries between animals and humans through costume, props and no shortage of eye-popping circus skill.

Flesh-and-blood animals are banned from UK circuses but the mimicked versions here are no poor substitute. The large white and fluffy rabbit heads worn in the initial sequences lend a Lewis Carroll-inspired motif; an appropriate touch considering the show threatens at this stage to disappear up its own rabbithole with proficient yet ho-hum displays of physical skill.

Thankfully, the show steps up a gear some twenty minutes in and keeps roaring on through to its finale. Unlike current show Knee Deep by Circa alumni Casus, there is a definite crescendo as Beyond reaches its own vinegar strokes.

Performer Rowan Heydon-White is a draw in her own right. Amazonian in stature and strength, the strapping Antipodean blonde flawlessly tackles a multitude of floor-based and aerial disciplines as well as injecting Beyond with her own brand of showgirl flair. In a classic set piece which will linger long in the memory, she demonstrates brawn and brains by solving a Rubik’s cube as other cast members either hang off her shoulders or, in the case of Paul O’Keefe, perch and then stand on her shoulders.

There is plenty to enjoy from the rest of the cast. The flexible Bridie Hooper literally bends over backwards to entertain and, with Billie Wilson-Coffey, performs a heartstopping doubles routine on the silks. The baby-faced Skip Walker-Milne‘s Bear act on the Chinese pole is a fine display of strength and agility; Hamish McCann’s Singing In The Rain is the non plus ultra of pole routines but Walker-Milne brings a youthful joy to his swinging number which points to greater things to come. Gerramy Marsden, though, has a night to forget. The gentleman juggler’s main solo piece sees him spill his cigar boxes a number of times but his confrères do well to rescue the scene.

Beyond contains other more successful forays into sideshow. In one scene, Walker-Milne and Heydon-White both squeeze through a fretless tennis racquet. Fans of La Soirée may have seen Captain Frodo do something similar but Heydon-White takes the routine one step further by having to push not only her frame but her not-inconsiderable breasts through the racquet frame one at a time. This is possibly more a measure of her pain threshold than skill but mesmerising to watch all the same. However, a short rhythmic piece featuring O’Keefe, Walker-Milne and a plastic bottle suits neither Beyond‘s theme nor the talents of either man.

Furry heads and bear suits aside, the animal theme is most apparent through the performers’ movements. O’Keefe shows cat-like agility in a blink-and-you-missed-it backward flip. Hanging from a static trapeze Heydon-White grabs O’Keefe between her powerful legs as he jumps in much the same way that a heron catches its prey while Hooper twists and turns on the silks like an eel perambulating mid-air.

Musically, Beyond is a PRS field day with Radiohead, Rage Against The Machine and Bonnie Tyler featuring in its soundtrack. The lighting adds a real sense of atmosphere to proceedings, especially the thrilling aerial sequences where the action often shifts from the very top of the Spiegeltent to the floor in seconds.

Over its 70-minute length, this a spectacle to be savoured. All this utterly wonderful show is missing to complete the picture is a voiceover from David Attenborough. The lesser-spotted Circa can be seen at London Wonderground until 23 June.