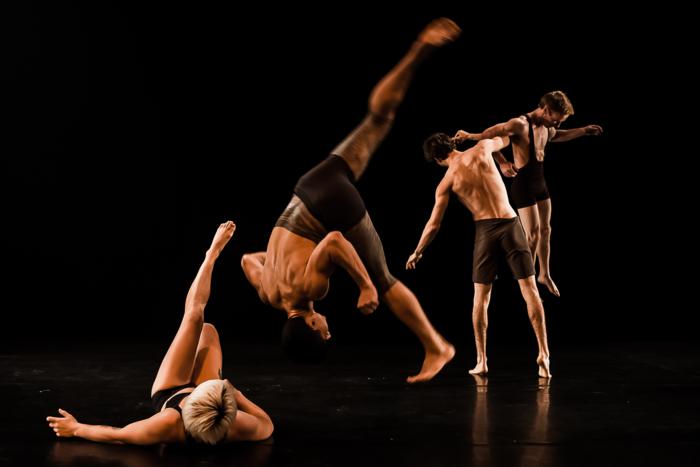 When it comes to humanity under the big top, it is not just about the tears of a clown. Knee Deep, the debut show from experienced Australian circus troupe Casus, examines the physical and mental limits of the human self. 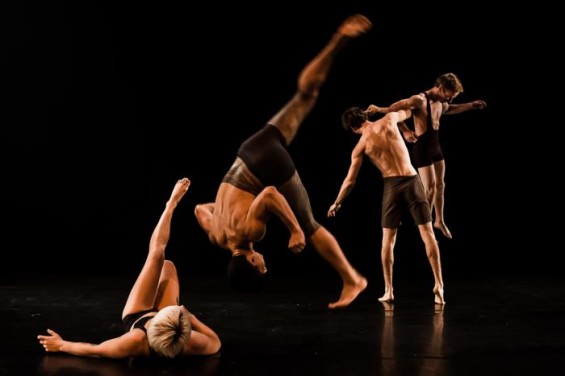 Created in 2011, by the quartet of Natano Fa’anana, Lachlan McAulay, Emma Serjeant and Jesse Scott, Knee Deep is Casus‘ debut production. It has already seen action in Australia and at last year’s Edinburgh Fringe and is now enjoying a residency at Hammersmith’s Riverside Studios until 22 June.

The show’s theme of human fragility and strength is highly relevant in light of recent events which have made manifest only too well how a physical production can go be derailed by injury and misfortune. Southwark Playhouse’s production of Tanzi Libre came to an abrupt halt this week only a few days into a planned month-long run when lead actress Olivia Onyehara suffered an injury. Casus risk a similar fate themselves with their hour-long show putting limbs and lives in the balance.

Structurally, the show consists of around a dozen visual vignettes around the core theme. The opening set piece sets a high bar for the remainder, a bar which is occasionally reached but never truly surpassed. Sarjeant steps onto a stage empty but for a couple of boxes of eggs. She places her weight onto the contents of one box with balance and poise and, bizarrely, the eggs hold their shape. For God’s sake, please don’t try this in Waitrose.

Sarjeant’s vaudeville experience is evident later when she takes to the stage with a hammer and nail. She first knocks the nail though a solitary egg before pulling the nail out, pushing it into one nostril and gently knocking it deep into her skull.

Entertaining though it is, this sideshow trick is an atypical element with far more emphasis being placed on a broad spectrum of technically impressive circus feats including tumbling, hand balancing, silks and a variety of gymnastics.

Visually, Knee Deep doesn’t put a foot wrong. Much like a boxing ring without ropes, the stage is set in the round ensuring that the audience has clear sightlines wherever they are sitting. Much of the action is ground-based and aerial pieces on rope and silks are well-lit and the action is easy to follow wherever it is set.

The flow between episodes is quick and fluid as is the entire show. Those looking for an overarching money shot will be disappointed. Generally, there is an even pace to the proceedings throughout but no discernible high point or crescendo. Thankfully, the end comes before the second law of thermodynamics can come into play: there is plenty enough energy in the individual routines to carry our attention to the finale.

Technically, Knee Deep is near-flawless. The talented foursome dig deep to produce a display never lacking in skill and their co-operative pieces are the real highlight especially when they are quite literally supporting each other or throwing one of the team around. The theatrical elements so brilliantly displayed at the beginning are rarely glimpsed again and a couple of the set pieces — including a tepid silks routine by Fa’anana and a silly hoops routine — sail way under the high bar set by the majority of .

Those who crave the wow-bang factor of Cirque du Soleil productions or a slow build-up to a big crescendo should forage elsewhere. Instead, this is one to sit back and savour. It is a debut production which makes up what it lacks in pizzazz with polish and panache.