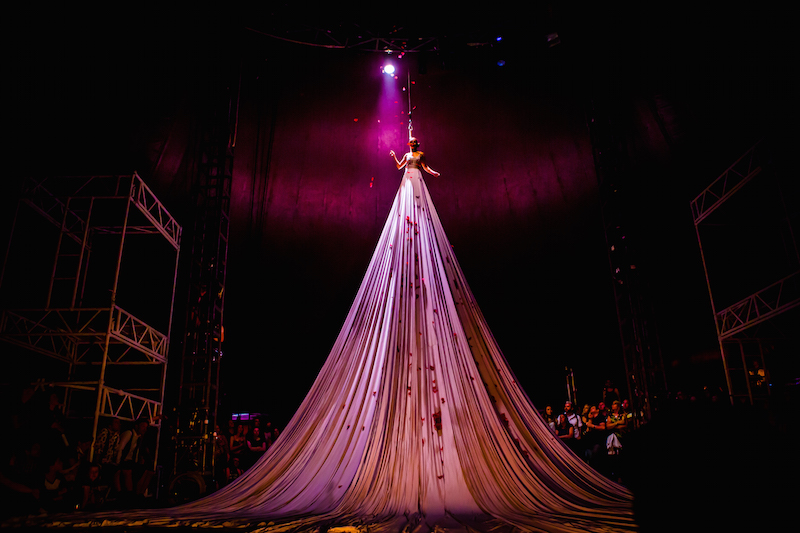 Amongst the iconic images and immersive splendour that wait inside NoFit State‘s silver space-age big top, there is a more grown up undertone to this year’s spectacular production.

In this third incarnation of Bianco, director Firenza Guidi takes her guiding impulses of fighting fear and finding freedom into more serious territories.

Fans will recognise a consistency in dramaturgical structure that leads us through chaos, exuberance, tenderness, and soul-searching to a place of serenity and release.  First-timers will experience a thrilling encounter with circus acts that appear from every which way, as they are herded out of danger’s path by the team of ushers in trademark leather kilts.

There are no seats inside this tent, and we find our existence overlapping and blurring edges with the parallel universe of the performers as they expand and untether out from their initial gauzy enclosure into our space.

While rigging changes take place around and about us, musical director David Murray‘s fascinating and atmospheric compositions prevents the energy in the tent from falling flat. The live band has an eclectic sound, filling our ears with rocky jazz, interspersed with tribal beats and moans, and some traditional Eastern European influences thrown in for good circus measure.

Snapshot scenes explore the multiple ways in which we pursue freedom; the drunken partying of juggler Cecilia Zucchetti’s club manipulations and Anne-Fay Audet Johnston’s jaunty hand-balance nightclub preparations; the tender attempts at connection between the outstretched arms of Angelique Ross on the dance trapeze and her counterweight partner Joachim Aussibal; the personal moments of elation – Fred Rendell in his Cyr wheel, lifted aloft, or Blaze Cummings in the spinning of a rotative hoop that turns around both horizontal and vertical axis under a drift of summer snow.

François Bouvier gives a stand-out performance on the crossed wires, combining the traditional circus disciplines of rope-dancing with the clown’s eccentric dance to create an entertaining routine that engages with the whole audience, charming us with a smile and a wink, then surprising us with a pristine back-flip or back somersault.

Not all the skills elements are world class, and some are clearly visual filler, but it’s the overall impression of #circuseverywhere (to coin a National Centre phrase) that sticks.

Rhiannon Matthews‘ black and white costuming leads us in and out of time and place, but what remains consistent throughout the show is a feeling of heat, of tensions that bubble to the surface and then melt away to lethargic slumber. With its gifts of unexpected beauty and ‘organised anarchy’, no circus will ever be the same after you’ve been a part of Bianco.