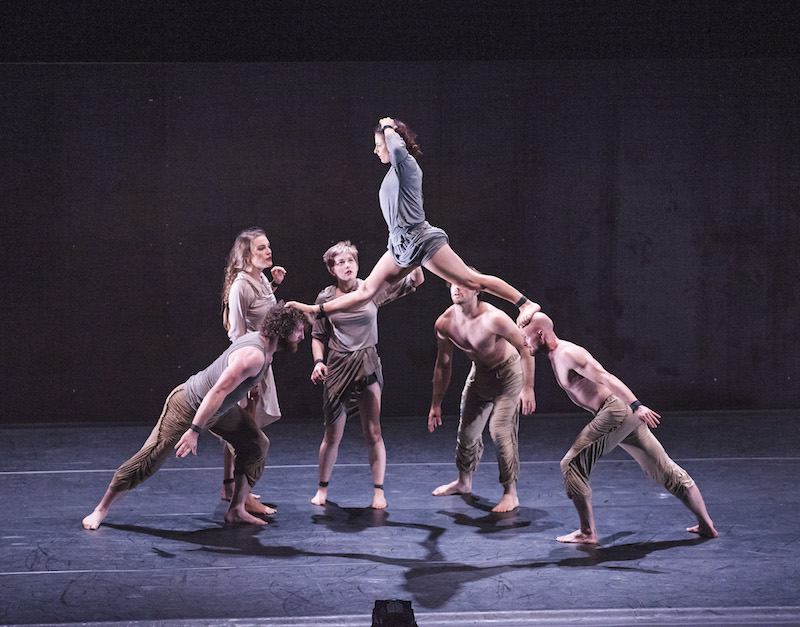 With six musicians performing classic opera fused with electronic deconstructions, and six acrobats displaying the best of what contemporary circus can be, The Return is an audio visual delight from start to finish and a triumph for Australian company Circa. There is just so much to like about this production. It is also performed here tonight in a perfect venue for it: the theatre at the Barbican is big enough for the music and the movements onstage to feel grand, but still intimate for the solo performances. There are some other great shows still to come as part of the London International Mime Festival, but this is likely to be one of my highlights.

The company began in 2004 and has since honed the skill at combining stripped down circus with classical music performed live. The Return does not feel like a reworking of old ground, but rather the realisation of years of refining these elements. Though the performance is essentially abstract and without any kind of clear narrative, themes of loss, breaking down, memory, history, hope, displacement, conflict, drowning are at the fore – ideas which are currently permeating our political discourse with the ongoing refugee crisis.

While the show is very much about group work, and the interplay between the circus performers and the music, the aerial strap work by Bridie Hooper deserves special note for it’s experimentation and originality. The routine is a wonderful moment, all disjointed harsh movements and sudden drops. Elsewhere she is used by performers as a puppet, her extreme doll-like flexibility making her appear possessed. Duncan West also shines as he tumbles, managing to get incredible height and hold positions to the point where it looks like he must hit the ground terribly. Though these two performers stood out to me, the entire cast are fantastic and worthy of congratulations, as is the choreography and realisation by Yaron Lifschitz.

The minimal stage and lighting setup puts the attention firmly on the performers. A warm yellow light transforms the stage from the colder white. The music, as much a part of the performance as the acrobats, is chiefly Monteverdi’s work. At times this is performed as originally composed, at others it breaks down into white noise, electronic sounds and bassy vibrations. This contrast allows a great emotional landscape for the movements onstage (though it perhaps fails to drop hard enough at a few points). Like the circus artists, all of the musicians work well together and there isn’t a flat note throughout.

The Return elevates contemporary circus beyond entertainment and presents a fully formed piece of artwork. It manages to tread the fine line between exploration of movement and beauty, while not letting go of what fundamentally makes good circus: the demonstration of that which seems impossible, the risk of falling, the potential for injury while displaying the limits of what a human is capable of. Circa, it seems, are searching for the sublime. This piece is still evolving and finding its ultimate realisation; already much of the promo is out of date – a three performer trapeze piece that looked exciting has been removed for example – so, like so many other touring circus shows, this should still be seen as a work of constantly evolving progress. Having said that, it currently feels fully cohesive and a real pleasure to experience.

Circa appears at The Barbican until 31 January. More information.