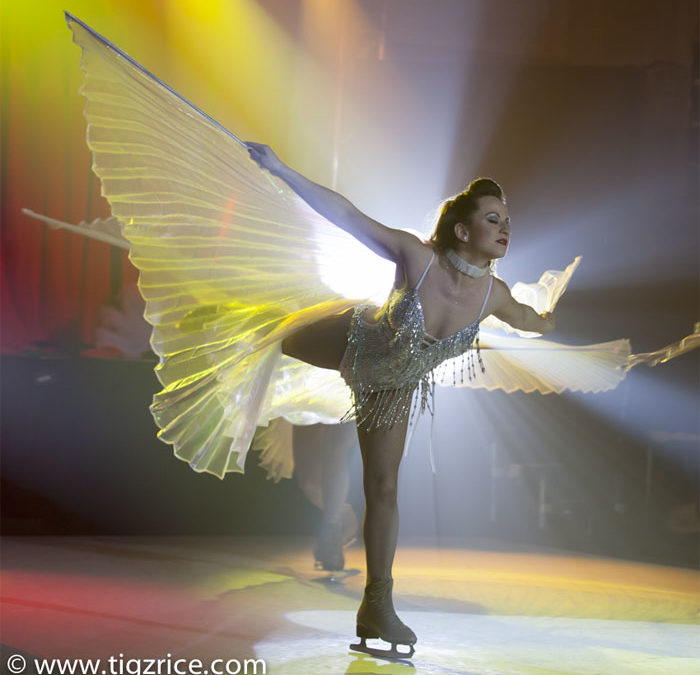 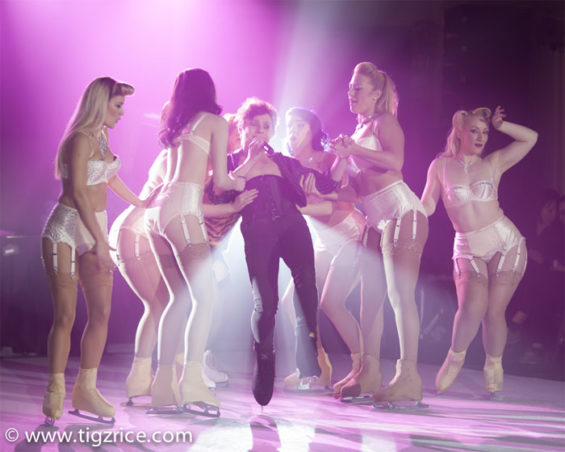 Is there anything truly new under the sun? Maybe. Last week’s Burlesque on Ice at The Bush Hall in Shepherd Bush has all the right qualities to become a refreshing take on both skating and stripping, with its cast of established and emerging burlesquers, a quality coterie of professional skaters and one of the best new compères around to tie things together in a historic West London venue. On paper, this should be an ice-cold killer of a show so how did it turn out?

Early signs are not good. The production is a bold and ambitious show which struggles to keep up with its self-proclaimed mission, something most evident in a first half which sees very little actual burlesque happening on the artificial ice rink. As principal dancer and show choreographer, there are some confident routines from Hollie Deller who is joined by her fellow skaters and the occasional burlesquer but there are no reveals and precious little tease. The only notable burlesque numbers before the interval are performed on a stage behind the rink where MC Joe Morose expounds on what passes for the show’s wafer-thin plot about an ugly duckling skater (Deller) seeking to become a burlesque dancer.

Morose is ably assisted on exposition duties by a seductive and sassy Gwendoline Lamour; as the fairy Godmother of Burlesque, this experienced ecdysiast passes on her own grinding tips to the aspiring Cinderella. Lamour’s show-and-tease is followed by other stage-bound performances from Bonnie Fleur, Jasz Vegas and Betsy Rose.

There are some notable highlights which go beyond these cheesecake examples. The chucklesome Glorian Gray disrobes from within a large and preposterous tiger costume while drag act Danni Dee aka “the legs of London” pulls out every single goddamn one of the stops in her high energy dance number to Shirley Bassey’s Nobody Does It Like Me. London Cabaret Award-nominated Vicky Butterfly, famous for her high-tech costumes and props, dons one of her signature luminous outfits to enact a difficult and perhaps over-ambitious series of twists and turns while on the ice. Between and betwixt the burlesque, there’s some fine ice skating skits but, so far in the show, no overlap between the two disciplines.

A special mention here must go to Joe Morose. Whether his occasional exasperation was feigned or not, he held together a show which at times seemed destined to go off the rails. There is much to admire in his doggedly optimistic manner and exquisite shows of skill whether he was singing, skating or linking to the next routine. He is rarely seen outside his usual Camden haunt which is a shame because, when he is, he has proved to be a veritable crowdpleaser.

While the first half would better be described as Burlesque With Ice, the second half delivers the promised goods. Ruby Déshabillé produces a very confident and flawless burlesque number; by skating backwards whilst elegantly removing her bra, her dextrous demontage demonstrates the essence of what the show promised not least in its teaser video. Jasz Vegas returns this time on the ice to perform some eye-catching magic; to paraphrase that fond chestnut about Ginger Rogers, Jasz Vegas looks like she can do everything that Paul Daniels does, except backwards and in ice skates. Fleur, an up-and-coming leggy streak of brunette beauty, combines well with Trixie Kixx in a sizzling duet which starts on the rink and ends on the stage. This second half eclipses its predecessors in every way by making far better use of the performers and the environment. It builds to a visual crescendo with iceborne burlesquers donning Isis wings to superb effect, the ugly duckling finally becoming a star and a charming all-company hoe-down.

As a production, Burlesque On Ice has some serious flaws in its current state. The plot which has been crowbarred into the show never engages and is carried through the proceedings more by exposition than action. The first half does little to sell the titular premise and sorely lacks the kind of inventive rink performances seen after the interval. The music is cheesier than a kilo of aged Parmesan with Fever, Feeling Good and the double nod to Maurice Ravel’s Bolero being especially lazy choices. Apart from Deller, the skaters are rarely afforded the opportunity to demonstrate their individuality in stark contrast to their stripping sisters who all have solos. Finally, the choice to put the stage behind the rink severely reduces the intimacy of the burlesque performances carried out upon it.

Ultimately, Burlesque On Ice is neither a strip show nor an skating one. Comparing it to either is a fool’s errand. Instead, it attempts to blend two different artforms into a singular entertainment package. This is no doubt an ambitious venture by debut producer Sam Jenkins and, as such, one that should be respected for not only daring to be different but actually coming to fruition in a large venue and with a sizeable cast as well as grabbing decent sized audiences in a week when the latest TFL strike sapped the paying public’s will to step out for some fun. Moreover, in a similar fashion to recent shows like Boylexe, Its Your Funeral and Cabaret Roulette, this is a novel concept with mainstream potential which can grow and change its content while still remaining within its eponymous purview. We look forward to the next iteration of Burlesque On Ice to see if it can truly deliver on what is unarguably an intriguing and eye-catching proposal.

More information on Burlesque On Ice can be found at www.burlesqueonice.com.