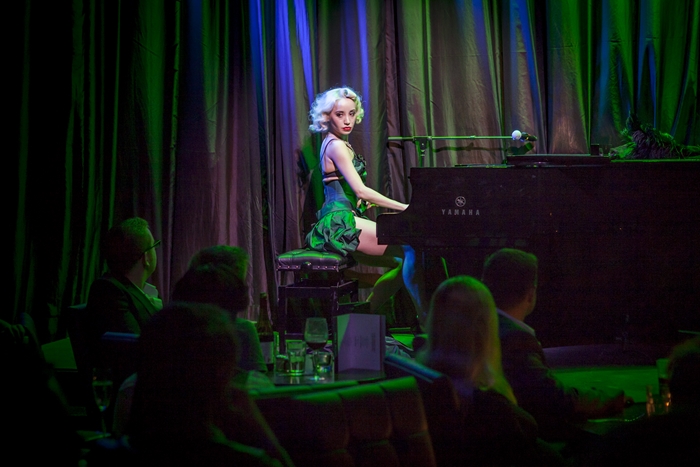 Chrys Columbine’s new show is cut-glass with the occasional shard of crystal. 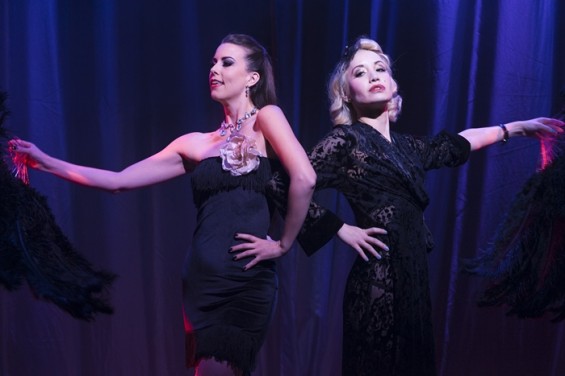 This evening’s performance, at a packed-out Hippodrome Casino, begins in silence as its star Chrys Columbine walks across the stage masked and head-to-toe in black lace. Under a green light and barely visible from sideways on; she’s a dark, ethereal absinthe fairy. Her frame is miniscule and her profile -far prettier than others she’s constantly compared to, is as finely cut as the name suggests. She sits beside a black piano on which a white feathered fan is draped, and plays Moonlight Sonata. The movement of those delicate porcelain fingers and undulating profile above the keys more than compensate for what is good playing yet not exquisite.

As with so many intimate cabaret performances, the host of the evening, having been given a most provocative opener to feed from, has in their hands the power to make or break the evening. The public should feel welcomed, encouraged, berated – whatever it takes –  but included. This does not come from Bouncy Hunter, whose welcome is uncomfortable as it is bellowed through the lyrics of a rock-heavy song and an overly-loud microphone. As a result, the rest of the first act feels disconnected and somewhat awkward.

Lady Catalina, who skips on as Bouncy Hunter exits, is a medical illustrator’s dream: every known muscle-group perfectly pointed out in a petite, smiling, prancing, ringletty package, although one could expect more from the content of both her numbers which see her first bounce a big white balloon in one act before later line-dancing and downing a shot.

When Joe Morose takes over, having strolled amongst us for a while, we have what the show has been missing: someone who engages the audience. He swaggers, he licks people’s heads, he tells us “we’re performers, we’ve all got ridiculously low self-esteem, you have to applaud us!”.

If the world of cabaret were T.S. Elliot’s Old Possum’s Book of Practical Cats, Joe’d be the Rum Tum Tugger. He sings and plays piano with assurance and ease. His patter is occasionally awkward, but what of it? Eddie Izzard was often awkward. He’s like a Tim Burton creation. The man who shows himself adept at playing musical montages of songs cleverly fused together is himself a deviant mash-up of Tori Amos, Helena Bonham Carter and Eddie Izzard.

The charisma of Leah Debrincat would reach the back of Carnegie Hall, so she’s more than up to the task of following Morose. She writhes like a python, performing moves that make her work an altogether more volatile cousin of belly-dance. Her body placement is at all times checked. If at any point one were to take a photo, her limbs would create a sweeping line, even whilst swords spin perilously close to her unflinching face.

The performances after the interval show a marked upswing in quality compare to what went before and none more marked than that of Aurelie Bernard. One barely believes the same lady who swallowed flames in the first act can follow that up by dropping quite so competently into a smiley-faced split with legs that go on into next week between two red silks.

Chrys Columbine’s finale, one of her classic striptease routines which sees her perform whilst playing piano, is a rare wonder. She moves her arms and upper body with admirable speed, however her fan solo earlier in the evening accompanied by Joe Morose singing Radiohead’s I’m a Creep was perhaps her highlight.

The beauty of her act cannot concel though some of its flaws. Columbine’s walk can occasionally appear stilted and, whilst her physique is tiny, there is something about removing a skirt quite so early on as she is still sitting at a piano playing it, that makes any curvature of the spine impossible and so the otherwise stunning derriere looks somewhat flat.

Whilst the evening had a work-in-progress feel to it, there were occasional glints of crystal, if not the whole chandelier.