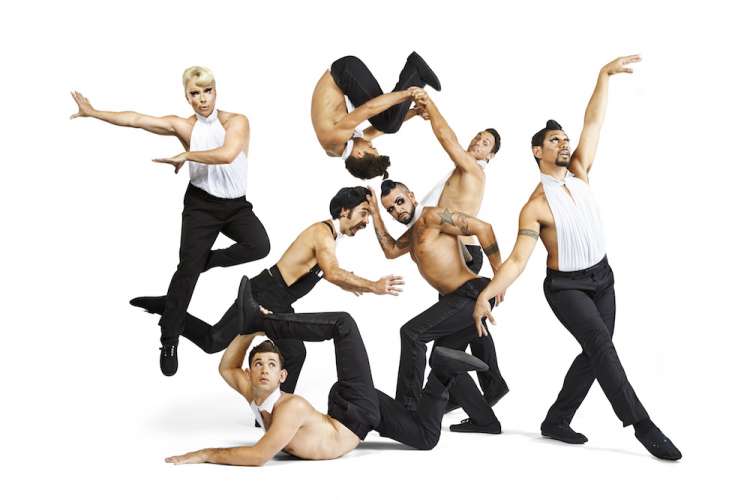 An all-male Aussie ‘burlesque show with balls’, Briefs bounds energetically back into London’s Southbank’s quirky London Wonderground. Four hundred years after Shakespeare’s gender experimenting plays drew gasps at the Globe and bear pits and brothels lined the streets of Bankside, it is nice to know that licentiousness still has a haven in this historic area.

But, while the pleasures of burlesque or boylesque lies in the power to thrill, surprise and subvert, this show which has barely changed over the last four years felt very short of that mark. True, there is a new face on board in drag performer James Welsby but most are familiar too (not least host Fez Fa’Anana and his fellow cast members Captain Kidd and Evil Hate Monkey).

This may be harsh on the good spirited show, perhaps; among the short performance segments (Briefs in name, brief in nature) there were some highly admirable acts.

Firstly and the act that opened the night, was Thom Worrell, one of Australia’s leading aerialists and contortionists. Bending and gliding through his suspended hoop, he brought sensuality to his routine. Thom’s dexterity seemed effortless and almost feline, as if he was stroking and not grabbing onto his apparatus.

The next standout act was a clown routine from Evil Hate Monkey (Adam Krandle) involving undressing a banana. As Krandle unpeels his banana strip by strip, he is visibly struck with pleasure and pain and we enjoyed the awkward surprise of a man in the audience made to eat it. It also had added value for anyone familiar with Samuel Beckett’s absurdist play, Krapp’s Last Tape and its fixation on banana unpeeling for the long opening scene.

But, as a boylesque virgin, we felt let down elsewhere with the lack of creativity, surprise and ingenuity. There was a hula hoop wielding cowboy, a school boy (Louis Biggs) playing with rulers and apples and a Madonna-inspired dancer shaking off her leather to reveal nipple tassels. We even had the King of Burlesque 2011 himself, Captain Kidd, who, glugging and spouting mouthfuls from the massive water bowl prop and striking poses on his trapeze, provided the finale as a sort of real life water statue.

These routines were pleasant but they lacked spark, wit and creativity. It’s strange in some ways this show is four years on the road and still has stayed roughly the same. There were no massive ideas here, or clever choreography that would warrant keeping. At the same venue we recently saw Between the Sheets with its naughty take on the airline safety briefing – that was sexy, funny, subverting and imaginative. Why not offer the same from the guys?

Thanks to its positive vibe and spirit, the show still provides a good time and there is good patter from the elegant and charismatic Fez Fa’Anana, which brings the disparate parts together.

Briefs was ultimately pretty, but failed to stimulate the mind for us. What can we say, we want the lot – talent beauty and brains. Is that too much to ask from the boys?

Thank you to our guest reviewer Belinda Liversedge!