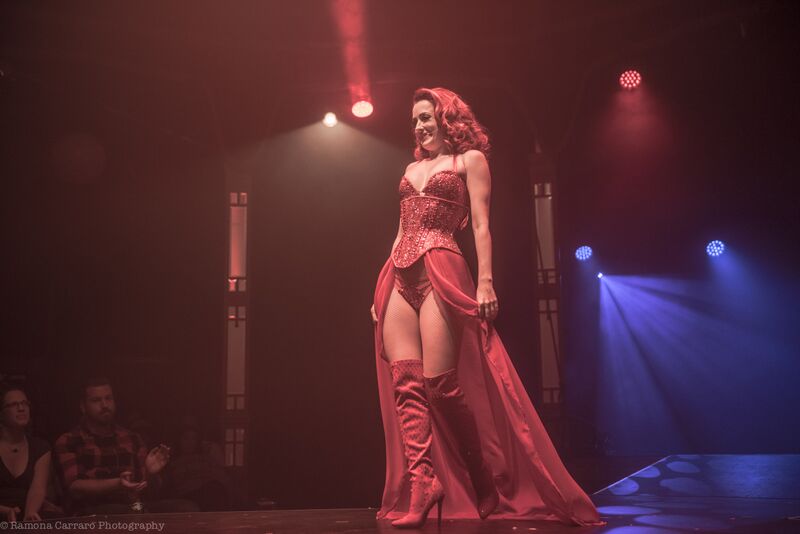 From 12 May, burlesque extravaganza Between The Sheets returns again to the London Wonderground and its fabulous Spiegeltent. Fast becoming an annual highlight of the cabaret calendar, this show has it all: gorgeous and talented performers, routines bursting with humour and wit and absolutely no shortage of sexy charm.

Producer Miss Polly Rae is an indubitable institution of the London cabaret scene. This month, she celebrates ten years as a burlesque dancer during which time she has had notable stints in the West End with The Hurly Burly Girls and has created the naughty nocturnal treat that is Soho Burlesque Late at Hippodrome Live. She has been recognised both in the capital (with a London Cabaret Award in 2015) and around the world: in the latest global poll run by industry site 21st Century Burlesque, she placed 34th overall and 6th in the UK. Demonstrating the depth of expertise in Between The Sheets, its co-star and assistant director Kitty Bang Bang was voted 21st overall and 3rd in the UK.

We caught up with Miss Polly Rae for two exclusive interviews. In this first one, she tells us everything we need to know about the latest version of her hit show.

We’re excited to see Between The Sheets back at the London Wonderground and we’re pretty sure we’re not the only ones. What’s wild, wonderful and new this time around?

I am thrilled that we are back at the Wonderground! This will be our third season and we are working hard to make it the biggest and best yet. The general concept of the show remains the same, so people can expect to see the return of some of their favourite acts like the airline spoof, the Pony Play and of course Kitty’s flaming Absinthe glass finale.

Having said that, we are adding another level of polish to those pieces: expect new choreography, additional concepts and costume upgrades.

“I’m so excited about all the fresh blood. It’s going to take the show to another level.”

And are there any new faces popping up this year?

Yes! First of all joining us is aerialist Yammel Rodriguez of La Soiree fame who will be bringing her Latina sex kitten flavour to proceedings along with, of course, her incredible talent and ability to make eyes water (and seats wet).

We have two new male performers Tom Cunningham and Myles Brown who will be taking on the “boylesque” roles in the show. I am so excited to present a very special new number from them that is sure to get pulses racing. Also in the mix will be the amazing burlesque and drag star Lilly Snatchdragon who is sure to shake things up in the best possible way! Along with the astonishing aerialist Hugo Desmarais, the hilarious Friski Mivaj (also known as Laura Corcoran) will be back and is directing the show for the third year. Kitty, as well as being assistant director and choreographer this year, has some great new upgrades planned especially for her finale performance – it’s going to bring the house down!

Our fabulous Art Director Klare ‘Yaya’ Wilkinson is dying to get started on new costumes and has awesome new ideas for lighting effects. We also welcome the wonderful Tom Gravett from Yellow Entertainment who is producing the show. I’m so excited about all the fresh blood, it’s going to take the show to another level.

Between The Sheets is one of the very few shows at the Wonderground that comes with its own sponsor. Will you be continuing that this year?

Both of these brands synergise with ours perfectly and it is wonderful to be able to showcase their incredible work all the while looking fabulous on stage! We work as a team and all benefit from the partnership as it opens us up to each others audiences.

“It was very important in among all the dirty basslines, sex and sensuality to have a moment that represented real love.”

A characteristic which sets Between The Sheets apart from many other burlesque shows is the poignant love scene acted out between Phil Ingud and Callum McDonald. How did that section come about?

That duet became something way beyond anything I had expected. The original concept came from director Laura Corcoran and Kitty Bang Bang who put forward the idea of the duet between the two boys and also Antony And The Johnsons’ Hope There’s Someone.

We as a team, felt that it was very important in among all the dirty basslines, sex and sensuality to have a moment that represented real love, specifically the relationship between two people. It is something relevant to all of us and we really wanted the show to have that poignant, emotional moment and a real human connection. I suppose that it isn’t something that would be traditionally touched on by a burlesque show, but we felt that we couldn’t talk about sex without addressing the emotions behind it also.

Phil took the brief and really did wondrous things with it, drawing from his own experiences and the duet became the story of a relationship in trouble. This year’s duet will be performed by our new male cast members Tom Cunningham and Myles Brown. We are developing something new with the boys that will probably be closer to our original brief, but hopefully just as poignant and memorable.

You’ve worked in some of the grandest venues in town, not least London Wonderground’s big top. What do you feel being in the Spiegeltent adds to the Between The Sheets experience?

I love that the Spiegeltent allows us to create on a bigger scale yet it still remains very intimate. I love that we can get into the crowd and up close and personal with people. Although they are grand and great for production you can’t do this in a standard theatre so I feel in a Spiegeltent you somewhat get the best of both worlds. Obviously for a cabaret audience, connection and interaction is very important and Between The Sheets is as much about the audience as it is about the show so it’s a perfect space.