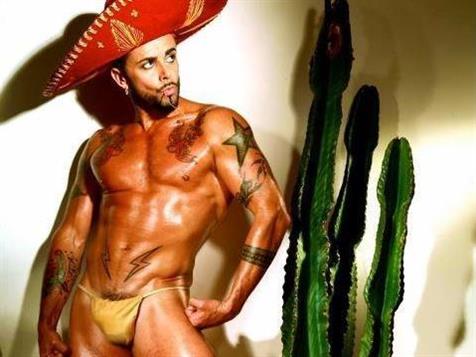 London Wonderground once again hosts the circus-burlesque-drag-comedy collective that is Briefs. Hailing from Australia, their ever-popular and critically-acclaimed Second Coming is on its third outing at the Southbank venue.

The show brings together two of finest male performers in the world according to the renowned Burlesque Hall Of Fame in Evil Hate Monkey and Captain Kidd. The latter is famous for his bird bath routine which sees combine the huge prop with an aerial act.

We grabbed five minutes with the Captain before he stepped foot back on Blighty to ask him about politics, love and rivalry.

Welcome back to London! Is there anything or anyone you look forward to in particular when you get here?

I look forward to two months of a stunning London summer thanks to global warming, catching up with some dear friends, Marawa’s Hoopermarket, the assortment of food and vintage markets, pub lunches and of course our #briefsboys who are repeat offenders at Southbank’s Spiegeltent!

I think two months of summer may be a bit optimistic. How do you keep fit on the road? Do you bring your own gym apparatus with you?

I keep fit on the road mostly by a good yoga and strength regime pre-show! Hula hooping and disco dancing is a winner too! I love exploring cities that i visit so I will end up walking miles which is the best excercise! Being “show fit” is important especially on long tours.

How do you manage to maintain personal relationships on the road?

Being on the road and being in a relationship can be interesting! Luckily my partner in crime and passion is Briefs’ bearded lady and ringmaster Shivannah.

You’re quite political on social media. If you stepped into Tony Abbott’s shoes for a week, what would you set in motion to improve Australia?

If I stepped into Tony Abbot’s infamous budgie smugglers for a week, I would do Australia a huge favour and resign. I would then spend the rest of the week as a volunteer at refugee camps and remote indigenous communities.

Briefs has been a part of your life now for quite a few years. What makes you stick around – is it just the fabulous company or is there more?

Briefs has been such an integral and amazing monster that myself, Fez and his brother, Natano created over five years ago. I am very proud of where we are as an independent company that tours on average 30 weeks of the year! The freedom as an artist is a big highlight, creating work that is skilled, entertaining and boundary pushing is another. And of course our freak family! The Briefs boys are a special and hilarious bunch – sharing the stage with six other lads is too much fun!

Finally, what is it like having another Burlesque Hall Of Fame King in the show with you?

This is a special thing indeed, especially the things we do to each other onstage. We have a lot of fun on and off stage and our only rivalry I would say would be who can shimmy and shake their bits the hardest.