Review: Between The Sheets, London Wonderground 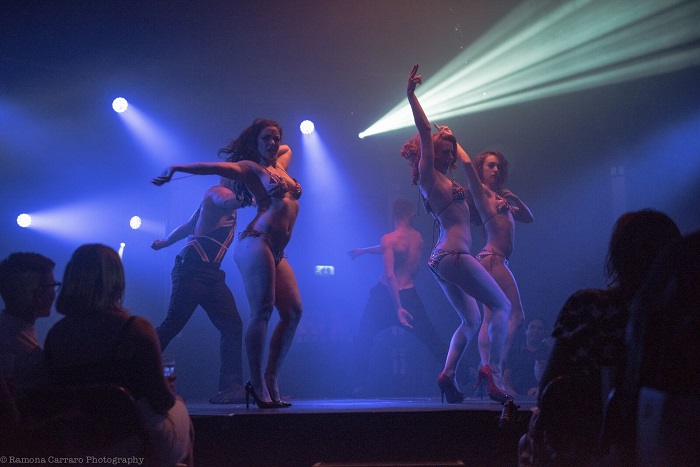 A counterpart to her Hippodrome residency, Miss Polly Rae’s Between the Sheets is a show on a much larger scale. Tonight, we’re at the London Wonderground’s Paradiso Spiegeltent on the South Bank, arguably a more appropriate venue yet less so if we’re kept waiting outside under a footbridge, 15 minutes past the billed start time of 9:30pm in a damp queue amongst all the aromas you’d imagine (for those devoid of imagination: puddles of urine and alcohol) but we press on.

Polly’s in no rush to get you between her sheets. There’s a 15 minute interval involved too, so if you’re running for a train at midnight, make sure it’s from Waterloo. That said, any performance where you’re given free personal lubricant on entry (sorry) gets our attention, if not our immediate vote.

Madame De Voila, a staple in Polly’s boudoir, still has an enviable split spike when performing her trademark removal of a stocking. She presents a sombre striptease, removing first a huge Ascot Gavotte-style hat, albeit aloof in manner and less in-keeping with the rest of the evening. Her husband Stephen Williams takes some risks with his straps solo and the result is as faultless as his aerialist torso.

Phil Ingud’s crossfit-style solo comes a close second to his Skype call routine of previous years, but it does see him perform burpies, jumping jacks, split lunges and exit the stage in only a tube sock. Well played.

The numerous ensemble pieces elevate this show beyond cabaret-style, compere-and-solo burlesque and are without exception superbly executed. From Polly’s dark and melancholy Oops backed by Kitty Bang Bang and Madame de Voila in identical mirror frames, to Callum McDonald and Phil’s poignant and lift-heavy pas de deux exploring the painful end of a relationship, to the vastly improved flight attendant Feeling Good number from the 2013 show (aka “Sleazyjet Flight 69 to Lesbos”) these are the glue of the current production rather than its weakness.

Frisky Mivaj (one half of cabaret mash-up duo Frisky & Mannish) is a tornado of a performer, a fluorescent Vicky Pollard in tin-foil and huge bangles, chopping and changing her vocal stylings from Nina Simone to Tinie Tempah. She uses Callum and Phil as her lackeys, remarking “I know, the butchest thing on this stage is me”, to take us on a candy-themed and later jelly-fuelled romp. She has impeccable timing, immense stage presence and a great voice, managing to lament the loss of dignity in society whilst still exclaiming after a powerful vocal in Pour Some Sugar on Me “When I say sugar, I do mean penis.”

Kitty Bang Bang looks beautiful this evening. She could always fling fire. She could always crack a whip. She could always stub out a cigarette on her tongue, but her commercial dance skills seem recently enhanced here. Here, she is ablaze – literally, from the nipples, whilst thrashing joyously in a martini glass of absinthe. Perhaps Madame De Voila has taught her to spike that leg. Whoever it was, they did a great job.

Everything that happens onstage is underpinned by Rae’s touching reverence for her fellow performers. The fluidity and genuine camaraderie between supremely talented artists is what sets Between the Sheets apart. It is by far the ensemble burlesque show of 2015.

Between The Sheets returns to the Spiegeltent on 9 and 17 September. More information can be found on the London Wonderground website.