Lucky 21: Why Joe Black Is The Happiest Drag Queen In The UK 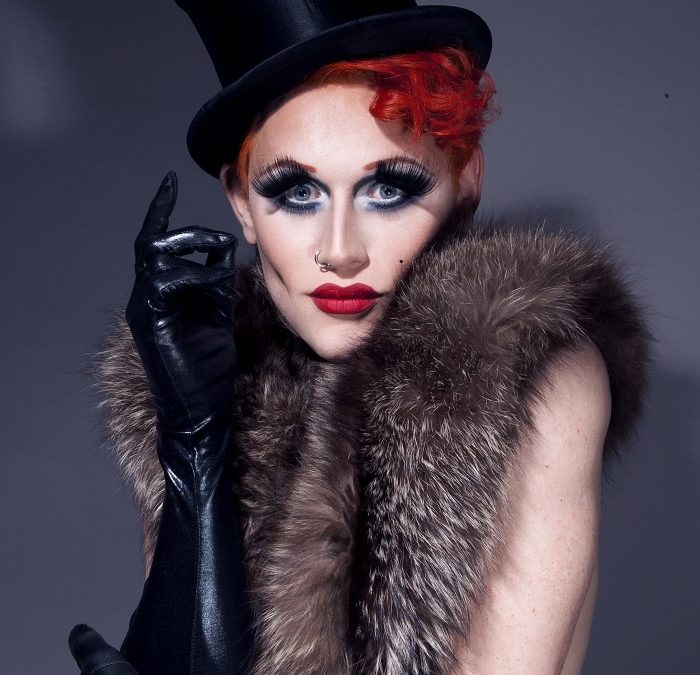 When global megastar RuPaul announced that she and her media partners TruTV were hankering for a UK Ambassador for that little old show of hers, drag queens from Glasgow to Brighton raced to enter the competition.

Almost a hundred video entries poured in for Ru and her crew to pore through. They were looking for twenty finalists to judge in a live event at West London’s Cafe de Paris this coming Thursday.

Except they weren’t. After seeing what the UK had to offer, they stretched their own rules and picked a 21st finalist in cabaret’s dark prince Joe Black. The singer and pianist released an album in 2013 and, now based in Brighton, Black has toured around the country with the House of Grand Parade while still producing and hosting his all-star House Of Burlesque in Portsmouth.

So just how did Black make the final cut to the RuPaul’s Drag Race UK Ambassador?

Congratulations on making it to the finals of RuPaul’s search for a UK Ambassador! It was a touch and go for a while. What happened there?

Well. I got the decline email at the same time as everyone else. Obviously, I was a little disheartened, as the whole competition and results had been the only thing on my mind since i uploaded the audition video. On my social media, I let people know that I hadn’t made it, though made sure to congratulate those that did. I felt that it was a tough competition and they deserved to be congratulated!

Then I got a notification that TruTV UK had commented on my Joe Black fan page update about the competition with “Please check your email.”
Curiously, I checked. They had sent an apology and to ignore the decline email. They said they had just been on the phone to RuPaul and they were extending the final 20 to 21, specifically to fit me in. Cue my hysteria. It was probably more shocking because, maybe an hour before, I had just resigned myself to having not got in!

Are you an avid RPDR fan? Who is your favourite RPDR queen and why?

Absolutely love it. Favourite queen of all time on there is Jinkx Monsoon. We became friends and chatted online while that season was airing. We then managed to meet up when she came to London. We’ve been friends ever since! We hang out whenever she’s over on our fair British shores.

And who has caught your eye this season?

You’re not primarly known as a drag queen or even as a drag act. What made you enter this competition?

My look is androgynous and at times entirely genderless. Well that’s the aim anyway! And when i’ve performed during drag shows, occasionally someone will say to me “But…you’re not drag?”

I’d say I have a reputation as a drag clown. Drag has influenced the way I look so much over the past couple of years. It’s helped me hone in on where my inspirations are and given me the enthusiasm and drive to help make that a reality on my appearance for stage. I entered with a “Well…Why not eh?” intention.

I feel that I’m just as drag as the person with the sequin gown and the amazing up do hair. Drag is about transformation, whether you’re transforming into a beautiful woman or transforming into a deranged clown that looks as if they’ve crawled out of some seedy Weimar Berlin nightclub. I wanted to go into show proving that drag doesn’t just have to be one thing! I think that the list of those who made it to the final totally show that. So diverse!

If you’re weren’t forced to lipsync to a RuPaul track on your competition video, which song would you have chosen?

Marlene Dietrich’s The Boys in the Backroom!

What do you look for when watching a drag queen? Is it about the outfit, the singing/lipsyncing, the patter or something else?

I want them to just be incredible, in whatever way they do that, whether it is an incredible look, incredible singing skills, lip-syncing skills, dancing, magic, puppets, hand balancing, aerial, breakdancing. anything. As long as they excel at what they do. It shows how much effort and time they’ve invested in it and really worked at their particular craft.

If you had to spend a week on a desert island and your only companion was a drag queen, who would you pick to be with you and how would you while away the time?

Good luck to Joe and the other 21 contestants. We’ll be there on the big night reporting live and direct.