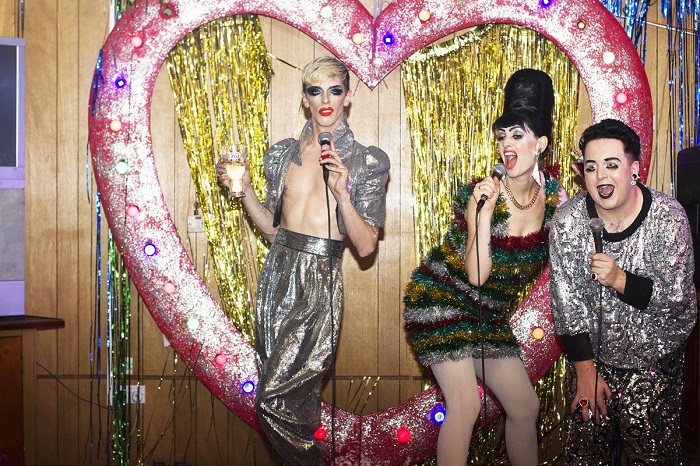 Say it quietly but cabaret sometimes happens outside London. We sent in editor Nicola Rainbow to check out the Latitude Festival’s cabaret tent. She’s already revealed the good and the not so good of what went down on Friday but how did the Saturday and Sunday line-up fare?

As Buffy once (badly) sung, where do we go from here? Friday night was a mixture of stand-up and drag queens with a big finish from a star of cabaret. What, I wondered, did Saturday have to offer?

Once we’d eaten our way out of our hangover and headed into the arena, I went straight to the cabaret tent to see what was on. As it turns out, not much. There were acts on throughout the day but, and this is an important point in my opinion (which, FYI, means it’s worth listening to), it’s very hard to make cabaret work during the day. I poked my head in when the double act of Lazy Susan was on. I waited a few moments and concluded it must be for kids. There were silly accents, squeaky voices and very large, am-dram type gestures. I backed slowly away and went to, sensibly, find the beer tent.

Cabaret at festivals is a hard one to call. It seems impossible (and I’ll come back to this with Bourgeois & Maurice in a moment) to put good cabaret on during the day that requires an involved audience. Sweaty, intimate, saucy, sexy and funny cabaret needs darkness, a lubricated audience and good lighting. This is hard to achieve in a tent that will not be pulling in huge punters at this juncture (we need representation of bigger names at these things!) and so will not have much spent on it.

Here’s my beef with Latitude’s cabaret tent: there was no burlesque. None. Nada. I saw nobody wearing any tassels and very few sequins. This tent needs burlesque like the Peacocktail bar outside needed burlesque performers to serve bubbly wine to. There’s also a severe lack of variety. Stand-up? In a cabaret tent? Where were the hand-balancers? What about some circus? If you need cabaret that works in the daytime then acrobatics would be great, something kids and adults can be amazed by. I wanted jive dancing, hula-hooping, perhaps lessons on how to do either. Outside was a huge dance stage being used by teenagers learning to belly dance. Why was this not being utilised for a burlesque lesson? Or, better, how about Burlexercise? I could have done with that after all the noodles I managed to ingest.

But apart from what the tent didn’t have, who did it have? You can’t imagine my joy at hearing Bourgeois & Maurice would be performing. I mentioned earlier how cabaret worked best when the lights were low and the audience is well oiled. B&M were put on at a pre-watershed 8pm when young kids were still in the audience. Luckily, Bourgeois only used the C word once but, as he quite rightly pointed out, “you brought your kids here”. Afterwards, Bourgeois told me that he hadn’t even seen the kids in the audience, the lights were that bright.

The pair had an uncharacteristically shaky start with some tech problems and a lyric-memory lapse, but to their credit, they get the audience up and dancing at a rather sedate 8pm, and Bourgeois tells us that he has “no f*cking clue what cabaret is”. As usual with a B&M set, this led into the next song with a story about their journey through learning what cabaret is (not too dissimilar from their journey into what ‘love’ is). Speaking about how they created the Greek crisis was a natural introduction to their biting commentary on EU affairs called Goodbye Europe, with Bourgeois’ voice in fine fettle, although a memory hiccup was an issue again right before the critical line about Greece. Once again, crisis was narrowly averted and the pair were back on track.

In true B&M style there was a lot of wandering through the crowd and involving the audience members with slick one-liners and engaging banter. Bourgeois managed to pull the punters in his performance and said that Latitude was basically, “one very big…polite….orgy”. It was all rounded off with their pyrotechnics: bubbles! Actual ones, not wine ones. Their act would be spot on if they had been placed later on in the bill, perhaps after the next act (Scottee at 10pm). They were great in a tent, they were great for Latitude and they brought some much needed pizzazz, but perhaps 8pm was a little too polite a time to enter an orgy.

At first glance I wrote Scottee’s Party Piece off as lazy cabaret. The premise was this; before the show the audience members were asked to put their drunk party tricks into a hat with their name. Throughout the show Scottee would pull the names out and call up each person. He also roped in Bourgeois & Maurice to judge the performances and see if the act would go through to “Judges Houses”.

I was ready to watch the show and write about how bored I was watching audience members do bad impersonations of famous people. I was actually really pleased that it was hugely entertaining. Basing your entire show on audience participation, especially at a festival, can really backfire on a performer. All you need is to pull up some completely w*nkered twat and end up trying to push them offstage after fifteen minutes. Thankfully, the audience members chosen by Scottee and his assistant Rachel had a great mixture of actually rather skilled people miming to Scissor Sisters songs and the right amount of crap drunk party tricks that involved doing unfathomable things with cups.

Bourgeois & Maurice kept the laughs going with their judgement on each party trick, and both Scottee and Rachel have skits they perform in the show, so that the audience aren’t relied on entirely to provide the material. Rachel’s “Amateur Fruit and Veg Sculpture” was not only funny but skilled, and Scottee’s “aggressive origami” showed talent. The performance poet who won in the end was described by Maurice as “Pam Ayres meets Kate Tempest meets genius.” Only at Latitude would you get a young man onstage voluntarily reading a haiku he had written about being off his tits at a festival.

Scottee finished the show by getting us on our feet dancing the macarena, and I felt somewhat shamed by my preconceptions of a show that was pithy, funny and had a good amount of zing and sass.

Nina Conti, a ventriloquist known for putting puppets on audience member’s faces and manipulating their speech, was on early afternoon on Sunday. This drew the biggest crowd at the cabaret tent, presumably because she has a TV career and people had heard of her. This is certainly not a bad thing. Who knows if any of these people would have come to the cabaret tent otherwise, but the important thing was a big name had drawn a big crowd. More of this please, Latitude.

True to form, Conti brought out the face-masks and had an entire family onstage, some being controlled by Conti, some controlling each other. Conti put a lot of trust in, not only her own ability to pull this off, but the young girls in charge of controlling their parents. For one woman alone, it was impressive. The whole piece was improvised and was created by Conti and the family members onstage. As with Scottee the night before, it’s a tough ask to get your audience to perform for you, even tougher to ask them to perform without performing as you talk for them. At one stage Conti brought the two young daughters up, and when she struggled to talk for all four of them she focused on the youngest girl talking like she was a “dirty old man” – very Pantalone. This, being unexpected, brought the most laughs and so Conti, like a pro, focused on playing this voice off against the others. Before that point, the scene was in danger of falling rather flat, as she struggled to control so many people. As it was, she managed to save the moment, which showed she was paying attention to the show and could see what needed doing to lift it. She makes a difficult ability look easy.

She ended with a short skit where she turned herself into a human puppet. Whilst this was amusing, she had her back to the audience which somewhat took away the essence and illusion at the heart of ventriloquism. The funny thing was, I could see her face from the side and she was still talking with her mouth closed! I bumped into Conti as she came offstage (hobnobbing klaxon) and she asked me the time. I told her, and she realised she had come off the stage ten minutes too early. She asked the stage manager if she could go back on, and when he said no she looked genuinely upset. She spoke to me for a minute and I could see that she had felt as though she had let the audience down. It was really a mark of the kind of performer who does this not just for themselves, but in order to share it with people. I thought that this exchange really summed up what cabaret is for me, and what needs to be remembered when booking a cabaret act. Get someone who doesn’t come offstage saying, ‘YEAH! I finished ten minutes early and nobody noticed!’ Get someone (good) who needs to be dragged away from a hungry audience.

Were you there in the tent? Let us know what you think in the comments.