Facebook stalking, an awkward ceiling and over-efficient email: these are just some of  the trials and travails faced by Scottee and Rachel Porter as they worked on The Worst Of Scottee. Below, Porter goes deep into the fascinating story behind the eponymous star’s first solo show before its London debut next month at the Roundhouse.

When Scottee first asked me to be involved in the production of his debut solo show I jumped at the chance. At that point the image in my mind was of a flamboyant cabaret show with excessive amounts of sequined costumes, a stage covered in glitter slash and perhaps a raffle at half time. If you’ve seen the show then you’ll already know that the reality was very different.  The Worst of Scottee is a presentation of the worst aspects of Scottee’s character.

Whilst there may be the odd familiar song from Scottee’s repertoire, this performance is more formal than his other shows; it’s stripped back, honest and there’s not a sequin in sight. But in spite of the slickness of the finished production, the journey there was just as messy as one of Scottee’s club acts. We ran into our fair share of problems along the way, both practical and ethical. In no particular order here are my top five trickiest moments of the making of The Worst of Scottee.

1. Getting close with enemies

Scottee’s initial idea for the show was show was born out of the fact that there are a lot of people from his past who no longer talk to him. My first task was to get in touch with these individuals and invite them to take part in a filmed interview where they would discuss their history with Scottee. The participants were not supposed to know who they would be talking about until the day to prevent them from over analysing their responses. This meant I had to contact them saying that an anonymous person from their past was making a theatre show and wanted them to come and talk about stuff that happened ten years ago. They’d be given £50 for their time and some tea and biscuits.

Finding them was a tedious and ethically dubious process comprised of serious Facebook stalking, defunct email addresses, unrecognised telephone numbers and in one case sourcing a surname in an address book from 1997. Suffice to say, when I did manage to make contact, people were suspicious. Out of the eight or so that I contacted half never replied, a few declined (some more politely than others), one insisted they know the identity of the person, another guessed it was Scottee almost instantly, and two were bemused by the whole thing. In the end three people participated. Their interviews became the skeleton of the entire show.

2. Learning how to pivot

The beautiful Photomatic machine, design by James Lewis of Tin Shed Scenery, is one of most striking and clever pieces of set design I’ve seen. It looks amazing onstage, when you can get it through the door. Our compact Fringe venue had the right measurements in the tech spec but when we arrived we discovered the ceiling dipped down by the doorway meaning getting the machine through the door was like trying to get a wardrobe in a Wendy house.

Luckily our technical manager Hattie has impeccable spatial awareness and after much manoeuvring found there was a precise angle and pivoting technique that allowed us to get it safely inside without having to saw it into bits. Of course, we then had to do this twice a day for a month in the five-minute turnarounds before and after the show. Our struggle with the set continues to this day as storing it in London between regional performances is ridiculously expensive and falls outside of the touring budget. With this in mind if you have a massive studio/living room/conservatory/shed and fancy playing host to an oversized photo booth, please get in touch.

The first load of press shots were actually taken in a photo booth. The results are great but what you don’t see is my hand just out of shot attempting to pour black food colouring at just the right time for it to run down Scottee’s cheek as the flash goes off. This took a lot of attempts and the floor of the photo machine at The Roundhouse is perhaps stained for life. Also we ran out of pound coins about half way through, and the local shops in Chalk Farm were extremely reluctant to give me all their small change.

At the start of project Scottee set up an anonymous online questionnaire where people could send him their own thoughts about what his worst characteristics were. He sent the link out across his mailing list and social media platforms and waited for the comments to flood in. However, he hadn’t quite braced himself for the tsunami that ensued. In under a week there were over a hundred messages ranging from cutting one liners to page long vitriolic attacks. I had even begun to draft my own response but found it too difficult to write, let alone actually send. He read some of the comments to me over the phone. He laughed them off, but it was clear a few had really stung, and in some cases I think he knew who had written them. After that phone call I finally sent my own response: “the worst thing about Scottee is he cares too much about what other people think.” He closed down the questionnaire not long afterwards. The comments were not used in the final piece. 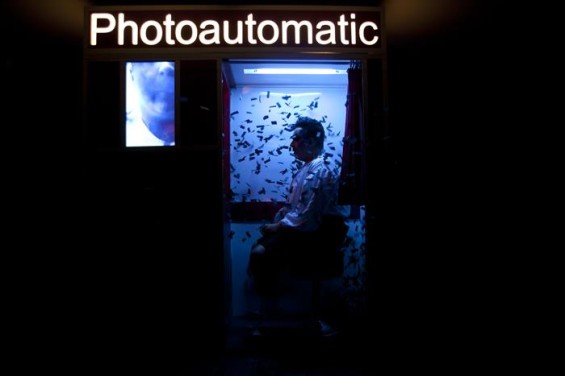 During the Edinburgh Festival I tend to get a lot of emails that are just faceless promotions and I end up marking a lot of it as junk. If you do this enough Gmail, in its attempt to be useful, begins to automatically filter things that look like junk out of your inbox. This backfired when Total Theatre sent a mass email invite for nominees to attend the award ceremony that landed straight in my junk folder. Scottee, convinced his lack of invitation was deliberate, made up his mind not to go. Luckily I rang Total Theatre who assured me he was very much invited and insisted it was important that should be there. I dragged him against his will to the ceremony where the show was awarded the prize for Innovation and Experimentation. Moral of the story: don’t be stubborn and don’t trust Gmail’s junk filter.

The process of making this show was consistently stressful, at times upsetting and utterly worth it. I learned a lot, not only about Scottee and his past but also about human interaction. For me, this is ultimately what The Worst of Scottee is about: the ways we communicate, or fail to communicate, how we misunderstand each other, hurt each other, why do we lose touch, and how do we stay connected.

Related reading: Scottee on why he loves the estate life

The Worst of Scottee is on at The Roundhouse, London from 4-15 February. For more information and to book tickets please the Roundhouse website.

On 15 February, you can also catch Scottee at Rich Mix. He will be hosting and trying out new works at “new performance poetry piss up” Fraff as part of IdeaTap’s Takeover:Love Festival.