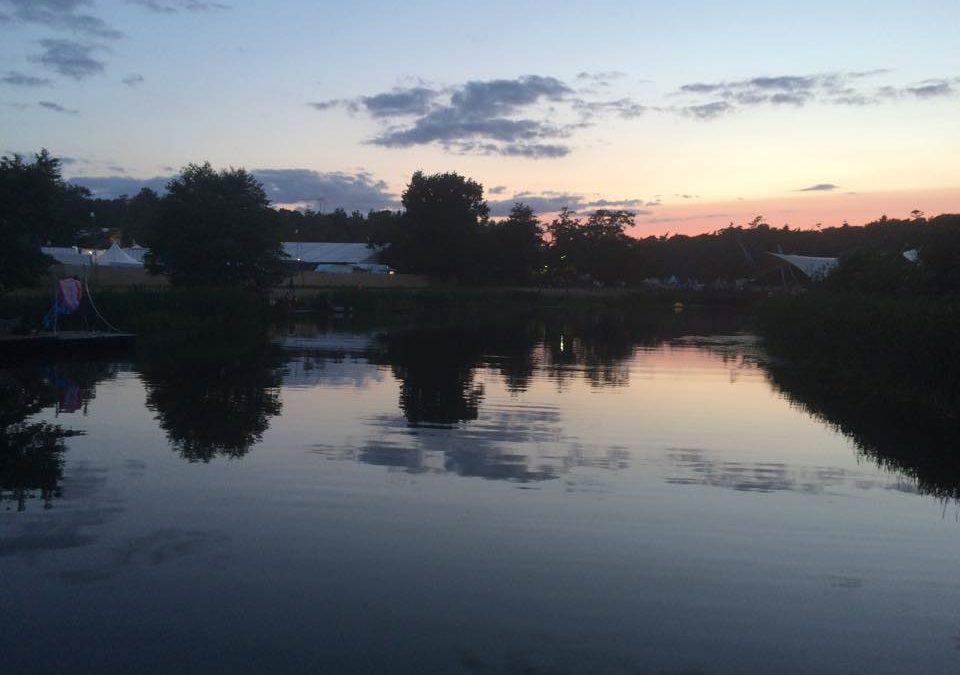 Say it quietly but cabaret sometimes happens outside London. We sent in editor Nicola Rainbow to check out the Latitude Festival’s cabaret tent.

Latitude has a reputation, as a festival, for being the home of homemade taramasalata, quinoa sandwiches and bulgar wheat salads. It is known for its Grauniad tendencies, as shown by Sunday night headliner, Noel Gallagher, when he said: “This is like a Guardian readers’ rally.” Said, as the Telegraph pointed out, by the London-dwelling millionaire.

Gallagher may have a point. I spotted a packet of ‘Attitude’ carcinogen-free, green apple and basil hypoallergenic ‘Dishwashing Liquid’ by the fresh water taps, and heard a woman shout, ‘Talloulah!’ at her young child. I was asked by a man for a few spare teabags but I only had little packets of Twinings Ceylon to offer him (with dairy-free coconut milk).

Then again, the festival isn’t as highbrow as some people would like to think, at least in comparison to its competition. Glastonbury buries itself deeper into the land of the destructive drug-induced, tent-burning wanker with headliners like controversial rap star Kanye West, who declared, with no hint of irony, that he was the “greatest living rock star on the planet” (courting media attention for continued coverage post-festival, anyone?). Reading and Leeds continue to create a great place for 17-19 year-olds to be penned in, allowing prematurely grey-haired parents a weekend away. Indeed, festival-goers who just like to hang out in a field listening to great music, whilst still being able to shower, are searching for a place to go that won’t involve being bundled by sixteen blokes dressed like Scooby-Doo all on a stag weekend.

Latitude fills that gap nicely, with its fantastic mix of art forms. It also helps that the festival is incredibly child-friendly without being overbearingly childish, and there’s plenty of art and fun escapades for the younger ones that doesn’t get in the way of the grown-up fun. This may be where this Suffolk festival has got its reputation from, but if this keeps the pisshead stag parties and vomiting students away so I can enjoy some immersive theatre in a fairy-lit forest then I’m all for it (houmous optional). 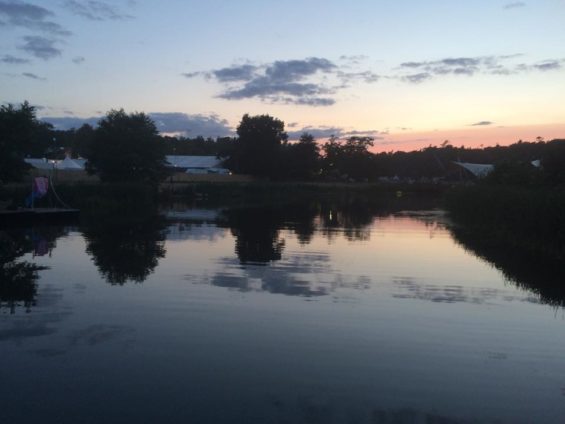 Latitude as the sun goes down.

So, with that in mind, how does a cabaret tent fit in to this world? Well, for one thing, Latitude still sells booze. There was a Peacocktail van selling prosecco outside the tent, so strike one in the cabaret world: there’s bubbly wine and cocktails. Already I’m on board. Secondly, they’ve crafted a really striking red tent that can be split into two parts. This, to me, shows a festival that knows what they’re doing when it comes to cabaret. Here’s the thing: quite often a cabaret performer will be put on a big old stage with the audience a few feet away. The beauty of a really good burlesque performance, for example, is that you can taste the sweat (anyone’s), you can see every sequin, and the tension and tease is ramped up to the max. This just cannot happen if there’s bright sunshine outside and the performer is miles from the audience. Both sides of the stage have the all-important stairs that lead down to the audience for the essential mingling, and also falling down if you’re a desperate ‘comedienne’. More on that later.

Upon arrival I headed, with my can of G&T, to catch the end of Dianne Chorley and then the SOHO Theatre Presents Showcase. The first act was Penny Arcade, former Andy Warhol Factory star. She came out to talk at us; her husky New York voice gives the angry polemic in her pieces the right delivery, and at first she was amusing, angry and entertaining. This did not last long.

Penny started with an acapella song, a brave move in a quiet tent full of people. It was competent and in tune, and she got the audience to join in. The talk quickly became overbearing and, frankly, boring. She seemed determined to tell us how much she wanted to be in Britain (specifically which country, Penny?) when the world ended as we all “muck in” and that any revolution will start in Britain (country, again, presumably optional). My notes go thus: “Is she drunk? I hope so. Is she like Judy Garland? Will she survive the show?”. Penny Arcade did apologise that she had to go on for fifteen minutes to cover the slot but her performance did her no credit.

The Britain love continued with Penny telling us about the history of England and that here in England we don’t shoot people whilst they watch Batman in the cinemas. By this point my cider had run out, a fact I was painfully aware of. She ended by telling us we’ll be fishing in the Thames for eels again before long and I was left wondering if Penny had ever seen the Thames, and which part of Victorian England she wished to return to.

Then came a hirsute man with some kind of message to give us via the medium of cheap bread. He was called Paul Currie and I still don’t know what his act was. There were rubber ducks, a bit of sort-of magic and pulling audience members out to lift him up. I took a photo of a sad piece of bread to remember how the performance made me feel. My friend pointed out that he missed a ‘wholegrain/spelt’ Latitude joke. 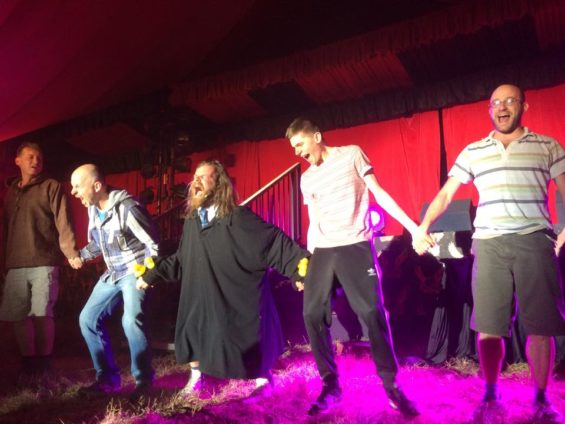 Paul Currie. Before the bread.

In fact, there were no jokes, or proper magic, or stories, just some running around and shouting a lot. It made me wonder what the criteria was for entry into the cabaret tent. Judging from Paul, it was being able to say “I have an act”. At this point I sent my friend off for the hipflask, feeling bad cabaret sadness engulf me in a hug of wasted Warburtons.

So, up next was Rhys Nicholson, Australian stand-up comedian. He was gay, which is perhaps why he was in the cabaret tent, not in the next-door comedy tent. Thankfully, he was very funny, he told us how he and his boyfriend were “trying for a dog”, and his usual hotel routine when alone (“check in, nude up and start stealing”). There followed a particularly graphic story of being in a hotel room watching porn, which engaged a lot of visual images but they were pertinent to the telling of the story, and supported the humour. Rhys was dressed smartly, spoke with wit and was a sharp cookie. Frankly, he had skill and this was a welcome relief at this point.

Then came back Penny Arcade. Ah, Penny, who wasn’t getting enough laughs so felt the need to walk amongst the crowd saying, “I must go deeper among you”. No really Penny, please stay where you are. Preferably behind the stage. At this point I see I wrote in my notes that she had said the words: “narcotic of the infantilised masses”. I’ll let you work that one out, as I’m buggered if I know what she meant. I think my brain was trying to work out if the lit-up heart onstage was from Bethnal Green’s Working Men’s Club, as every time I looked another lightbulb had blown.

Up next: Lou Sanders. All I can say about this woman was that she became so desperate for laughs she threw herself down the stairs by attempting to slide the bannister. I still am not sure if it was a cry for help. The woman sounded like a walking Buzzfeed article, with odd little noises coming out all the time. “I was in LA, woo, grr, awks! Bit of a winner! Yeah hello! Yes please! Argh! Totes!” It made me want to pull my ears off. It wasn’t funny, she was trying far too hard and she ended up getting angry at us, the audience, and threw herself down the stairs. It was a good move on her part; if she didn’t do it I had a feeling I was going to just to put her out of her misery.

And then arrives Twisted Loaf. Two women. Making odd noises. Making audience members get onstage and feel stupid. If there was an act here then they kept it a secret from me, or perhaps making noises and getting audience members to perform for you is so nuanced I missed the esoteric point.

Was there anything that could save my Friday night?

Thankfully, up next was Panti Bliss. I say ‘thankfully’, but I was very aware of being in a cabaret tent watching comedy. The show was billed as a “storytelling tour de force”, but it still felt as thought she could have been in the comedy tent next door. Again, I felt we had Panti because she was in drag. But anyway, she opened with the line “I’m so glamorous I’m practically disabled”. Tone, set and act. Panti told an anecdote about Madonna (Madonna’s default setting is, according to Bliss, “Jokey c*nt”) which was lengthy and didn’t really go anywhere, but then she went into what can only be described as a well-rehearsed, informative and volatile rant. She was adamant that she was not impersonating or parodying a woman, something she felt drag acts struggle with in terms of perception. This may have had something to do with the recent news of banned drag acts in Glasgow. She used audience members as a device, not as an excuse to ridicule or project her insecurities. She spoke opening of her twenty-year HIV battle and finished by reiterating that she was a “National f*cking treasure”. Who am I to argue?

Watch Panti in full flow in Ireland at the Abbey Theatre here.

Le Gateau Chocolat was an entirely different kettle of fish, and after Panti’s flawless delivery, I finally felt as though the night was warming up. There was a man in a beard in a dress. It finally felt like cabaret. Hallelujah, praise be. 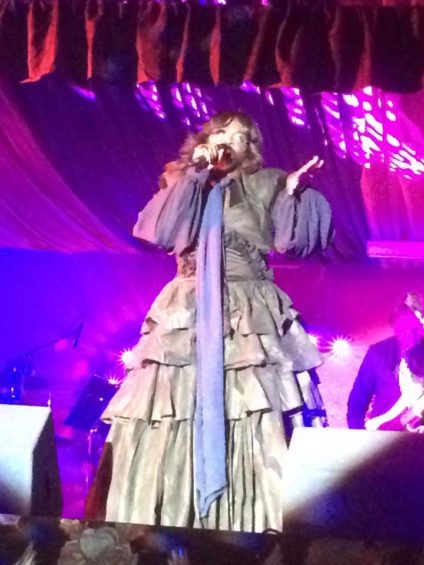 Le Gateau has a beautiful vibrato. Please excuse the very obvious metaphor here, but it felt like I was being fed warm, melty chocolate through my ears. He opened with the evocative World of Imagination from Charlie and the Chocolate Factory (Gene Wilder’s, obvs) which led to the South Park’s Chocolate Salty Balls. Which, being sung by a man in a dress and a beard, was infinitely better than watching a rubbish comedienne fall offstage. I felt at home, I felt I belonged. I felt I’d found the cabaret tent.

And then it went wrong.

Despite enough sass and confidence to knock a drag queen’s wig off from ten foot, and an ability to entertain that shone through that evening, the sound desk decided to pack up. It was so incredibly disappointing as the show really felt as though it had finally got started. Le Gateau Chocolate oozes a fantastic mixture of sensuality and power, and the voice! Oh that voice. He made sure the audience were enjoying the show despite the problems, getting us to help him sing when the sound cut out. The live band were valiant in their efforts to keep the show going and at the end they finished with a resounding version of Madonna’s Vogue and we were all encouraged to get up and vogue along. This was a set unfortunately plagued with technical difficulties, but that didn’t lose its chutzpah and enjoyment value. Le Gateau was worth waiting for.

And that was just Friday…