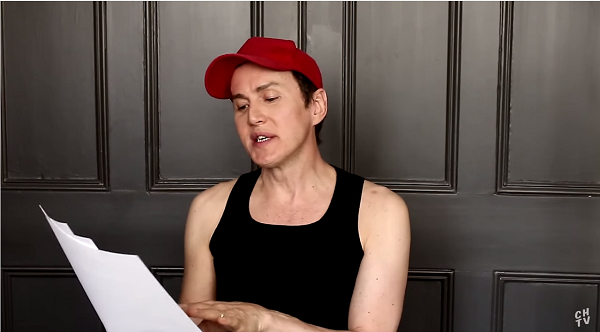 When the committee behind Glasgow Free Pride announced last week that there would be a blanket ban on drag performers, there wasn’t enough internet to go round for all the outrage that move generated. Putting the “cross” into cross-dressing, drag queens and kings north and south of the border fell over themselves up to heap the opprobrium on while supporters of Free Pride’s policy tried to make themselves heard.

[Update the drag ban has now been lifted. As you were.]

Here are some responses that cover the breadth and depth of feeling on both sides of the discussion. Buckle in.

Nominated for a London Cabaret Award for Best Newcomer in 2012 alongside a dashing young website (we both lost out to several metric tonnes of peripatetic canvas), YouTube star Charlie Hides is famed his uncanny accurate impersonations of Cher, Madonna, Kylie et al as well as his Sunday shows at the Royal Vauxhall Tavern.

Here is his “open letter” to the Free Pride organisers.

Last year, Dublin’s favourite queen went global, partly thanks to that speech. Writing on her official Facebook page, this is some of what she had to say today about Free Pride.

The claim is that drags make them “uncomfortable”, a claim that has been used to try and justify discrimination against every marginalised group since time immemorial – including trans people. (I’ll leave aside the bizarre “unsafe” claim). You realise that every year after Pride events, some gay will write a letter to the local LGBT rag complaining about the drag queens and the trans people in the parade. They don’t ike these “freaks” and are made uncomfortable by them. They don’t want them in the parade in case God forbid, someone might think that they too are a “freak”. And quite rightly, every year, we roll our eyes and tell them to cop on. The problem isn’t with the queens and the trans, but their own problem. They themselves are not yet confident in their own selves, their own sexuality. They aren’t ready for Pride, and rather than calling for queens and trans people to stay home, THEY should stay home till they are ready to accept everyone.

More (much, much more) of her statement can be read on Panti’s Facebook page entry.

No, Panti, tell us what you really think.

What a load of old bollix, from Glasgow. Ridiculous. https://t.co/8woJSSW8kO

I can't fit it in 140 characters but my opinion on the situation with Free Pride… pic.twitter.com/kYf0eCVcIb

Panti and Mary Mac were not the only ones to express their ire.

Oh FFS, get a life and stop being so fragile. Free Pride Drag Performance Policy Response http://t.co/bGxyFCwZYG via @wordpressdotcom

Sex columnist Dan Savage contributed to the debate via a post on The Stranger (emphasis Savage’s own):

The dingbats running Free Pride don’t seem to understand what pride parades and protests are about: demanding that the straight majority learn to tolerate our presence. “We’re here, we’re queer, get used to it.” But if we can’t get used to each other—if certain segments of the queer community can’t tolerate certain other segments of the queer community—what kind of a message does that send the straight majority?

The full text can be read here.

Scotland-based trans-dyke AB Silvera has described the uglier side of the backlash against Free Pride.

The ‘drag ban’ was wrong. I feel it completely ignored the history and present of the larger trans community, especially considering there is a strong class issue, with working class trans people and/or trans people of colour having much more of a connection in general to drag as a performance, identity, and community.

Now that you know I agree the ban is wrong, let me give you context. The organisation that did this wasn’t a big moneyed Pride organisation. This was done by Free Pride, a small group made up of LGBTQ people that wanted to organise a free, accessible and safer alternative to Glasgow Pride. Glasgow Pride charges for the post-parade party in the park, is massively commercialised and does not center the needs of the most marginalised in our communities. As such, many felt something else needed to happen.

Free Pride is small. Very small. This is its first year. It could be its last. Because when the ‘drag ban’ went viral, the entire mainstream gay community turned against them. And they didn’t do so with reasoned arguments like the one I outlined above about how I disagree with the ban. They did so with racist, transphobic, misogynist and ableist slurs, harassment and threats. Multiple threats. To Free Pride organisers, to their venues, etcetera.

The full text can be found on her blog post.

London-based trans-woman Billie Thompson expressed a feeling no doubt felt by others of her community.

Sort of pleased about this? It's mega awkward at Pride London when the Drag Queens/Kings walk near the trans groups https://t.co/PatmFEC1Ce

Free Pride’s decision has been extensively covered on social media and elsewhere but here’s our tuppence.

Free Pride’s argument that “some drag performance, particularly cis drag, hinges on the social view of gender and making it into a joke” perhaps shows a misunderstanding of one crucial aspect of many drag queens. Through humour, which often can be incredibly brutal (we’re looking at you, Myra), drag queens hold a mirror up to the world and express the cruelty and idiocies they find everywhere around us. Sure, they make fun of gender but they also make fun of everything, including (and, sometimes, especially) themselves and other queens. Asking them not to draw humour from all they experience is asking drag queens not to be drag queens.

Oh and dear Independent, dear Huffington Post, dear Metro and dear Pink News (who really should know better), please note that Free Pride’s move affects not just drag queens but drag kings just as much and, maybe, more. With many kings struggling to get gigs in mainstream events, banning them from a supposedly “inclusive” Pride does their professional prospects little good.