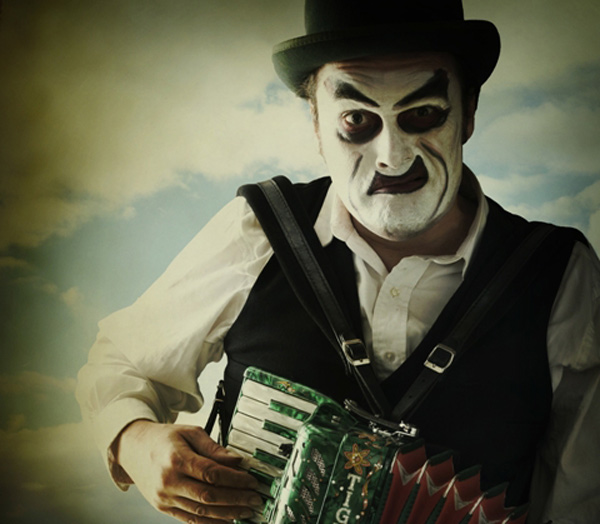 As the falsettoed singer of The Tiger Lillies, Martyn Jacques is one of cabaret’s darkest princes. He’s already spoken to us about his life living above a Soho brothel but, with The Tiger Lillies due to return to the London Wonderground next month, we thought it was about time for a catch-up.

I meet Martyn Jacques, front man of The Tiger Lillies, in a cafe in South London. His face is bare of his characteristic make-up and he wears a bowler hat over his long plait. He’s smart in a Soho Ringmaster style; suited but not quite booted.

Having seen The Tiger Lillies’ play their hits at the London Wonderground and their latest live show, The Rime Of The Ancient Mariner, I was ready to talk ancient poetry, personal Albatrosses and conceptual theatre. What I hadn’t expected was Jacques’ easy laugh, friendly conversation and Bunny Suicides…

The Rime Of The Ancient Mariner is very different from your standard live show. How did the collaboration with Mark Holthusen, visual director of Mariner, come about?

Mark is a photographer and he was very successful for a little while; he was one of the top ten commercial photographers in the world for about a year. He used to photograph – well, he still does – Adidas. Then he actually quite seriously contemplated suicide because he was taking photos of Adidas training shoes. He woke up one day and thought “is this my life?”

He decided to start taking photographs of weird bands and we were one of those bands. When we went to San Francisco, where Mark lives, he asked to take some photographs of us. I’d seen some of the other bands he had photographed and I liked them so much, I thought they were so imaginative. He used to take these photos and put things behind us. There’s one of us three all doing a pose with a “dead” girl in front of us and we’re all smiling and laughing. It was quite dark. He also shot a beautiful one of us on a winding road and I liked it so much and could see his visual imagination. He had made a video for us (Living Hell) and I had just written a song for Ancient Mariner so I said why don’t we make a whole visual world for it? He’s brilliant. He’d never done anything like that before and it’s really amazing.

You saved him from corporate hell then?

Yes! You know, I think it’s interesting, if someone is good at one thing there’s no reason why they couldn’t become really good at something near to that, something else. It’s been amazing for him, he’s very happy. He’s still making money from taking photos of Adidas trainers but he’s not so successful now because they want you to be there all the time for them and he won’t do that. He’s happier because he’s doing some art now; he’s very grateful to be in this world, saved from Adidas trainers.

I understand that the Lillies and Bourgeois and Maurice have all the same management. Have you seen them?

Oh they’re very good. They sing about all sorts, even about rape. I once did an album sort of about rape. Do you know the film Pandora’s Box with Louise Brooks? The story is very dark, actually it’s going to be our next show. Mark is going to do the visuals again. 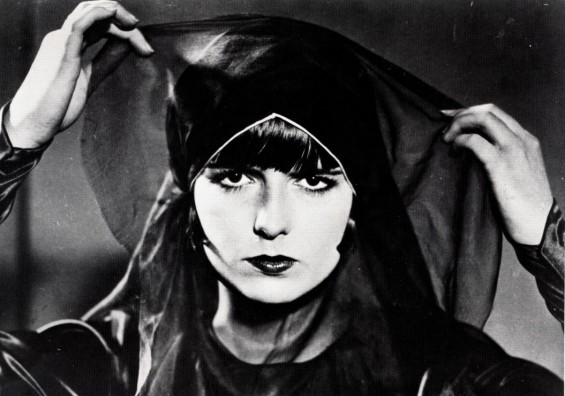 I thought that the visuals Mark created for Ancient Mariner are quite like Terry Gilliam in style. Do you see that in the work he has created for you?

Funnily enough, Terry was a big fan of Shockheaded Peter. The Tiger Lillies were going to do a show with him at the Roundhouse, based on Edward Gorey. Do you know of him? [I shake my head.] It’s awful! I’m sitting here talking to you about people who you should just know! But you don’t and it’s horrendous. The world’s all wrong. I can try a little bit to make sure everyone knows about them but it’s terrible.

Well, Edward Gorey was an American writer, very strange and eccentric. He used to wear a big fur coat and a big long beard. He wore so many bracelets and rings he used to make a noise when he walked and he used to spend every day at the New York ballet. He used to write these wonderful little books that he published himself. Really funny little drawings, very clever.

Did you ever get to meet Edward Gorey?

I was going to do a theatre show with him but he died two days before I was going to fly out. I’d recorded the album anyway, and I had planned it with Terry Gilliam. People often said that Shockheaded Peter was very Gilliam-ish with the puppets, much like they used in Monty Python. Yeah, in some way I come from that universe. People have said that The Tiger Lillies’ more comedic songs have a Python quality about them. Python is a bit more public schoolboy; good, very good, but I like to think we’re a bit darker.

Anyway, in the end Gorey became quite famous. You know it’s funny. I put this post up on the Tiger’s Facebook yesterday and this conversation is exactly what this post was about. [Martyn shows me an image on his phone that says “Stop Making Stupid People Famous”.]

There’s all these people doing wonderful things and [he sighs] there’s no fucking room for them because it’s all about people who don’t do anything. It’s terrible. Terrible, terrible.

I heard an author on Desert Island Discs recently who said that 90% of schoolchildren asked said that they want to be famous. That’s it, just famous, nothing more.

It’s nice to be venerated but for doing something. At least that way people are looking at what you’ve done rather than looking at you.

So how do you see your fame alongside your work?

That Shockheaded Peter show was probably the most commercial thing we ever did. The directors were careful to keep an eye on what was acceptable. In the original children’s book, Der Struwwelpeter, there is a whole story about the Inky Boy, a boy who falls into a pot of ink and turns black then the other children pick on him. The directors thought this would cause a lot of controversy with a certain type of people – not unlike doing the Facebook page I realise. I put up an image recently, a really clever image, of a bowler hat with a Hitler moustache and haircut and it said “one made millions laugh and the other made millions cry”. Outrage! Absolute outrage! People were writing, complaining. There’s a whole group of people out there who seem to lack any sense of irony.

So the directors were clever. They knew the Inky Boy story would cause that kind of controversy. It turned out really well because we changed it from Inky Boy to Bully Boy and it was one of the most successful songs in it, it really worked. But that’s the problem, I think as soon as you do anything where it touches on certain subjects you get punished for it. And it’s sad that these people…that you can’t use irony.

I do think people love to be outraged – but surely that’s something you quite enjoy evoking in people? You put a review of Ancient Mariner up on Facebook where the man watching had hated the show. Do you not enjoy reading something like that where the audience member says “I hated it, I’m so outraged”?

I don’t know really, I just get…part of me does like it but then part of me just gets fed up sometimes. I just get fed up with the whole…the stupidity of people. Sometimes it’s funny and I love it when you get these very clever people like Woody Allen or Mel Brooks who turn it around and take the piss out of people that are stupid. So I try to laugh about it but sometimes I don’t laugh and just get really, really depressed about it. We’re drowning in a sea of stupidity. There are so many people that are dumb and it’s quite depressing, isn’t it?

I suppose that’s what you were saying about the internet: everyone suddenly is allowed a voice and there’s only so long I can sit on Twitter without wanting to throw myself off a cliff.

I’ve done quite a lot of suicide drawings. I did a whole series of pictures of me killing myself in different ways. [I ask him if he’s ever seen the Bunny Suicide books]. Yes! Yes they’re brilliant.

Did you get quite inventive, jumping into toasters or anything like that?

No, I was just hanging myself. But I might look into that. They’re very funny though. I was in a bookshop yesterday and a friend bought four Bunny Suicide books. She needed them for inspiration apparently.

Four seems quite excessive. What did you do with your pictures?

Are they any good? Would you put them on your wall? I like the idea of someone coming for tea and noticing a picture of you hanging on the wall.

No, I wouldn’t put them on the wall. I put them on Facebook and people seemed to quite like them.

So is it just you that does the social media?

I do the Facebook, but there are other people too. I put things up and we all have a voice; you’re right, you do get more and more in touch with people over the internet. So then you actually start to see and understand more clearly the ways people’s minds are. Maybe there should be a new state created for the disillusioned people who are horrified by the stupidity of others. But then it would be difficult to judge who is allowed in. Maybe we should give them Bunny Suicide books? That’ll be one of the tests – if you find them funny you’re in.

Talking of irony, how do The Tiger Lillies go down in America?

Yeah, they’re very good the Americans. They will put us into nice little art centres and weird little arty places. We go there at Hallowe’en quite a lot. We’re marketed as that kind of band and they all wear make-up and dress up in Hallowe’en costumes. They did a documentary on us that was aired in America that got us a weird art following. They’re the ones that seem to get irony. We tend to get younger audiences in Russia or Europe – they stand instead of sit and tend to shout and dance. I like playing there, they’re fun. We played a Brecht festival in Berlin and Wagner once. I think the band has quite a strong German feel so we get invited to those types of events a lot.

And finally, do you think you’ll be doing much more solo work?

On the whole I’m not that interested in doing solo stuff. I only did Dr Caligari because I did it at the Soho Theatre and it was a small space. I barely made any money from it. It’s weird to do something on my own but even then I did that one with Adrian [Stout, The Tiger Lillies’ bass player]. We’ve had a very good career. I like to think I’m half-way through now.

Water, water everywhere: what did we think of the Tiger Lillies’ tale on the Rime of The Ancient Mariner Show.

Or their version of Hamlet?