Review: The Tiger Lillies’ The Rime Of The Ancient Mariner 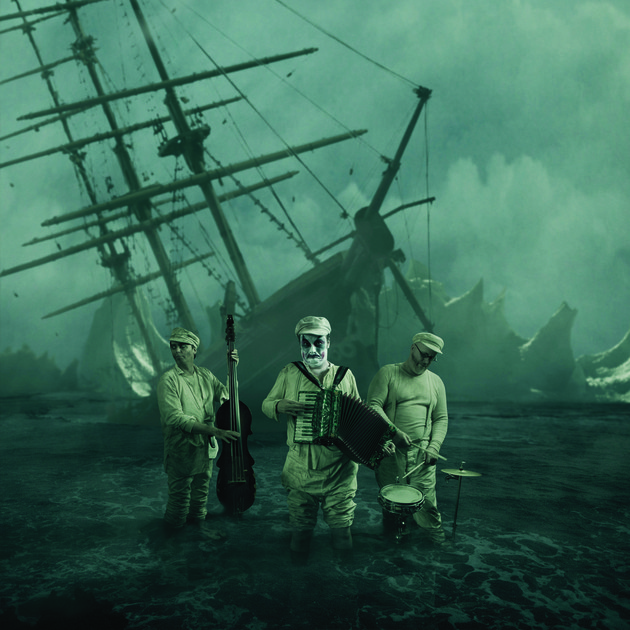 The operatic, gypsy, folk, punk-rock cabaret trio, The Tiger Lillies, return to London with a sold-out 90 minute musical adaptation of The Rime of The Ancient Mariner.

The Tiger Lillies are no strangers to the theatre. Having previously created their own version of Hamlet and staged their award-winning, international cult musical theatre production, Shockheaded Peter, they are a band that have proved their ability to mix and recreate a wide range of genres and styles. 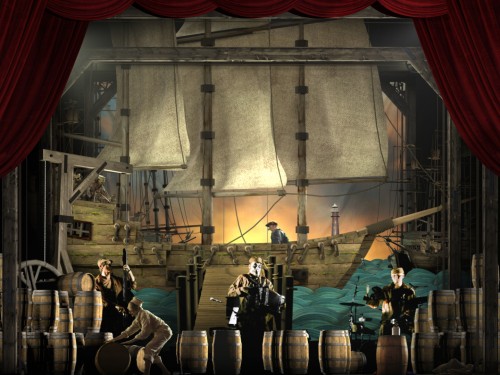 The Rime of The Ancient Mariner.

Now their musical adaptation of the longest major poem, English poet Samuel Taylor Coleridge’s The Rime of The Ancient Mariner, has made its way to London. The band have collaborated with American visual artist Mark Holthusen to create a show that lingers between a Terry Gilliam-esque baroque film and a music concert. It’s a combination that works very well.

The poem tells the story of a sailor recounting a tale to guests at a wedding. He tells how he, one stormy day, shoots an albatross that he believes has brought the ship and crew bad fortune. The crew are incensed that the Mariner has killed the bird and force him to wear the albatross around his neck as punishment. The show takes us on the Mariner’s journey through calm, sunny seas to icescapes, smoke-breathing monsters, snowstorms and down to the very depths of fiery hell. 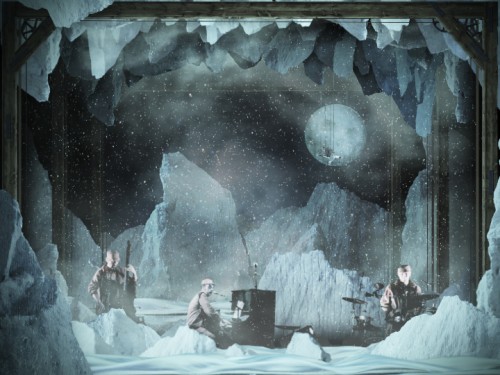 The icescapes of The Rime of The Ancient Mariner.

Recording for The Rime of The Ancient Mariner commenced in 2008 and lasted for three years. The South Bank Centre’s Queen Elizabeth Hall is a fantastic venue for its London debut. The traditional proscenium arch and sloping audience seats fit the shape and scale of the show perfectly. The band appear behind a screen that covers the whole stage and another screen is hung behind them. Both screens are used to create a multi-layered, 3D effect using images and video projected throughout. Holthusen has created remarkable images from drawings, fabrics, metal objects and videos of real people performing as the captain and crew. These actors all wear masks, a common theme in The Tiger Lillies’ work.

The screens are an engaging and innovative way to tell the story. The tale is communicated effectively through the use of the music and lyrics but the way that Jacques uses his voice, creating rasping, throaty noises or eerie, high-pitched wailing, can occasionally obscure words and phrases. The addition of these, frankly glorious, visual effects adds an extra element to the storytelling.

Beginning with the lewd crew drinking from barrels and generally making merry, the narrative moves through smutty retainer rogering with Cabin Boy, the demise of the crew in Death Ship 1 & 2 and the eventual freedom of the Mariner from the albatross in Dead Men’s Ship. Each song tells a little more of the story, interspersed with lead singer Martyn Jacques quoting parts of the poem. The performance finishes with a planned encore of Living Hell which has the backdrop, rather incongruously, of a disco ball. The song was brilliant and apt but the disco ball was out of place and confusing.

As ever, the Tiger Lillies are comprised of Jacques on accordion and heartbreakingly poignant piano duty, Adrian Stout playing double bass, musical saw and theremin and Mike Pickering on drums and expertly used percussion. Knife sharpening, handfuls of empty nut shells and hand-clapping are a few of the atmospheric additions from Pickering that add the final touches to this haunting piece of musical theatre.

Lewd, intelligent, bawdy, thoughtful, immersive and creepy as ever, the Tiger Lilies have once again proved why they are so important to the contemporary performing arts scene and why cabaret most certainly needs these nudges out of the norm and over the edge of decency. See a live clip of the show here.