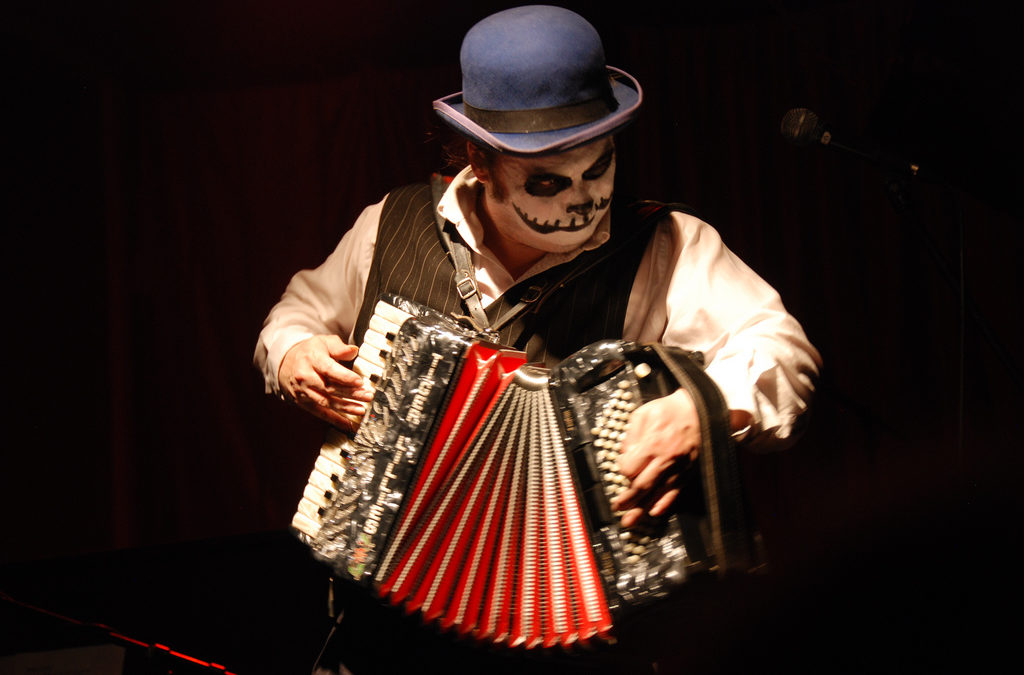 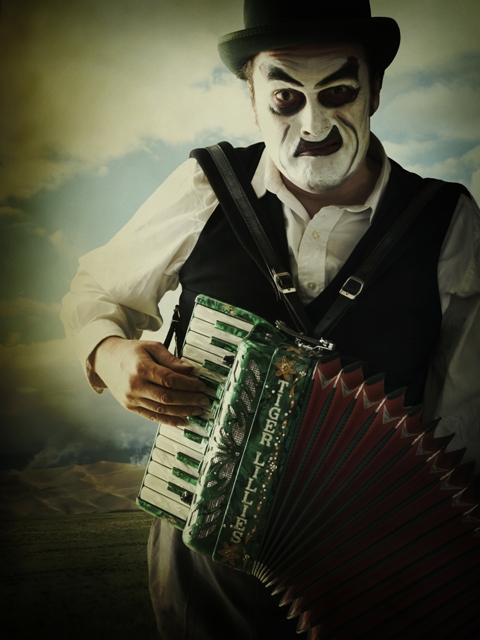 Its not unusual for members of a group to temporarily fly the nest and experience performing on their own and that’s exactly what Martyn Jacques from The Tiger Lillies has done.  In his current show at the Soho Theatre, he scores the silent movie The Cabinet of Dr. Caligari live. Kerry Fitzgerald interviewed him about music, being alone on stage and where he imagined his future to be when he was living above a brothel in Soho.

It is your first solo show and I was wondering where do you think the audience’s focus should be?

On the film. Definitely. I look at the audience sometimes and they’re all looking at the film, which is what they should be doing. It’s a great film, they can watch that, I’ll have their ears an­d the film can have the rest. I actually wanted to be in complete darkness. When I did it in Warsaw, I did it in darkness and they said I should have a little bit of light on me. I think that the more light is on me the more it takes away from the film.

There are lots of references to Tiger Lillies numbers. Was that on purpose?

Yes! It was funny writing a long ongoing piece of music. I wanted to make it more fragmented and bring in quotes from Tiger Lillies songs. It is set in a fairground and I’ve written so many songs about freakshows and fairgrounds that I thought it’d be a good fit. I’ve also written a lot of songs about murder and I thought it would be a good idea to bring some of that in.

You switch so fluidly and discreetly between piano and accordion and for most of the show play both at once. Did you consider also playing a ukulele?

No, I think that’d be a bit much really. I did at one point think about having a bass drum but I didn’t in the end. Instead I tap my foot.

After the show yesterday you were selling CDs and called out “you buy them, we’ll sign them. Oops, I’ll sign them: it is an ‘I’, not a ‘we’.” Do you miss the rest of The Tiger Lillies?

No, its fine! Its funny for me, I quite like it, it was the second time that I’ve ever appeared on stage alone.  It is nice to know that I am going to be carrying on with The Tiger Lillies after this, but its quite fun to do a solo project. I’ve got a friend who works in cinemas that is going to organise a tour of old European cinemas for me. I like the whole thing. It is a nice side project.

Essentially you’re still sharing the stage. Do you think you’ll do another solo show where the focus is solely on you?

Maybe. I like working with other people so this is almost similar to that in a way as I’m still looking at and interacting with something else. I have performed with other people a lot; I quite like playing off of them and their reactions.  I’m quite happy to be the centre of attention but I don’t have to be.

So you may go on and do more solo stuff…

Maybe, I haven’t really thought about it. It is good to do different things, that’s what you’ve got to do. Try out different things and change. I may even do a recording of this show and perhaps a DVD.

I recently watched the original 1920s silent film and was immediately struck by the fact that your score evoked so much more emotion in me. You made me care more about the characters, especially Dr Caligari, the villain. Was that a conscious choice?

No. I think I am quite nice towards [Dr Caligari’s associate] Cesare, I’m projecting him as more of the victim and Dr Caligari as the evil one. I write about murderers and dark and deviant kinds of people so maybe I feel slightly sympathetic towards Dr Caligari and maybe I feel like I could be quite a good Dr Caligari.

You spent several years living above a brothel in Soho . Do you think that has influenced the dark side to your music?

I would say so. I’d watch everything from my window and see all the stuff and it was quite heavy. The Salvation Army would come often down here and play and that was marvellous. I’ve written lots of songs about them.

There were girls who worked in the street called “clippers”. Their job was to say to interested customers ‘give me fifty quid and I’ll give you a key, just go up that staircase, go in and wait for the girl’. They would just be old keys and they wouldn’t fit and, before the victim came downstairs, the clippers would move on to another corner.

Unfortunately when you do something like that, you can always do someone who gets really angry and one of the girls I knew was murdered.

Did you ever imagine you’d be here when you were in that world?

I always hoped I’d be a successful musician and not like a drug dealer or a pimp for the rest of my life. Unlike most people I always used to play and I was always writing songs about that world and the life. So, yes I guess I did.

After your shows at the Soho Theatre, you’ll be joining up with the Tiger Lillies again in September to perform Hamlet at The Southbank Centre. What can you tell us about that show?

I think its quite good, people think its really good. I’ve done some bad shows but this one has quite high production values, we’ve had lots of rehearsal times and it’s very fresh. I’ve done a few shows where they were criticised and they failed because production values were too low and there wasn’t enough time or money. This one is much better, we’ve rehearsed it a lot and we’ve played it. I think it’s a good one.

What’s your worst show that you’ve ever done?

I have done a few. I did one in Edinburgh, not The Seven Deadly Sins, one called Punch And Judy. The production was terrible, we didn’t have enough money and we didn’t have a producer. We made it on our own, got very badly mauled by the critics because it was so badly put together. There was bad lighting, a terrible set and it was badly conceived.

We also did a show where I was in a big dress and my costume, which had been nicely pinned to me, started popping open as I was dancing. I thought “fuck it, keep dancing” and ended up in my boxers.

That’s not so bad: you were naked on the front of Farmyard Filth

with an inflatable sheep!

Wow. You like Farmyard Filth? Well, yes, I suppose I was naked. I was drunk.

You’re quite self-critical it seems.

I’m getting  a bit old now, I’m not quite so driven as I used to be. I think its good to be a bit more relaxed and laid back and I haven’t been relaxed or laid back, I’ve been too mad. So hopefully in my twilight years I’ll relax a bit more and take things less seriously, I’ve taken things too seriously. That’s been my mistake. A lot of people do that, every time people get upset about things  I think “what’s the point?”