Fings From The Fringe 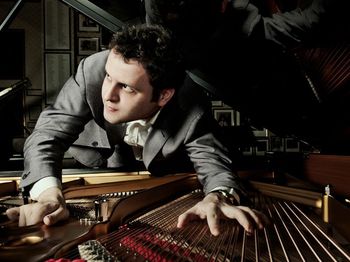 Well, who doesn’t love an alliterative title? And titles, when it comes to Edinburgh Fringe, can make or break you. Likewise your publicity image. Does it draw people in? What kind of people? And does it accurately represent what you do? Some of the biggest disappointments aren’t because a show is bad, but because it’s not what it promised.

Musical numbers are interspersed with biographical detail from Lehrer’s life and a few choice props are flung about. Like the stuffed pigeon sitting sedately atop the glossy black piano, Kay barely moves from his stool; he has no need because it’s the material – including previously unreleased compositions – that’s the star of this show, within Kay’s expertly constructed frame and presentation. The timbre of Kay’s voice may be a little thin when not ripping into the gleeful madness of growls and squeaks that compliments the smooth sociopathic straightness of his speaking voice so well but, when the verbal material is as rich this, that is a negligible note. He teases us with more variations of ‘The Elements’ than I knew existed, and favourites like ‘The Masochism Tango’ are given a 21st Century twist, proving Kay’s own skills as much as his muse’s.

This is one of the themes that arises in the first of Ben Walters‘ Cabaret Chinwag events, now a firm favourite in my Fringe fixtures. Each week he hosts a free (yes, FREE) panel show discussion with some of the most interesting performers from the Ed Fringe cabaret circuit. It’s a brilliant place to familiarise yourself with who’s doing what, and what shows are hot. And it’s been sponsored by Pickering’s Gin, so yes, there are freebies. 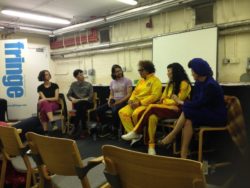 Today, guests are Lili La Scala, George and Liv of Bourgeois & Maurice, and Lisa and Kim from the Australian sensation Hot Brown Honey that’s hitting the UK for the first time under the production umbrella of Briefs, while presenting something wholly original. As well as info about their shows and careers, the guests are all prompted to give a little lo-fi taste of their work. ‘If You Don’t Know What To Do With Your Life‘, from Bourgeois & Maurice’s first album becomes a poetry duet; Kim (a.k.a. Busty Beats) from the Hot Brown Honey team raps us their welcome to the hive; Lili La Scala melts the stresses of the Fringe away with her exquisite voice, singing unaccompanied the traditional Scottish ‘Mingulay Boat Song‘ from her show Siren.

There’s mingling time afterwards, to sample more of the Pickering’s Gin offerings if you so desire. Another thread of the panel chat today though, is the function and dangers of alcohol as a prominent presence in the cabaret culture. Sober thoughts on a valuable resource. Just careful not to overdo it, for everyone’s sake.

How to Save the World Without Really Trying. By Bourgeois & Maurice. Underbelly, 66 Cowgate, EH1 1JX. Until 28 August, 21:25 https://tickets.edfringe.com/whats-on/bourgeois-maurice-how-to-save-the-world-without-really-trying