5 Bourgeois & Maurice Videos To See Before You Die 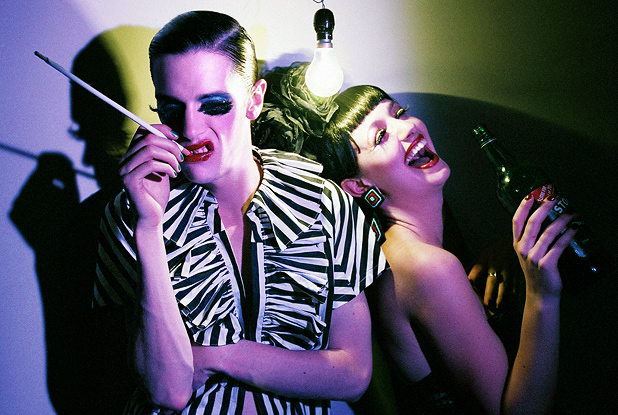 Visually, musically and artistically, there is no-one out there quite like neo-cabaret siblings Bourgeois & Maurice. After a successful online campaign, their new album The Third is out this week.

The louche pairing of Maurice Maurice and George Bourgeois shouldn’t work but does. Maurice is the beehived multi-instrumentalist, laconic as a post-coital Noël Coward, while her brother is a thousand-volt livewire vocalist who cavorts in a series of eye-popping designer outfits. Together, they perform sharp-witted and twisted pop songs with topics as far ranging as drugs, taxation and fashion.

As the selection below shows, the videos for those songs are as highly varied as the subject matter.

One of their earliest numbers, the song has been recorded on the pair’s latest album. Don’t be fooled by the twee intro: the pitch-black lyrics and furious melody will stay in your head until you call the bailiffs in.

It was this very song that led the eclectic pair to victory in 2011’s inaugural Alternative Eurovision. It is easy to see why: the cynical jabs at fashion victims and throwaway Francophile references are amusing in their own right but the musical composition and animated style of the video lift the song onto another plane altogether. Even better, the accompanying documentary is just as funny.

Any cases of mass vomiting during the Christmas period of 2011 were just as likely down to that year’s nauseating John Lewis ad as any seasonal bug. This “homage” doesn’t just take the piss, it hooks up an industrial-size dialysis machine and pumps like crazy.

Sticking two fingers up to the traditional audience of London’s mecca of dance, Bourgeois & Maurice’s We Can’t Dance shows at Saddler’s Wells were a daring experiment in a venue not renowned for that kind of thing. There were three cheeky teasers as well as three longer trailer videos which saw the duo taking lessons from David Hoyle, the BalletBoyz and, as you can see below, hiphopster Lil’ Tim.

Beyond the clever videos, the outrageous outfits, the biting satire and the witty asides, it cannot be ignored that Bourgeois & Maurice are two excellent songwriters in their own right. This haunting torch song is a superb taster from their first album Musical Couture.