Empress Stah: “I Am Terrified Of Spiders And Seaweed” 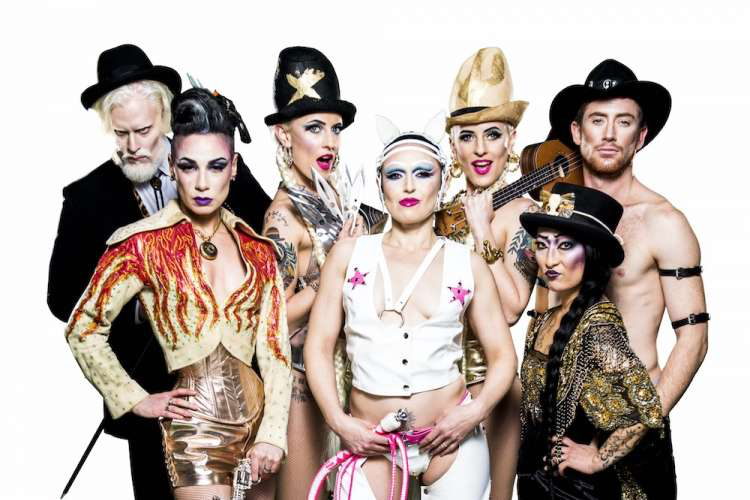 Very few performers have pushed the boundaries of cabaret like Empress Stah (above, centre). She started out strutting her stuff as a drag queen in Sydney clubs and has progressed to incorporating burlesque and circus into her increasingly inventive acts which have been seen in spaces as diverse as Soho Theatre and Torture Garden.

Her grounded personality belies her lofty ambitions: ultimately, she wants to create a performance in outer space. Audiences have seen her syringe her own blood to pour in a cocktail, pull glitterballs from her vagina and creating the world’s first laser buttplug.

For her latest trick, she has produced a new show for the London Wonderground’s upcoming season. The Raunch is a cowboy-themed affair featuring Stah alongside some of cabaret’s superstars like drag king-cum-aerialist Fancy Chance, cyr wheel specialist Jo Moss and Berlin-based sword swallower Jewels Good. Ahead of its launch on 5 May, we had a natter about what people could expect.

Where did the original concept for The Raunch come from? Was it something you have been mulling for a while or did it come through a lightbulb moment?

The Raunch was initially conceived as a show for the Ibiza Rocks Bar in Ibiza. I headlined Ibiza Rocks House at Pacha during the 2014 season and, as this was drawing to a close, I was chatting with Dawn Hindle and she asked me if I would be interested in creating a cabaret show for them, for the following year. It never came to pass, but the venue in question is on the west coast of Ibiza, so as I was considering the show it became apparent that it could have a western flavour to it, and when I asked my husband Graham what we should call it, he said “The Raunch”.We pitched the show to Underbelly and they loved it, and so it has been developed now specifically for the Spiegeltent at The London Wonderground.

You sound excited about this show. Why’s that?

I have self-produced cabaret shows of this scale in the past, including Moonshine, The Very Best of Empress Stah & Ice Palace of Malice, however this one is completely different as everyone is creating new material and developing new skills, whilst the Underbelly Production team keep things moving in the background. It’s the biggest budget I’ve worked with but it’s still never enough!

Fear isn’t an emotion we would readily attribute to you considering how you push yourself both physically and when dreaming up new routines but is there anything that scares you?

I am terrified of spiders and seaweed; this might partially explain why I am so interested to go into space, because there is nothing there. Also, I would never go diving in the sea for art or anything else.

I don’t worry about things in general because I have a firm belief that everything will be alright on the night, and it usually is. Sometimes I might wake up a 5am and lay there worrying about the show I am creating, the new skills I am learning, getting it ready on time, my team getting their elements ready on time, my cast learning all their new skills on time, boring anxiety stuff like that.

This morning I woke up from a dream just as I was about to be executed via a lethal injection so maybe there is some underlying fear! I strive to do the best I can, and some people will love it and others will hate it, you can’t please everyone, but I hope that The Raunch is a show that people will love and come back to see with with their friends, and that the reviewers don’t say mean things about it, or me. (No promises! – FM)

You’re one of cabaret’s innovators who is constantly crossing art forms from drag to burlesque to circus. What gives you the impetus to create new works rather than, as some do, just live off old routines? Do you ever worry about repeating yourself?

I really love the creative challenge of making a new show, thinking through the ideas, imagining new props and costumes and finding the music to develop a story within it, especially the eureka moment when it all comes together and you realise what the twist is, what the punchline will be. This process is very exciting for me.

I have been performing cabaret and circus acts for 20 years now and whilst I continue to create new routines, I have certainly had some favourites that have been performed worldwide for over a decade. It is good to be able to perform shows that are run in over time, you find new moments in them with different audiences, and you get to hone the act. Evolution is key though, and with that in mind I archived my entire body of work at the beginning of this year, it is important to keep things fresh and interesting, for yourself and for your public.

Who are your creative influences? How have they changed over time?

I always find this question difficult to answer, because I am not sure what they are. I grew up in a small town in Australia in the 1980s with only Smash Hits Magazine and the Top 40 for cultural influences.

Mostly the tricks and stunts and props I have conceived over the years have been inspired from my wayward youth, real life stripping, partying and dressing up. I place the utmost importance on originality, and will reject something that has already been done, rather than look for inspiration from the work of others.

I don’t scour the internet for ideas, I think and I write and I think about it some more, I might google a philosophical notion, or fact check a thought or search for music online, but I tend to be very insular. That said, I grew up loving Madonna and my mission to make a performance in Outer Space has really given me a strong thread for one whole strand of my work.

As someone who has been there and bought the T-shirt, what message would you have for new variety artists?

I always strongly emphasise the importance of creating unique stage characters and developing original content for your acts. Equally important is to have high production values, by this I mean you should invest in your costumes and props and make sure you clean them and repair them, remember the old adage, you have to spend money to make money. You need to be quality to get the best gigs, and always stick to your price. Leave your ego at home, no body likes a dressing room diva, and be friendly and respectful to everyone at your shows from the director to the lighting person to the glass collector. Feast or famine is the name of the game, so expect to have cash flow dramas, and learn how to juggle interest free credit card ransfers. The cabaret beast is not an easy ride, but it sure beats working for the man.

What plans do you have for The Raunch? Will it be going up to the Fringe?

The plan is for the show to tour worldwide, hopefully for a couple years. We open with a 6 week run at the London Wonderground then go north for a week to perform near Leeds as part of the new Yorkshire Festival, who originally commissioned the show (thank you Roz Coleman!).  We have not confirmed a plan to go to Edinburgh this year, but it is a strong possibility seeing as Underbelly are producing The Raunch. I think they’re waiting to see if it’s going to be as good as I keep telling them it is before they commit! Then down under for the Perth and Adelaide Fringe festivals and a run at the Sydney Opera House would put the icing on the cake.

The Raunch opens its saloon doors on 5 May 2016. Tickets are from £11 and include a complimentary brochure. More information can be found on the London Wonderground website.