What Does A Bona Fide Drag Queen Think Of Kinky Boots? 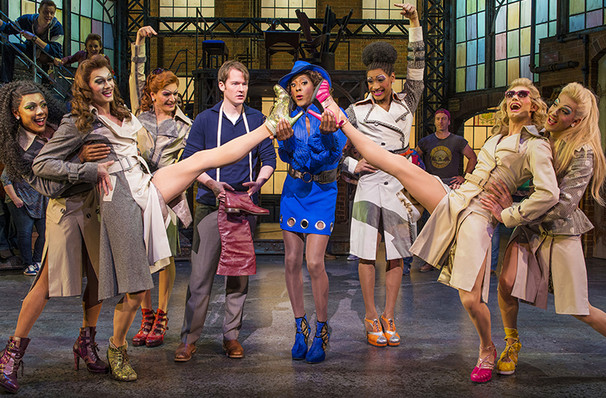 By now you will have read what some of London’s finest theatre critics think of the musical Kinky Boots which opened this month. Inspired by a true story. the plot revolves around Charlie, the owner of a failing Northampton shoe factory who, while on a visit to London, happens upon drag queen Lola. The pair then team up and create high-heeled boots suitable to be worn by men. Homophobia is confronted, life lessons are learned, Charlie and his younger female employee fall in love (we don’t judge) and the cross dressers all get new spangly footwear. Hurrah.

What, though, did a bona fide drag queen make of all this? Michael Twaits is a host and compere who has also won awards for his one-man show The Libertine Has Left The Building. We put him front and centre on press night and this is what he had to say about Kinky Boots.

Kinky Boots is the latest in a long line of film to musical conversions to hit the West End. The production has been a hit in the US where it has won Tony Awards for Cyndi Lauper’s winning score as well as Best Musical. It comes with a cast covered in sequins which makes for an easy on the eye, hum along, straightforward outing. Lauper’s music and lyrics have a few great moments and, despite a lacklustre start, the production has some variety and a couple of standout performances. Sadly it never becomes anything more than middle of the road despite the “outrageous” lead character Lola and big musical set pieces.

The story tells of a family run factory in Northampton that is on it’s last legs making gentleman’s shoes. The twist comes when Charlie Price, the begrudging, bequeathed factory owner meets drag queen Lola in London. He decides to move the business forward into the niche market of making ladies shoes for men who dress as ladies. “Hilarity” ensues and the factory staff and management realise they have more in common with a drag queen than they would have thought.

As a regular theatergoer, and occasional reviewer, I could write pages about quite how mainstream the production is. Killian Donnelly is a star performer who does too good at portraying the beige Charlie Price and ends up just being a bit boring. The factory workers ensemble look like they didn’t bother getting changed after Made In Dagenham closed and just waited for this show to open. The whole production feels like a very safe musical format feels all too familiar. Having said that, I have never in my life encountered a performer like Lola.

The drag world Lola works in is simply a straight writer’s fiction and is at odds with any form of reality. Lola’s a working London drag queen, apparently performing in the gutter of London but with a dressing room larger than Madame Jojo’s (RIP). The money no object/spit and sawdust club provides her with six “angels’ who are her backing dancers and friends. Their presumed dramatic role is to bring a much needed injection of colour into the drab factory life as portrayed on stage.

Lola has a flare for the dramatic and doesn’t just wear her drag at work, it is who she is. She seems to live her as persona and finds it hard to wear men’s clothes. As a production they try to brush over the tricky world of gender/identity politics explaining the difference between a drag queen and transvestite. They steer away from mentioning anyone being transgendered but there a few jokes in there I’m sure some of the queer community would find offensive – especially coming from a drag queen!

However, Matt Henry as Lola does a cracking job of delivering a family friendly, safe version of a drag queen. He uses all the expected poise, gesture flounce and camp a straight audience would expect to see and does a very good job of it despite the script and book not really allowing him to be a fully rounded character. Every song he sings is a standout feature of the show but when he’s offstage there is a definite slump in energy and the generic scripting of the character really holds the show back from ever being anything other than bland. Lola’s costume and make up don’t help either as they desexualise and age Lola a lot.

Perhaps the producers felt that for a show to be commercially successful and feature a drag lead, the character shouldn’t explore their own sexuality or be allowed to be viewed anything other than a clown. In one of the better numbers, Lola and the angels design a new range of sexy drag shoes whilst Lola wears a Joan Collins-inspired dress, evidently made out of a shower curtain. The result is awkward as she is being called a designer and style icon but looking like an extra from a Jilly Cooper novel.

Lola isn’t alone in failing to bring authentic drag to the stage. Her “Angels” consist of six well trained musical theatre actors. There are the three who could clearly dance better and then there are the three who have better pipes. They flank Lola throughout and beef up the ensemble numbers. Sadly beefing it up is exactly what they did – there was no real craft to the drag that ever made it convincing. They were men in costumes generally looking a little awkward despite making enthusiastic whoops and cheers.

It makes sense for a musical theatre show to use musical theatre performers but as they only ever appeared as drag queens, had barely any dialogue and were all struggling to tuck, pluck and keep it feminine – why not use actual experienced drag queens? Miss Cairo, Ruby Wednesday, Lolo Brow, Cosmic, Topsie Redfern and I could have had a riot up there and shown the variety that the actual drag scene has. We would also have given the show what it was drastically missing: an injection of life.

As the Angels dance and sing about the “sex” of a shoe being in the heel, two main things came to mind. One was that only Lola seemed to be wearing an actual stiletto, the rest had chunky heels or, at least, not a shoe that a queen would call a heel. Or sexy. The second was that one of the Angels was having some serious trouble with her lace front.

Previous X Factor Winner Marcus Collins actually steals the drag show amongst the Angels as he twerks and flirts his way throughout every number. He was the only one who brought an element of character and variety to his act. Too often the queens were doing a routine and it felt like they were playing by the rules; Collins has an air of fun and sass but sadly he isn’t featured enough to really bring much to the show aside from an amazing wig at the top of act two.

I understand Kinky Boots is a period piece so perhaps I should be more forgiving to the fixed format and risk free choices. I’ve no doubt the show will run and run. It is a solid production that it is guaranteed to be hen party fodder and I’m sure they will all think it’s “outrageous”. Sadly, though, it’s almost offensively safe and feels, more importantly, like a huge opportunity was missed to make something theatrically exciting and bring some real drag to a mainstream audience.