Video: A Peak Inside The New Look Hoxton Hall 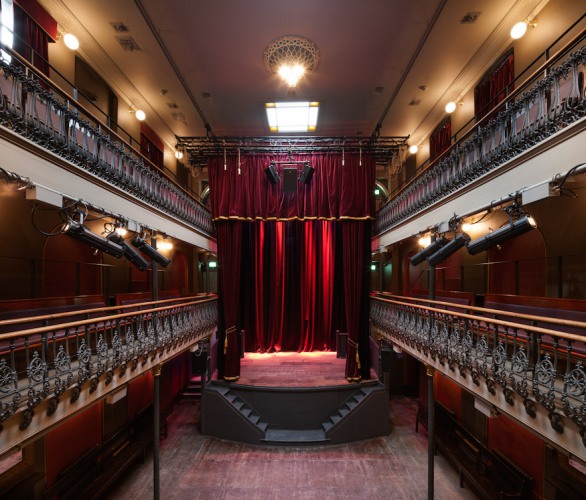 After a £2 million National Lottery-funded restoration project, East London’s historic Hoxton Hall is due to open later this year with “contemporary variety” being its stated mantra.

The Grade II* listed Hoxton Hall is one of Britain’s few surviving music halls alongside neighbouring vaudeville joint Wilton’s which is also looking forward to a new lease of life after undergoing it’s own facelift. The purpose-built building’s roots date back to 1863 but was only fully active as a Victorian music hall for a few years; in 1871, proprietor James McDonald lost his performance licence after complaints from the police (plus ça change…). Despite spending much of its life as a Quaker meeting house, it remained for many years still largely in its original McDonald-era form. Perhaps as a mark of respect, Hoxton Hall was nominated for a London Cabaret Award last year despite only hosting one cabaret event during the qualifying year.

Londonist‘s Zoe Craig popped in recently for a look around. Here’s what she saw.

The programme lined up by Hoxton Hall’s new artistic director and chief executive Karena Johnson for its next full season is ambitious, extending beyond variety shows to cover theatre both traditional and immersive, spoken word, comedy and a Christmas panto.

The shows range from the traditional to the intriguing. Paul Daniels (who we spoke to last year) will pop in for three nights as part of his Intimate Magic Tour in November. Later that month, Alex Horne goes sans his Section for a pair of solo shows. In December, Piano Circus sees six pianists, each at their own instrument, present an array of work covering Aretha Franklin, prog-metal and an African celebratory parade.

Secret Cinema will partner with the venue to create a new series of events inspired by its series of recent blockbuster creations like Back To The Future and The Empire Strikes Back. Theatre company Outside Edge will explore the area’s connection with substance abuse in Rockston Stories. One can rock out with one’s frock on at the seasonal swing nights held at Halloween and Yuletide. And as for the panto? Snow White And The Seven Dwarves will be in front of you from 19-24 December.

More information on the upcoming programme can be found on the Hoxton Hall website.