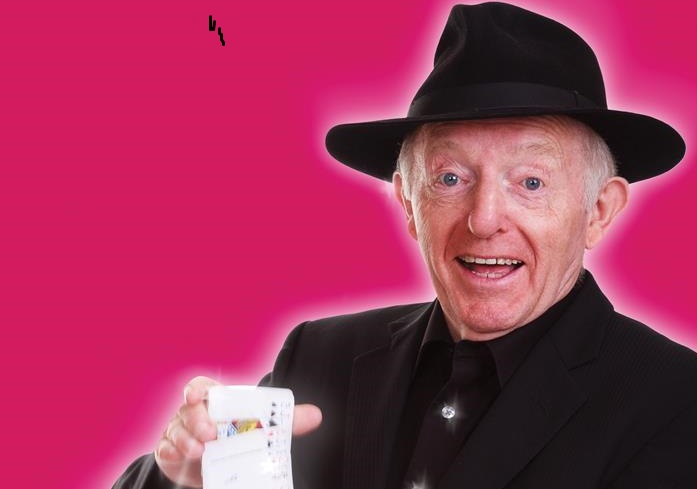 This week, one of the institutions of the British variety scene comes to London as part of his The Final Farewell Tour – From Legend To Leg End. As a magician, Paul Daniels has scaled heights few of his ilk can dream of these days. He graduated from his own stage show to a highly successful TV career crowned by an eponymous series on BBC TV. The Paul Daniels Show ran for fifteen years (in comparison, X Factor has been running for less than a decade) and included a section in which he debunked the apparently paranormal and the tricks of street conmen, arguably laying the ground for Derren Brown and The Real Hustle respectively.

Online, the Yorkshire-born Daniels has garnered over fifty thousand Twitter followers which is impressive for someone not regularly appearing clothed on television or semi-naked in Heat. With the lovely Debbie McGee by his side, he will be appearing at the St Jermyn Street Theatre from tonight until Saturday.

You have been part of and championed variety as an entertainment form for around half a century. What do you find so appealing about it?

The best part, for me, of a many act variety show is that if any one of them is rubbish, there’ll be another one along before long.

What do you hope to achieve with this latest tour?

Your catchphrase “You’ll like this…not a lot, but you’ll like it” came about through dealing with a heckler. What other effective ways have you found for dealing with unruly audience members?

Oh wow, each “heckle moment” is different and I react to suit the moment. There is no one answer. Of course nowadays I tend to get much more friendly heckles than when I began in the clubs.

Since those club days, magic has taken a backseat in variety shows in comparison to, say, burlesque and circus. Why would you say that was?

The vast, vast, vast majority of “magicians” are unable to do any form of stand up, stage or cabaret work. They mostly do pocket magic, something which is now called close-up.

What advice would you give to young magicians working their way up?

Never leave your money in the dressing room.

As you have the rights to Wizbit, can we ever hope to see this the show rebooted or relaunched in some form?

I wish! I tried every TV station and they didn’t want to know.

What do you think of the burlesque tribute to you by Didi Curv’e and Miss Honey Holiday?

Great. What a good bit of business!

In your BBC1 show, you regularly debunked the methods of street conmen and “paranormal” activity. What was the inspiration behind that?

Simple. If you understand what is going on when they do their thing, and see them preying on susceptible “believers”, then you sort of have a duty to show the gullible what is really going on.

You have really taken to Twitter. What is its appeal to you?

I really prefer Twitter to the much more complicated Facebook. It is much more immediate. Also, I seem to attract nice people who are really funny. If you have a problem with anything, just stick it in a tweet and you will get help within minutes.

And who should we be following?

Firstly, people you like. Then experiment and don’t worry, you can always dump them or block them.

How do you feel about your catchphrase after all this time?

It did come in handy as the ultimate and simplest heckler stopper and it went into a dictionary of popular sayings and colloquialisms. Which I think is cool.

You can catch Paul Daniels’The Final Farewell Tour – From Legend To Leg End until Saturday. More details. can be found on the St Jermyns Street Theatre website.