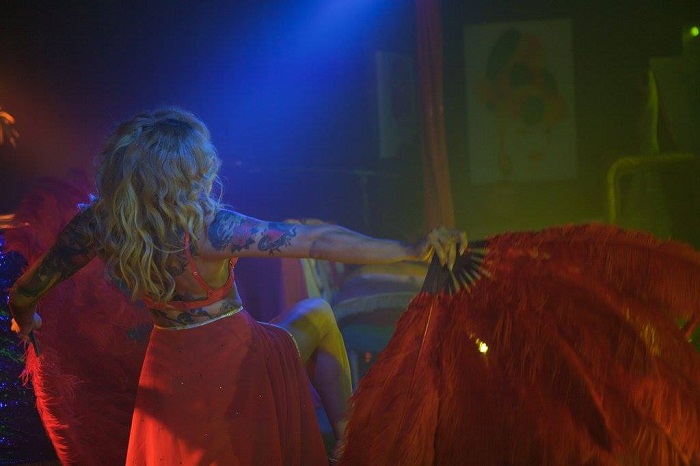 Of all the places, in all the towns, in all the world, new burlesque night The Blue Fez rolled into the Underdog Art Gallery last month. Was it the beginning of something beautiful?

It’s not unusual for cabaret to be political but it is rare for it to reflect what is going on elsewhere around the world. Burlesque dancer and Blue Fez producer Luna Rosa wanted to highlight the richness of the arts in the Middle East and North Africa. She told us, “the current political climate there is one which doesn’t reflect the art that Egypt, in particular, was especially known for so I really want to remind people of that spirit and romanticism in my own way, in spite of the negativity that is in the political air. I want the audience to feel they’re in a place that is hot blooded and exciting whilst wandering through the alleyways of Khan el Khalili in Cairo.” Et voilà, The Blue Fez.

It’s fair to say she has assembled an all-killer, no filler bill for the launch night. Every one of those appearing on stage is an established part of the cabaret circuit. Take pianist/singer Pete Saunders as an example. Probably best known for his association with wedding reception favourites Dexy’s Midnight Runners, he has carved out an impressive career as a blues maestro.

He truly is a demon behind a keyboard with a growler of a voice and a deadpan wit: “this is a show that deals with adult themes, like regret and disillusionment”. As his own Blues & Burlesque shows, his work with Ivy Paige and his performance here amply demonstrate, a live musician of his calibre really does add to the stripping experience. 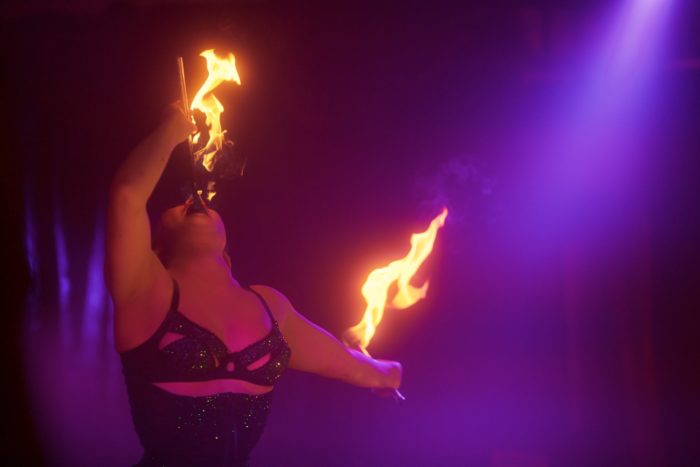 And if it is stripping you’re after, you’re in the right place. Exploding onto the stage, Kitty Bang Bang acts like someone who wouldn’t know fear even it was spelled out for her in metre-high capital letters.

Her fire-breathing and fuck-you antics pump the night with animalistic energy. Her iconic cocktail glass routine seen in last year’s Between The Sheets is cut down here but is no less thrilling for it.  With live backing from Saunders, she raises the excitement levels with every stomp, bump and grind.

And then there’s Vicky Butterfly. We’d be surprised if David Attenborough in all his years has come across a more graceful creature than her. She cuts through the air effortlessly with superlative technique, floating over the stage like a ballerina in full flight.

Her “White Swan” routine is a masterclass in composure, a tapestry of motion featuring huge white feather fans which give the whole act an ethereal and cinematic quality. If you want to see her performances up close, we recommend pulling up a pew when the Scarfe’s Bar cabaret re-commences later this year. 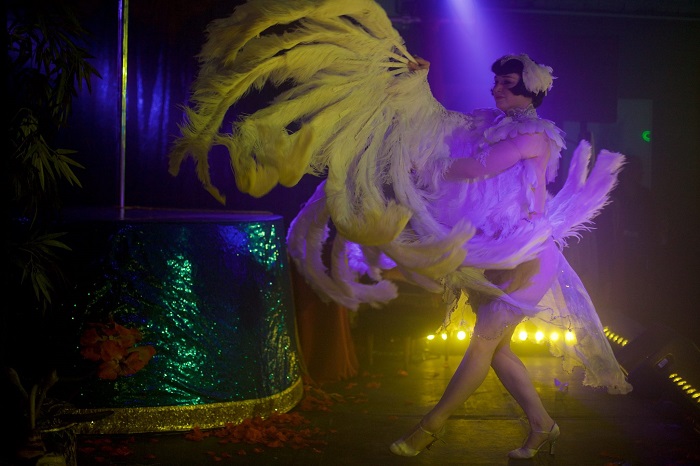 She is joined at The Blue Fez by her Scarfe’s Bar colleague Coco Malone. With a voice smokier than an overfilled hookah, the chanteuse turns this concrete bunker into a cathedral of sound. Her raw and powerful singing pierces the soul and transports us from the hustle and bustle of central London to a more intimate place far off in time and space, a crossroad cafe where one may see anything and everything if one grabs a drink and waits long enough by the bar.

Bursting that bubble, though, is Benjamin Louche. An award-winning compère and producer of the iconic Double R Club, here his contributions strike a markedly different tone to the rest of the evening. Running gags about a furniture delivery and curtains are mildly amusing but not in keeping with the vibe or theme elsewhere while his nods to contemporary politics jerks us out of this imaginary world and back to grim reality. In this crafted atmosphere, some of his jokes come across as comparatively crass. A prize example is when he asks the audience to guess what has two legs and bleeds a lot. The answer? “A dead dog.” 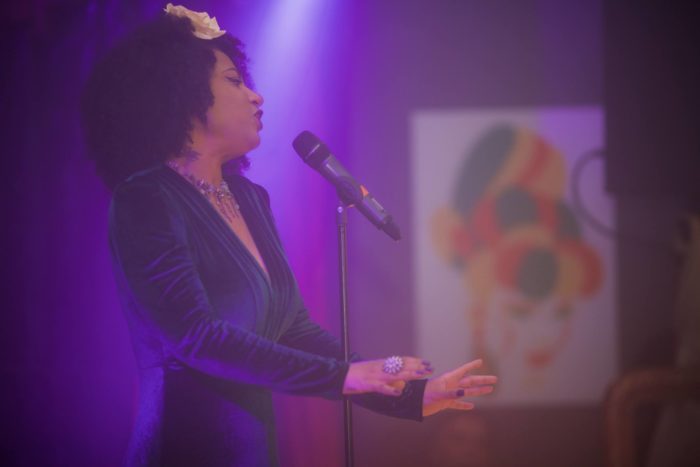 Giving depth, substance and entire layers of meaning to The Blue Fez is the mistress of this ceremony, Luna Rosa (cover image). The dancer spent some time away from the cabaret scene but has come back with routines as exotic and creative as before.

She takes foreign influences and adds complex and involved dance routines and symbolic props big and small, not least a huge fez upon which she climbs. Her choreography is admirable but occasionally blighted by the venue’s dodgy sightlines.

Luna Rosa has succeeded in creating a burlesque show with a distinctive vibe and a quality line-up. The venue may lack the fripperies of more established joints but there’s enough glitz and glamour here to keep all eyes fixed to the stage.

The Blue Fez returns in September. Meanwhile, here’s a glimpse into the launch night goings-on.