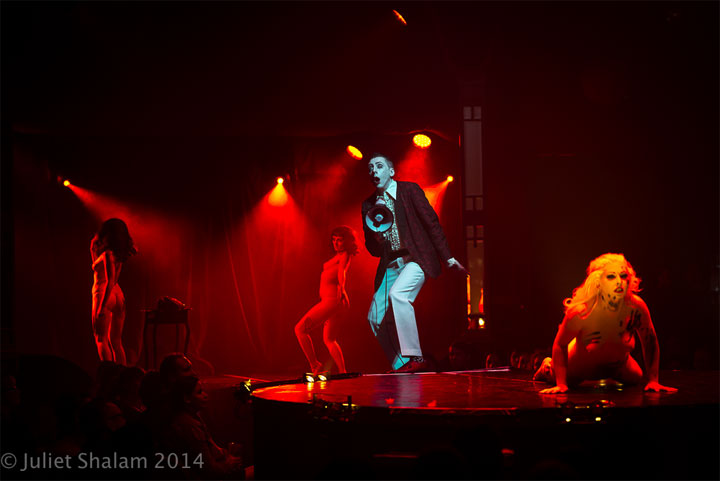 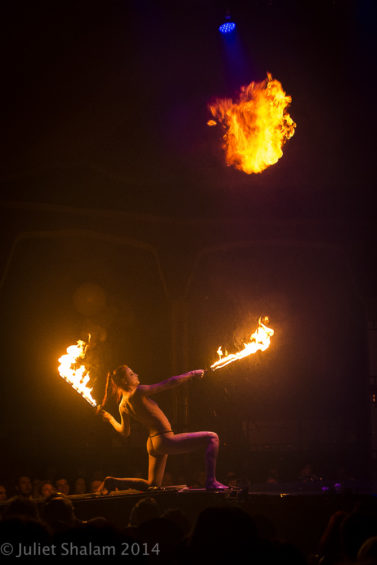 The Double R Club is a curious creature. There’s a dark concept at its heart which is both expansive and invasive. It asks us to look out upon the stage and take in a variety of horrors and delights related in some artistic way to the works of auteur David Lynch, and then to look inwards and connect what our senses are picking up with our desires and fears. Crikey. I’ve seen enough theatre of both the fringe and West End variety to recognise pretentious codswallop at a thousand paces and this Club vibes as the genuine article. It offers a chance to go beyond the liminal point between reality and fantasy and poke below our conscious mind at the unspoken nightmares just under the surface of your everyday thoughts, all in the anonymity of strangers and without the expense of therapy bills.

The concept has propelled The Double R Club through four long years at their usual haunt of the Bethnal Green’s Working Men’s Club. In the much larger Speigeltent, the show both expands and contracts its offering. The side-games which work better in the more intimate environment are abandoned and the set design is developed to add atmosphere and visual depth to a stage which stretches into the crowd. 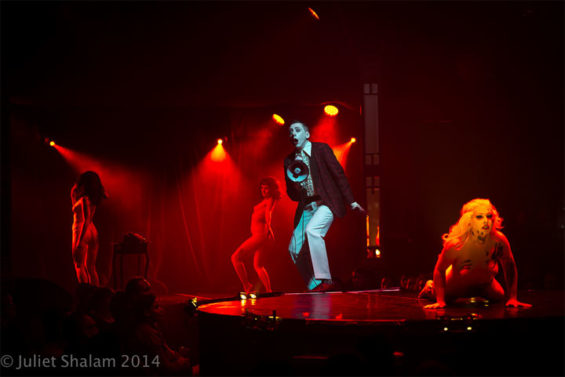 The man who leads us into this surreal wonderland is no white rabbit. Quite the opposite. Benjamin Louche casts a rakish and crepuscular figure who appears the kind to commune with imps on alternate Tuesdays when not playing backgammon with Beezlebub. As the host and compere, his extended verbal interludes begin at an abstract starting point before travelling toward an obvious terminus (to wit, the name of the next performer); the journey is where he casts his spell. Coming across like the unholy offspring of Rod Serling and Mary Shelley, Louche’s words are both the mood music to and the tonal guide through the Double R’s arcane concept.

The host aside, the acts are a mixed bag indeed. Although they all adhere to everything that the show is about, as works of art some are overworked while others barely made an impact. Blanche Dubois approaches the Lynchian theme dead on, creating a cracked cracker of a character, a broken beauty who mentally disintegrates before our eyes. For those few minutes before the act tips over into some kind of mishmash of burlesque and pathos, Dubois is a captivating figure whose battle I buy into hook, line and sinker. Cellist Laura Moody has many tricks and techniques up her sleeve when it comes to making quirky sounds. She is more than capable of creating stripped-back songs with the passion and punch of early PJ Harvey but her performance here sees her cram too much of the weirdness into too short a time with the net result being akin to an aural car crash.

A couple of acts barely raise the room temperature. Michael Wenlock’s routine sees him perform a vertical aerial routine while wearing what appears to be a latex face mask covering his eyes and mouth. Once the initial interest in the clever costume wears off, the circus action is nothing to write home about. Beginning auspiciously, The Ungewinster’s mime show sees his lanky figure gradually emerging from a suitcase. His insouciant grind around the back of the stage goes nowhere slowly and any potency this subtle routine may have had is swallowed up in the empty space around him.

That’s not to say there aren’t some big guns to blow us away. Missy Fatale turns femme fatale for the night and hands out a shot of jazz-infused burlesque noir served up with a cunning twist. Traumata’s routine is a handy dose of sheer sideshow shock after the Ungewinster’s efforts and cuts through the theatricality of the night. Watching her hang over the audience suspended by back hooks is a reminder that, wherever the Double R has taken us tonight, we’re not in happy-clappy cabaret land any more Toto. 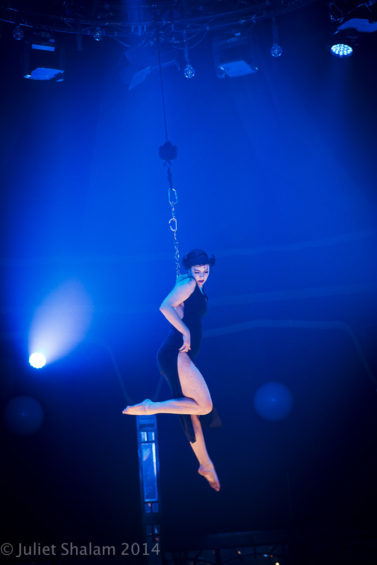 Em Brulée provides her own jarring experience albeit down to the sunny sweetness of her singing. Darkness is nothing without the light and Brulée’s uplifting song is the clear contrast needed to appreciate the nightmare-inducing acts rolled out before and after her. Finales don’t come much finer than whenever the fiery Snake Fervor is involved. Naked but for a g-string, she swings flaming swords around with confidence and panache, finding time to breathe fire into the chill Spiegeltent air. It is an utterly spectacular end to a show where, this time, the concept had the edge over content.

The Double R Club returns tomorrow night for its final show at the London Wonderground this year.