Say Hello, Wave Goodbye: Behind The Songs Of EastEnd Cabaret 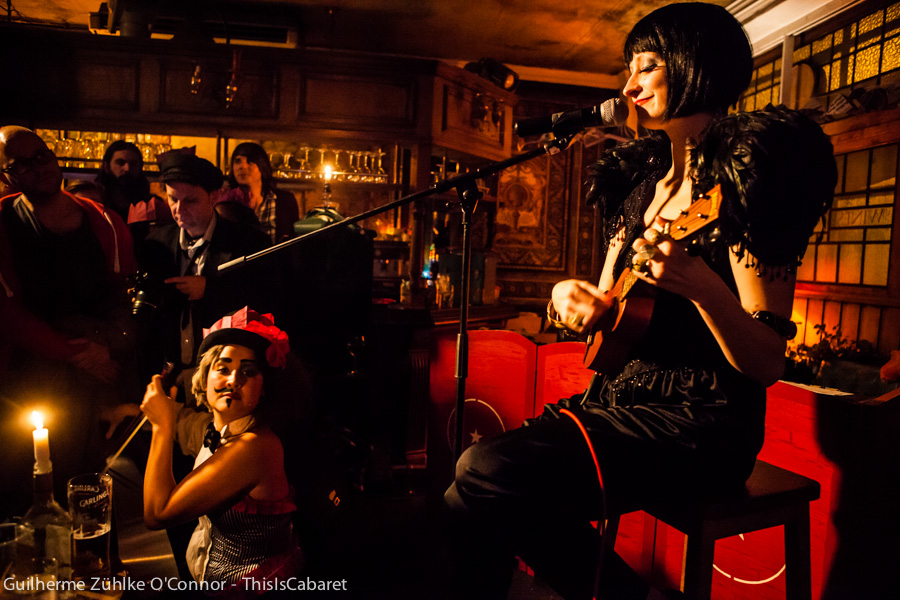 Sex, booze and buses: the sordid origins of some of EastEnd Cabaret’s classic numbers can finally be revealed. 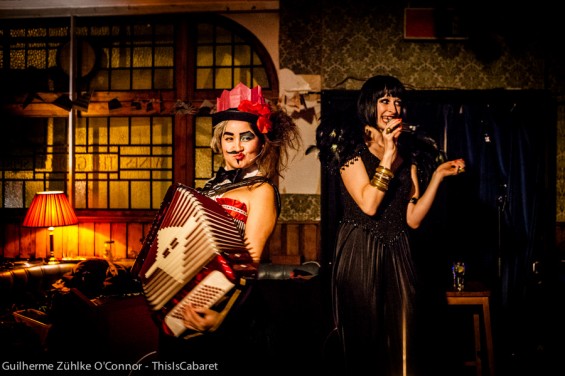 Victor/Victoria and Bernadette Byrne perform Is It in Yet? during last year’s Third Birthday celebrations.

This week, EastEnd Cabaret will be saying a tearful farewell and giving a final fondle to many of their most famous songs with a series of shows at Soho Theatre. We asked the deviant duo of Bernadette Byrne and Victor/Victoria to tell us about the background to some of the soon-to-be-departed numbers.

Bernadette Byrne (BB): One night, I woke up with a start, petrified. Victy said I screamed in my sleep and kicked her in a panic. I had a dream that I had been hit by the number 25 bus and died (which is ironic really, considering the 25 is the slowest bus of all time).  This made me realise that life is short, and I wrote a list of all the things I wanted to do before I died. Deflowering a virgin was at the top of that list.

Victor/Victoria (VV):  Needless to say, it did not go so well. I did warn you. Repeatedly.

VV:  We wrote this song after a trip we took to Thailand.  We had such an amazing time – sitting on the beach in the sun, riding real live elephants, I even had a go at kite fighting! But one night, as many people do, we wandered down a small side street and found ourselves at a ping pong show. Bernadette was quite enthralled.

BB: It was just such an incredible skill to see! I was in absolute awe of these very talented women. Some could even shoot darts and pop a balloon on an unsuspecting punter’s head. I had to try it for myself…

VV: …and whilst her enthusiasm was admirable, let’s just say she never quite made it to the darts.

BB: This is a skill that Victy actually taught me – the art of self-love in public. She is the master, the black belt. I had never heard of it until one day we were at our local swimming pool and I saw Victy flailing in the water. I got the life guard to go in to try and save her, but I think he got a little more than he bargained for.

VV: I did tell you that I was fine! I think the life guard secretly enjoyed it, anyway. But the key is stealth. You have to be resourceful, find adequate cover in your surroundings. Remember, the more chance there is of being caught, the more exciting it is.

VV: We wrote this song when we were both extremely hungover – no real surprise, considering that our bloodstream is now 78% gin-based. I don’t quite remember what we had been out celebrating the night before, but I guess you don’t always need a reason. When you are with friends, there is always time for one more drink.

BB: It is a song about a hideous hangover. I was in the foetal position on the couch wearing a traffic cone on my head and Victy was covered head to toe in popcorn. Our philosophy is that as long as you have a good story to tell in the morning, the pain is worth it. Always.

There’s still time to enjoy these songs in the flesh. EastEnd Cabaret will be at Soho Theatre until 4 May. More information here, darlings.

Alternatively, keep your powder dry for a new show this summer at London Wonderground curated by EastEnd Cabaret. Silencio is a “cabaret re-imagining of silent film classics and a surreal Twilight Zone”. We’re already moist at the very thought of what that could entail.

All images: Guilherme O’Connor exclusively for This Is Cabaret.