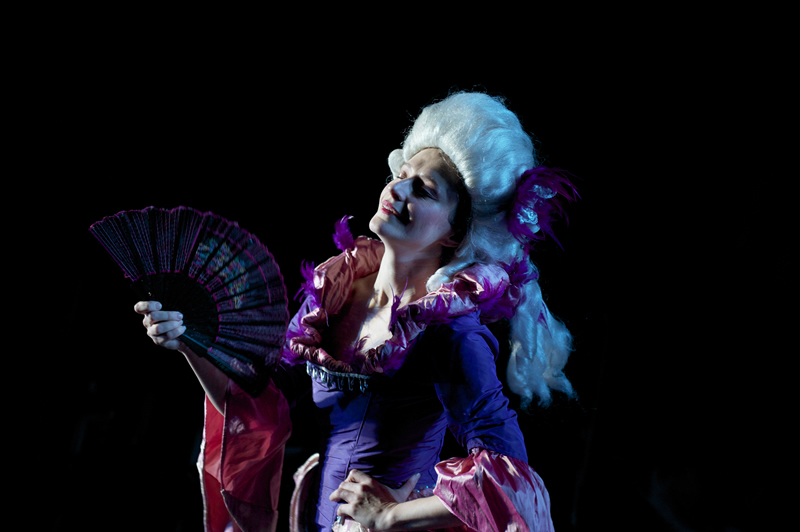 Danielle Tarento’s new production of Broadway musical Victor/Victoria has started its run at the Southwark Playhouse. Who better to review it than the eponymous multi-instrumentalist hermaphrodite from musical comedy duo EastEnd Cabaret?

How is it possible to be growing facial hair and a burgeoning bosom at the same time? That’s what a garden-variety nerd, interested only in practicing the third movement of the Moonlight Sonata, reading Virginia Woolf biographies and listening to the BBC World Service, was wondering, lying awake at 2 AM in a cold autumn eve in 2002.

Switching on the television, that teenager saw Julie Andrews in a sharp tuxedo. The film was Victor/Victoria, and that was the moment I realised that sexuality was not a rigid thing. It could be as playful and fluid as whatever you wanted it to be. And the musical, in all of its cod-Shakespearean, high-kicking glory, was the perfect indication of this to me at the time. Girl alone inParis, girl meets gay best friend, gay best friend invents wild scheme, girl dresses as man dressing as a girl…for an 1980s film, it was pretty glamorous. Or at least it was to me, living in a backwater town far from the Parisian nightclubs.

Fast-forward ten years later. It’s a cold autumn eve in the year 2012. Now a full-fledged half-man, half-woman oddity (a lot of hyphens there) living and working in the modern cabaret world, I was invited to watch the Southwark Playhouse production of Victor/Victoria. Needless to say, I was apprehensive. This film has been a major influence in my life, inspired my name and my way of living. What if they ruined it? Or worse: what if it was mediocre?

Luckily, it is a lively and life-affirming production, featuring a cast that embraces the high-campery of Blake Edwards’s book with, dare I say it, gay abandon. In fact, it makes the film seem quite straight in comparison. Anna Francolini is the well-measured and suitably affecting Victoria Grant, an English soprano in 1930sParis, trying to make ends meet. Giving a vocally assured performance, Francolini’s Victor is nicely self-possessed, contrasted withVictoria’s lovelorn vulnerability – a difficult mix. Richard Dempsey is a delight as the youthful, endearing Toddy, the nightclub singer who persuadesVictoriato become Count Victor Grazinski.

Cleverly staged at the Playhouse’s railway-tunnel structure with a few cabaret-style tables (used by both cast and audience), the play creates an underground, decadent feel. The show-within-a-show nurtures intimacy between performer and audience. Sitting in the front row, I can look a member of the ensemble in the eye, nearly having to duck to avoid a Fosse-inspired kick to the face.

But this is where I feel the difference between a musical theatre take on cabaret, and real spit-and-sawdust cabaret. The cast, whether delivering a funny line or an emotional number, stare into the distance, alienating the crowd. Even a comical burlesque-inspired routine from Kate Nelson as gangster moll Norma is more concerned with aesthetics than the tease. A true burly girl recognises that we’re hanging on to each twirl and shimmy, and the appreciation is always mutual.

I know that I am seeing this through a cabaret-tinted monocle, but audience engagement should not be an exclusive treat from variety stages. The table lamps in Victor/Victoria switch on and off to distinguish between the “show” numbers and the narrative songs. The performances don’t do the same.

The songs, composed by the great Henry Mancini with lyrics by Leslie Bricusse, are not the most memorable in musical history, but signature number Le Jazz Hot sparkles when coupled with Lee Proud’s vivacious choreography. The seven-piece band is excellent, and it’s a damn shame that we only get to see them at the end for the curtain call: the musicians’ absence detracts from the nightclub ambience of the production. All in all, however, Victor/Victoria is a compelling show, with a simple love story at its heart.