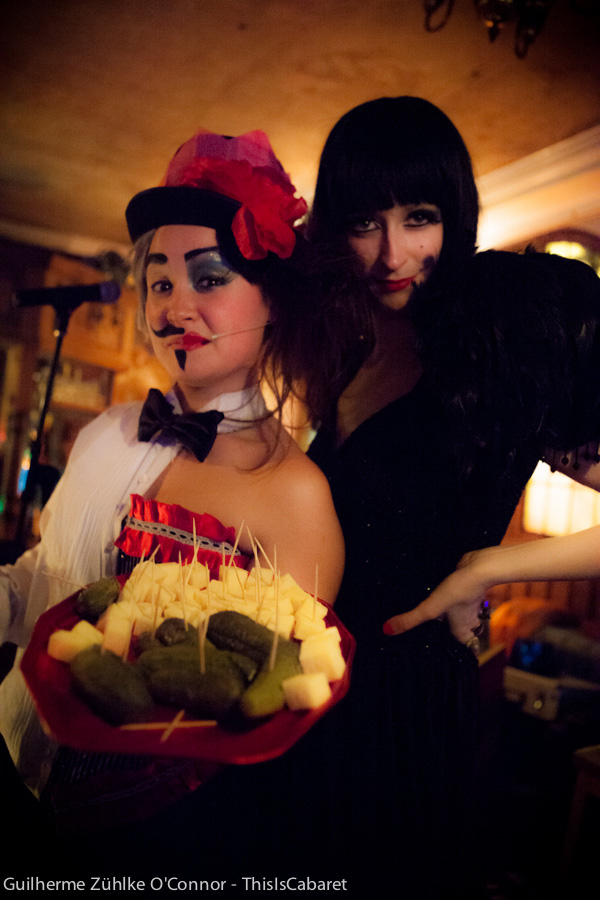 An event announced as “the most salacious third birthday in history” was bound to turn more than a few heads, though thankfully none from Ofsted. EastEnd Cabaret’s anniversary special honoured their tradition of indecorous musical comedy with an unusual setlist, spewing filthy favourites and bawdy B-sides all over a packed George Tavern. A small affair for big lechers, the show was a return to their early days in many ways: as with their debut in late 2009 at the Stepney indie venue, the function had a nostalgic ticket price of £3.

“Small”, of course, is a relative concept for cabaret figures. Squeezing close to 250 people into a music pub is just about as small as Bernadette “Bernie” Byrne and Victor “Victy” Victoria get these days. Despite the swollen crowd, though, the night kept a consistent casual vibe. From the pre-show appetizers passed around by the artists themselves (cheese, jelly sweets and “party gherkins”, which multi-instrumentalist Victy allegedly exposed to James Brown and George Clinton tunes) to their posing for photos after the encore, EastEnd Cabaret treated a motley of fans, close friends and fellow cabarati to two close-quarters sets comprising a dozen picks from their repertoire.

Seldom-played early songs reaped widespread cheer on their comeback. After three years, some of them sound tame in comparison with the average output by the authors of Kegelian anthem Ping Pong. Early compositions Christmas Fish and the cannibalistic tragedy of Harry (Was a Pigeon) feature little sex, but stalker confession Rohypnol’s Not Fun, Victy’s first solo number, prefigures much of their later political incorrectness. Many in attendance were hearing those ditties for the first time.

Popular covers like I’m Too Sexy and The Bad Touch didn’t make the cut, but the noisy mob watched in entranced silence while Bernie and Victy dramatised their rather literal multi-fetish mash-up of Kings of Leon’s Sex on Fire. The Origin of Love, from Hedwig and the Angry Itch, provided the biggest surprise of the evening: a candid torch song in an EastEnd Cabaret performance. The break in tone from their customary stream of lewd gags proved jarring, but the pair’s take on the emotional ballad brimmed with moving lyricism. 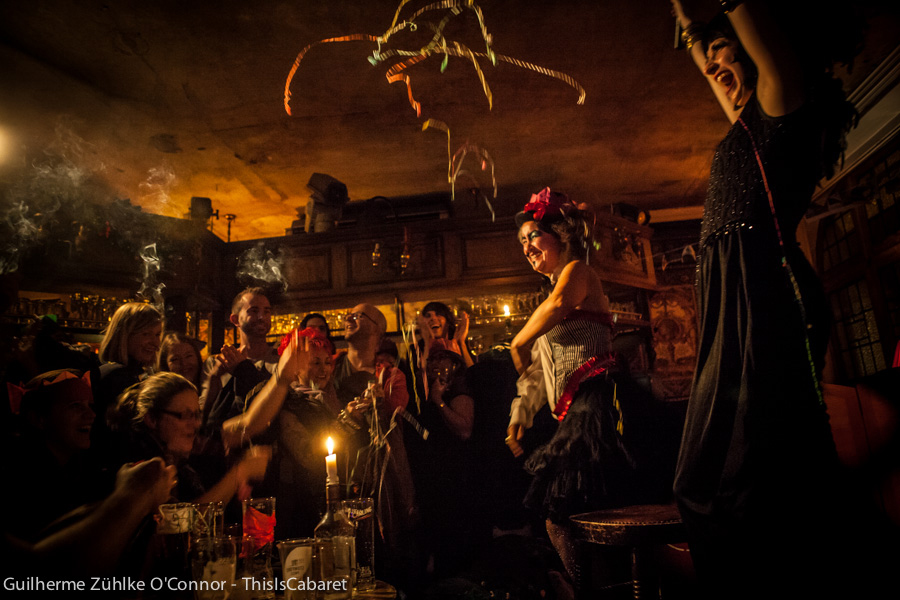 The lifeblood of every EastEnd Cabaret set is their peerless sexual satire, and the birthday knees-up was no exception. The Balkan rhythms of Victy’s accordion bookended the festivities, opening with virgin-deflowering waltz Is It in Yet? and spurring on the enthusiastic clap-along encore of Drinking Song. For the exhibitionist celebration of Danger Wank, their theatrical antics included swimming armbands and other props. I shudder to think of what kinds of exoteric gear lie hidden behind that red screen in front of their keyboard.

The lascivious prima donna and her accompanying hermaphrodite have moved on to much bigger venues since they first stepped onto the George Tavern’s minute stage. Looking back, though, it’s remarkable how the basic format of the show, essentially unchanged, has kept its poignancy. Their return boasted the same intense audience rapport that has defined their raucous gigs for the past three years. It could be a while until you get another chance to join them at such close range, but EastEnd Cabaret will plunge you into the depths of their immorality wherever you are.

If you can remember them, you weren’t there. Check out the ten gigs that defined EastEnd Cabaret in our exclusive retrospective.