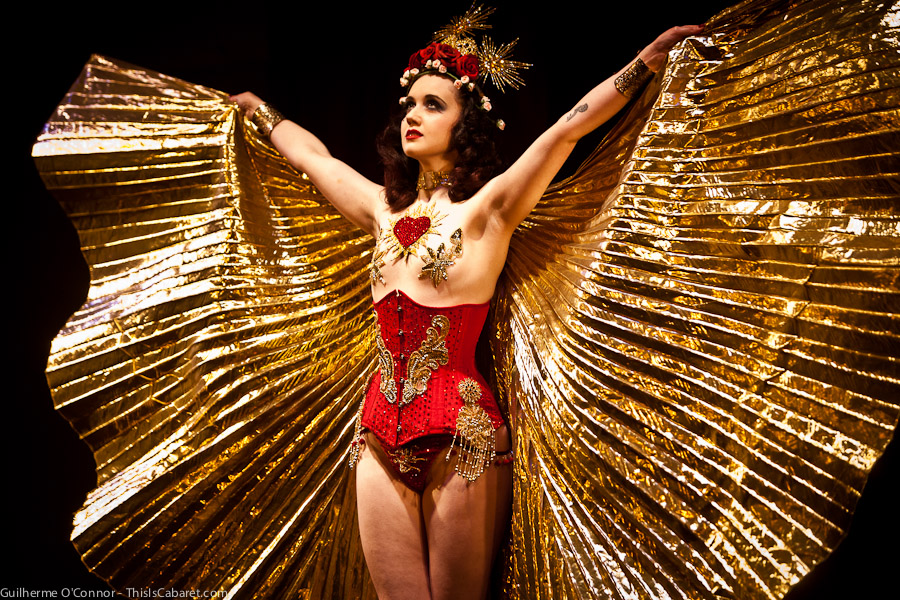 The evening proceeds with a good supply of vintage beauty. Blonde pin-up Frankii Wilde channels an air raid warden that would prove quite distracting in an emergency. Miss Amarettease, in turn, danced in and around a giant top hat. Though visually striking, the number’s reveal is spoiled by a costume that exposes her pasties from the start, and further marred by an awkward hopping choreography.

Act of faith: Eliza Delite incarnates the mother of God at the World Burlesque Games

Whatever controversy could surround her Virgin Mary routine is promptly dispelled by the disarming charms of Eliza Delite. Donning a lavish costume complete with a crown of roses and a Sacred Heart, the belle spins her resplendent Isis wings into shapely patterns. Rendered even more candid by the soundtrack of Like a Prayer by the Vitamin String Quartet, the act is so guileless it couldn’t stir even the most fanatical zealot, and earns Ms. Delite the top award of the showcase with its dainty spectacle.

Divinity of a more sensual kind marks Liberty Sweet’s drag king skit, in which Hercules undergoes a Tiresian sex change to get in touch with his feminine side. Proving that walking on high heels is harder than slaying the Hydra, the Folly Mixture hits a delightful balance between funny and sexy. Coco Deville attempts a vague narrative where a Pagliaccio-style clown mourns a popped balloon, while fire breather Billie Rae indulges in poise and elegance as a clockwork music box ballerina. Contributing her absinthe act, Bettsie Bon Bon sheds her many-feathered green costume with great deliberation, and flaunts crisp moves in a boiling hot striptease that sends the crowd roaring for more.

Dangerous curves are the business of a gun-totting Suri Sumatra, who builds up a slow tension through her femme fatale film noir tribute all the way to a surprising cannon blasting finale that leaves a trail of confetti from the stage to the door. Spider-woman Venus Noir wields ingenious props and costume, including hard cobweb-shaped fans and stockings that peel themselves at the pull of a string. The number climaxes with a brilliant web-spinning twist (I won’t spoil the surprise), but drones on with stiff dancing and stripping, despite all the eye-catching gimmicks.

Simple and straightforward, Secrets in Lace model Dinah Might’s cat burglar routine is quintessential cheesecake burlesque, brimming with exuberant teases and tongue-in-cheek satire. Caught in a frustrated heist, the thieving bombshell goes from prisoner to escapee in a story advanced by clever costume changes. The quick-paced sketch is funny, provocative and thoroughly entertaining. 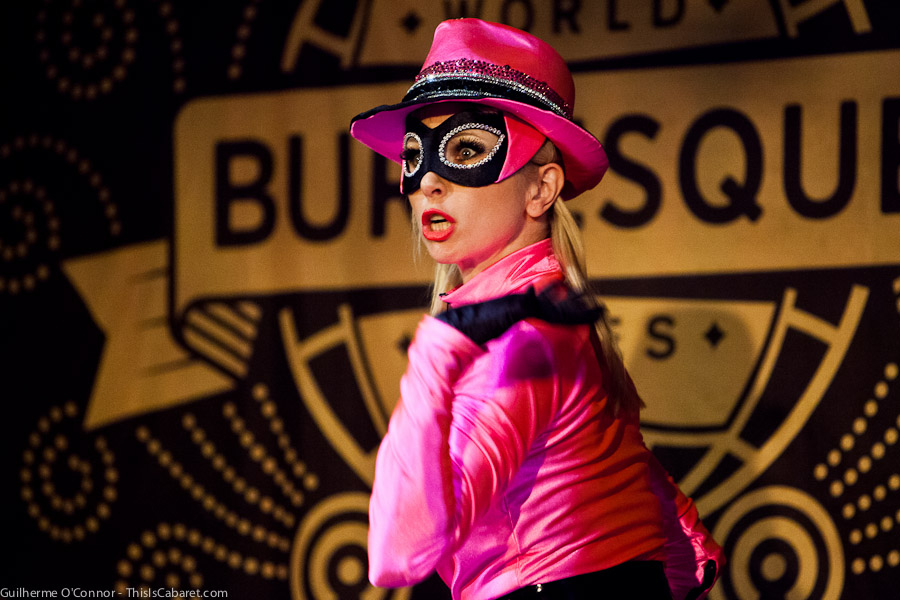 A 13-act extravaganza, British Female Crown offered a cross-section of burlesque talent from the local scene. If Britain is as well represented in the upcoming Olympics as it was in the World Burlesque Games, there might be a few medals left behind in the event’s aftermath, instead of just a bunch of tube delays and traffic disruption.