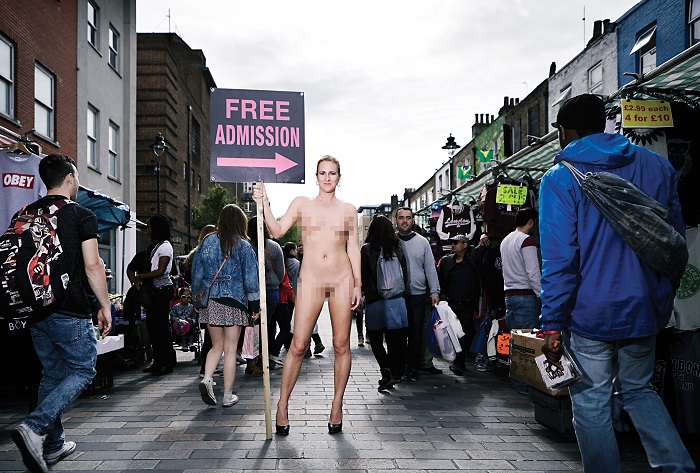 Ursula Martinez is not shy about exposing herself in the name of art. Her burlesque-cum-magic red hanky routine made her name over a decade ago and, when a performance of that act was unofficially uploaded to the internet, Martinez turned her feelings about the affair into her one-woman outing My Stories, Your Emails.

In that show, the La Soiree star blended her thoughts on the responses and those who sent them with an autobiographical elements from her growing up in sunny Croydon. Free Admission (opening this week at the Soho Theatre) takes that artistic digression a step further. The nudity is still here but she now wants to expose her innermost thoughts on not just her fans but also politics, sex, religion, philosophy, her marriage, feminism, social media et cetera et cetera. In short: pretty much everything.

Rather than a microphone, she spends much of the show behind a breeze block wall which she puts together brick-by-brick. What that barrier stands for is anyone’s guess as she never explicitly expounds on its significance (perhaps its a visual pun on free masonry?). Amid the South London swagger and bluster, there are some interesting contrasts made: at one point, she repeats the nasty jibes of her childhood which poked fun at race and disability then later talks about our modern society’s pre-occupation with having “beach-ready bodies” and finding out the exact gender and sexuality of those in the media spotlight. Have we really progressed as a civilisation? Martinez suggests not.

Social media plays a large part in Free Admission. There are some witty observations (“why does the ‘me’ tagged on Facebook look like she is having more fun than the ‘me’ that was actually there?”), a few hackneyed laments over how online attention can be seen as virtual validation and a tagged-on last minute selfie with an audience member. Given how much this aspect of life has been documented, parodied and discussed already, it feels a little redundant in a show which doesn’t need to explore this particular rabbit hole to make its points.

Ultimately, Free Admission is a stepping stone in Martinez’s career as she moves away from her cabaret roots and more into the realm of theatre, comedy and performance art. Now that she has franchised her most famous act, she will have more time to make bolder steps than this show in that direction. Free Admission doesn’t say anything new about Martinez or her subject matter but, if she delivers on the promise shown here and in My Stories, Your Emails, it will be an important milestone in this performer’s career.