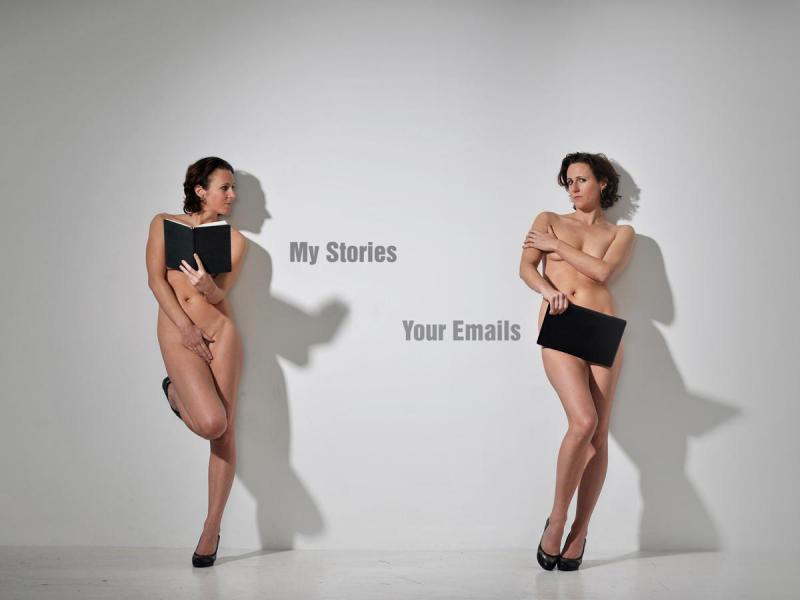 You there at the back! Sit up and listen. Ursula Martinez’s My Stories, Your Emails isn’t the kind of lecture you want to fall asleep in, trust me.

This doyenne of performance art is not an easy one to ignore in the flesh. While some of her ilk create abstract works denser than week-old bread, Martinez’s work tends to go for the jugular. A case in point is the elephant in the Southbank Centre’s Purcell Room namely her Hanky Panky routine, an act which has threatened to eclipse everything that she has done before and after. It is a perfect juxtaposition of magic and striptease which does credit to both art forms while being something entirely apart. Judge for yourself. (Warning: the video is very much NSFW.)

When an unauthorised video of this act made its way onto the internet back in 2006, there were three waves of reactions. The initial one saw Martinez receive hundreds then thousands of messages from around the world. While some were appreciative of the art, others focussed on the more sexual element of the act telling Martinez how much of a slut she was and how much she turned them on (with pictorial proof attached in at least one case).

Martinez, in turn, created a long-running show around the responses and since 2010 has taken My Stories, Your Emails to the Barbican, Soho Theatre and now the Southbank Centre. Finally, the show caused consternation and concern in many of the critics tasked with making sense of it and whether her public exposure of the offending emails was ethical. The Guardian accused Martinez of “double-dealing” before pontificating on whether art is above morality (presumably joining finance and politics). The Independent’s Rhoda Koenig, meanwhile, got her knickers in a bunch over the idea that a lesbian artiste had received almost £5,000 of Arts Council money for this show: “I wish that none of my money was being spent making people feel superior to men who seek sex on the internet.” Which roughly translates as “do that man-hating thing on your own dime, honey”.

As the title suggests, My Stories, Your Emails is split evenly between tales of her kooky upbringing and the responses to the Hanky Panky video. As well as painting the broader picture in articulate terms, Martinez evokes foreign accents and pictures of a very long schlong to bring to life the very human details of her topic. The biographical elements add emotion, colour and dimension to a production which, in the hands of most modern comedians, would have been purely a slideshow of the more pathetic emails. Martinez wants us to know who she is and where she came from and, in so doing, exposes more of herself than that illicit video ever did.

But do these reactions to an eight-year-old video and an even older act still warrant our attention? Yes, and now more than ever.  If the recent revelations from Edward Snowden et al have taught us anything, it is that privacy is very much a twentieth-century concern that has been supplanted by fears over increasing levels of surveillance – and not just by the government. Social media sites like Facebook and Twitter make stalking more of a cakewalk than ever and reality shows grind the public’s faces into the affairs of folk from places from as far afield culturally and geographically as Newcastle and Chelsea. These days we’re all watching each other watching each other so, in its unabashed scrutiny of her own family and certain morons of the male species, My Stories, Your Emails was ahead of its time. And certainly worth an hour of yours.