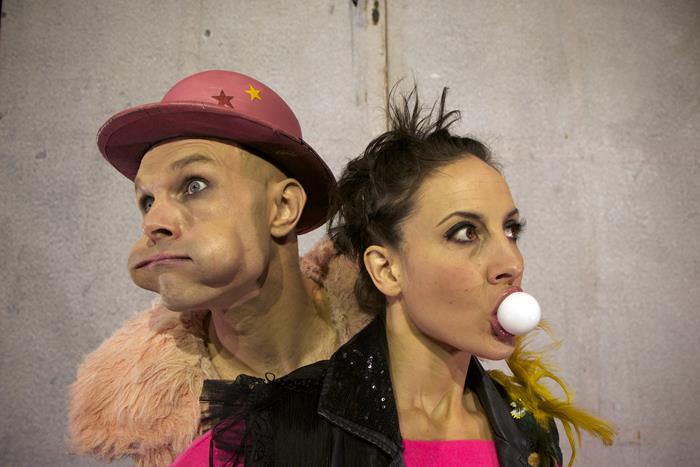 There’s something more than a little sinister about La Soirée which has opened in London after a three year absence. It’s difficult to pinpoint; it’s certainly not one act more than any other or a particular moment. There’s just a feeling that pervades that this show is kind of, well, off-kilter.

This is direct contrast to much of the circus and variety around which has been getting a little cooler recently. There have been more festivals devoted to these genres across London and the rest of the UK and they have wriggled their way into more club nights, and major events – film and television have started to reflect this, suggesting that they are crossing over and becoming even a little mainstream.

Circus performers are often portrayed as lean and fit, beautiful versions of what humanity could be if it only went to the gym more, didn’t finish that bottle of wine at the end of the night and maybe ate one less burger and smoked one less cigarette. The specimens at La Soirée, on the other hand, seem to be generally populated by the kids who got picked on at school. As Scotty The Blue Bunny says proudly, just before bestriding a huge balloon, “whatever was used against you – whatever part of your personality that held you back as a child – just might be what you get paid for when you’re all grown up.”

This is a show that exults in the weirder side of what the human can do. Despite the great diversity of the acts – from aerial circus to bawdy standup to singing along with a clown – the show retains an admirable coherence due to its slickness and comic presentation. Jokes come thick and fast and a number of acts reference earlier comedic moments, giving the show a unity despite the lack of compering or otherwise interrelation. A good example is Jonathan Burns, whose goofy contortion sees him fold himself through a toilet seat while adopting a character that seems to be a kind of cross between Screech from Saved By the Bell and Napoleon Dynamite. Elsewhere, Asher Treleaven impresses with high level “sexy” Diabolo routine. Neither of these acts are exactly the definition of cool, but both elicit loud rounds of laughter.

Sex is at the forefront of a number of the acts. Treleaven’s later reading from Mills and Boon is wonderfully absurd and filthy. Then there’s Wau Wau Sister Tanya Gagné‘s gender bending trapeze burlesque or Ursula Martinez’s Spanish rendition celebrating female masturbation and total sexual revolution. She later performs her signature magic act Hanky Panky, a routine which sees her gradually disrobe in order to prove that a red handkerchief has not been hidden up her sleeves; with no more clothes to remove, I’ll leave you to guess where the hanky finally ends up. This isn’t, though, a sexy show. Much of the music is ironic eighties references and the presentation lets it all hang out rather than exploring tease and titillation.

There isn’t a poor act throughout the night and the skill level is consistently high. David and Fofo‘s unusual double trapeze and ping pong ball adagio is very well choreographed. Marcus Monroe‘s machete juggling and Jess Love‘s hula hoop are all the more impressive for being on such a small stage where the room for error is greatly reduced.

With a decade of experience, multiple awards and sellout runs under its belt, La Soirée has had the time and space to explore and find its own format. This is high level, slick cabaret, cheeky, naughty, filthy, fun, irreverent yet weird enough to be memorable.

The show ends as it starts with Puddles Pity Party, a sad giant white clown with a voice that is truly beautiful; while everyone else is enjoying themselves, his heart appears to be truly breaking. It is a magnificent performance and the epitome of a show which demonstrates the rich and exciting place cabaret is right now in London.