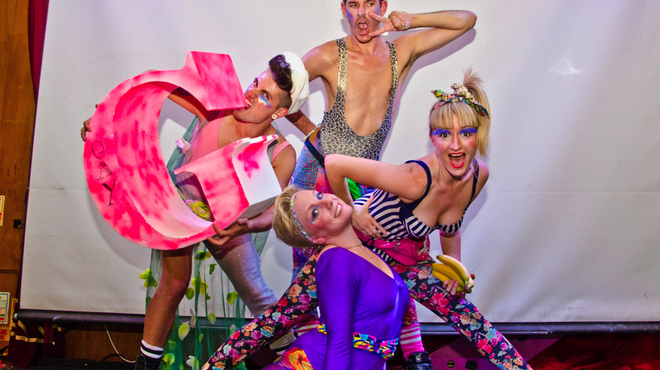 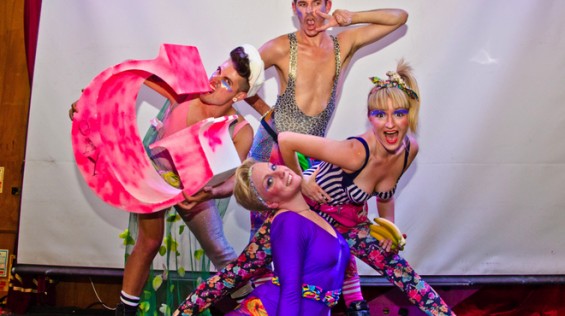 The Summer Ball was a place where boundaries were queered and categories pushed aside in favour of glitter-fuelled extravaganza. Image (c) Jacob Love

Let the Pride in London 2014 celebrations begin at Troxy with the Sink the Pink Summer Ball, a bigger and better version of the legendary club night organised by Glyn Famous and Amy Zing. Celebrating art, fashion, performance and fluid identities, the Summer Ball was a place where boundaries were queered and categories pushed aside in favour of glitter-fuelled extravaganza.

The highlight of the evening was none other than the Vengaboys bringing their ultra-camp, 1990s Europop to the Troxy. Apart from performing their biggest hits including Boom, Boom, Boom, Boom!! and their latest World Cup tribute 2 Brazil! (watch the music video, now), the Dutch supergroup also covered songs including LMFAO’s Party Rock. The Vengabus brought the party with them, and was definitely responsible for the heatwave on the dance floor.

In the tradition of 1990 documentary Paris Is Burning, Sink the Pink hosted its very own drag ball with categories like Club Kid Couture, Sink the Pink Wrongness, Goddess and Vintage Queens. It was a deliberately mindless revelry: the drag queens won absolutely nothing but the chance to sashay on the runway while the audience got to gag on the outrageous fashion choices and pick their favourite gender benders with cheers and claps. With a stellar lineup including Scottee, Jonny Woo, Jodie Harsh and Holestar hosting the ball and performing alternately, there was no reason not to party till the sun rose.

The magic of Sink the Pink is that it is not like any other club night or gay event in London. It was created to provide a space with no judgments – where no-one questions your sexuality or challenges the definition of drag. It is a festival for lovers of camp, avant-garde and ridiculousness. Everyone could come as they are without feeling out of place, to celebrate the freedom to love with about 3,000 other people and the finest of East London’s drag scene.

Attending the event with two female friends, we felt a strong sense of belongingness and even safety as we stepped inside the Troxy (a nice change from being catcalled and having racial slurs thrown at us on our way to the event, on the side streets of Stepney Green). Standing amongst fierce queens in towering heels, ladies in sequins and baklavas, and an old gentleman in a university gown, we felt like we belonged to a community, and we could be anything.

There really was no better event than this to open Pride in London 2014. Together we are strong, and this week we are out and about celebrating the diversity that makes the London LGBTQ community so special.