Review: Palace Of The Snow Queen 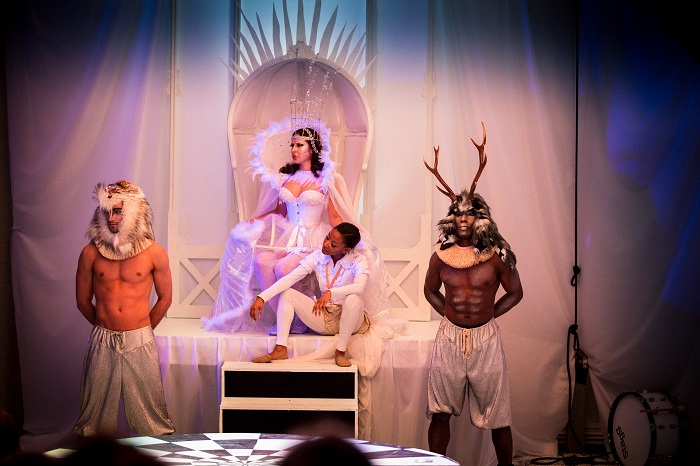 Snow does terrible things to London. Railways choke up at the first sight of a snowflake, roads become seas of putrid slush and pavements turn into slippery deathtraps. The sudden influx of frozen water also inspires some awful shows. One such is The Palace Of The Snow Queen, a production by the creative crew behind Black Cat Cabaret which promises much but delivers little.

The venue of the show is in a secret location somewhere in the general Shoreditch area. Once found, there’s an unprepossessing outer chamber where a man unconvincingly dressed up as a faun warns us that Her Highness prefers to meet people who are shorter than she is. Given that the Snow Queen (played by burlesque dancer Giddy Heights) is on the petite side of petite, that wasn’t a feat I had a snowball’s chance in hell of achieving anytime soon.

Inside, there is a large open space much like a wedding marquee – food is being served in one corner, a DJ is set up in another and there are plenty of well-dressed strangers milling around. All it needs is a handsy uncle and an aunt well into her cups and this party would be good to go.

Also, like any other wedding reception since the beginning of time, many in the crowd are languidly killing time by checking each other out while trying not to look mortally bored. There’s barely enough seating for half the audience – and with doors opening over two hours before the first sign of any actual entertainment, that’s decidedly Not A Good Thing. A ticket price of £25 (covering the show and after party only) usually commands in modern cabaret at least somewhere to park one’s posterior – let’s hope this isn’t a sign of things to come next year.

When the entertainment does get going, it does little to save the evening. A dull expositional opening that would leave JRR Tolkein wincing is followed by the Snow Queen entering her royal court and introducing the acts – sorry, “royal prisoners”. Stephen Williams is an excellent physical performer whether on the ground or, as seen here, on aerial chains hanging from the ceiling. His routine, though highly skilful, lacks his usual passion or charm. At least he was more fun than folksy duo Mazaika that followed him. The poor sound design means that their high-pitched accordion and violin pieces occasionally sound like an internetful of lolcats being thrown down a very long staircase.

And that was it for a first half which lasts barely fifteen minutes before an interval of three-quarters of an hour. To summarise, the first three hours of this experience has consisted of standing around in a pretty white marquee with two acts and some hammy drama to break up the ennui. As winter experiences go, this is so far ranking somewhere between being trapped on a train being diverted via Strathclyde and getting frostbite of the groinal extremities. The food and drink is smelling tempting but, at £6 for a pulled pork panini (dear London: enough with the pulled pork already) or £4 for a plastic cup of mulled wine, we’re good, thanks.

Theatrical cabaret is all well and good when there is a solid show at the heart. Without that core, the pretensions become more apparent and there is less patience for the failure of periphery attractions. There’s no sign of or to the promised photo booth and the “wandering character entertainers” seemingly consist of attractive men and women in costume walking nonchalantly through the crowd without discernible direction or purpose. Adding insult to injury, an alarm goes off during the forty-five minute interval. Whoever directed this drawn-out affair makes Peter Jackson look like a total amateur.

The event’s fourth hour opens with the Snow Queen again ascending her throne. By this stage, I really try to care about what happens next but it’s not easy. Lili La Scala’s Sugarplum Fairy act sees her rock the buxom bierkeller wench look as she literally presses both bosoms and her bottom into service, leaning the former into faces and placing the latter onto the laps of some of those seated. Pixie Le Knot and Yasmine Smith produce an artful and fluent display of duo contortionism which makes good use of the space. The Snow Queen herself brings the second fifteen-minute half to its climax with an enthusiastic bump-and-grind to Vanilla Ice’s seminal 1990 rap classic Ice Ice Baby. And, apart from the DJs, that’s all folks.

For some reason, a curious and possibly apocryphal story about that song comes to mind at this point. After a dispute with his label boss Suge Knight over the rights to Ice Ice Baby, the rapper found himself being dangled by the feet from the balcony of his Las Vegas hotel suite by Knight’s bodyguards. Hanging upside down and watching the traffic pass by him below, Vanilla Ice may have wondered what exactly he was doing there. I was wondering much the same.