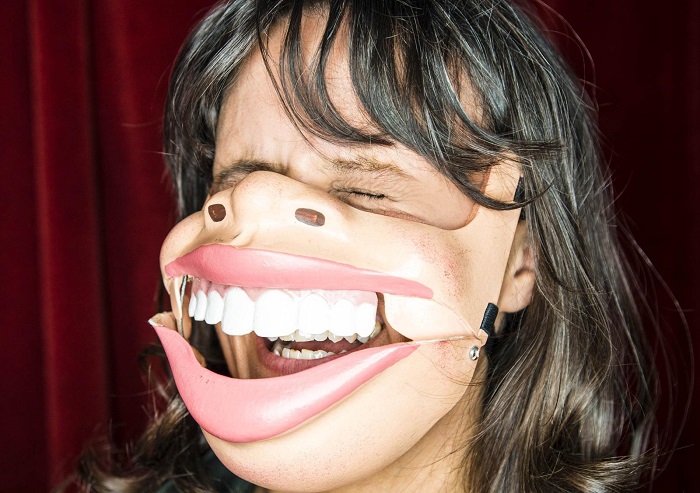 “You can tell you’re rocking the gig when you can hear the Piccadilly Line trains going by,” is just one of more printable pokes said by Nina Conti’s sidekick, Monk. Appearing with its owner in her latest outing In Your Face, the snarky toy monkey is just one reason why the ventriloquist has picked up awards and become a YouTube hit.

Conti and Monk are a genius pairing. The simian sidekick jokes around that it is just a puppet with a hand stuffed up it but Conti imbues her creation with all the rude wit and radioactive charm of a dirty old man. It’s like Steptoe and Son with the verbal scrapping but without the scrapyard or Noel and Liam with all the sibling banter but none of the fisticuffs. No matter how polite or contrite Conti attempts to be, Monk is always there with a lewd or crude riposte and their “double act” is sheer magic.

The highs and lows of In Your Face come from its avowed emphasis on improvised humour. Even before volunteers are strapped into Conti’s now-famous masks, Monk interrogates random audience members with nary a worry for their sensibilities. The first three in the firing line are a solicitor studying for a role in “commerce”, a forex trader and someone in property investment. While these are the kind of people that some would happily feed face-first into a log-grinder, they are just more grist to Monk’s comic mill.

Later on, Conti invites up on stage a police officer, a satellite co-ordinator (nope, me neither) and a couple of guys; the latter identify themselves as a milkman and a postman but carry with them the air of “resting actors” or possibly something useful like trainee baristas. What she puts them through is something like this.

By putting masks onto this quarter and giving them individual voices, Conti transforms them into an instant dancing vaudeville troupe. Audience participation is a devil to get right but, a few hesitant and awkward moments aside, this part of the show takes In Your Face more than a few notches above the usual ventriloquist fare.

I take my hat off to Conti’s courage – involving a single punter in your act is one thing but being outnumbered four-to-one on stage is a recipe for disaster, a disaster she averts with much in the way of skill and humour. She deserves, though, more than a mere critic’s praise. As venues like Hoxton Hall and Wilton’s Music Hall rise from the ashes to much media acclaim, the modern descendants of those who once trod their boards, hilarious vaudevillians like Mat Ricardo, Abi Collins, Rod Laver, Reuben Kaye and Conti herself, are largely ignored by the press. Provocative acts like Frank Sanazi rarely appear in the mass media but, when uttered by more mainstream-friendly comics, their material suddenly merits national attention. The London Cabaret Awards are not returning for the foreseeable and, if urban tunesmiths can have awards celebrating Music Of Black Origin, what about handing out prizes to the best Comedians Of Music hall Origins?

Nina Conti’s In Your Face continues at the Criterion Theatre until 12 March. Information on tickets and show timings can be found on the Criterion’s website.