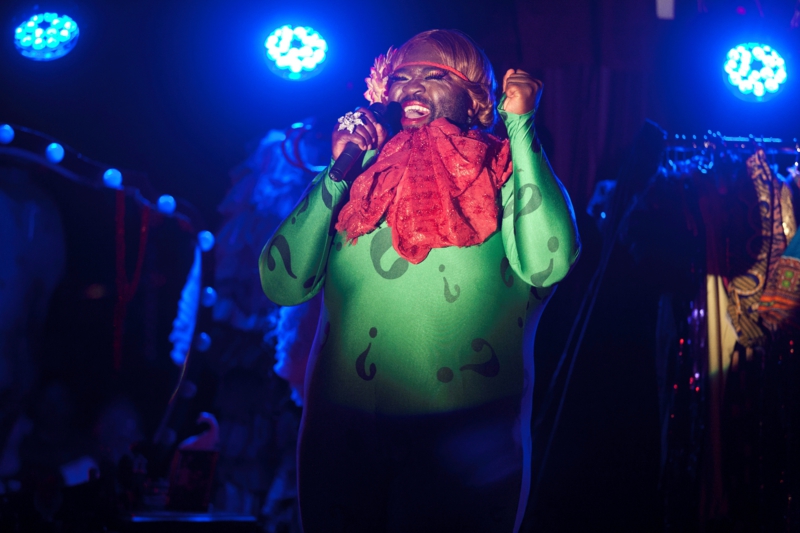 Is it possible to have too much chocolate cake? Naysayers will glad to hear that Le Gateau Chocolat’s first full-length show is a rich, comforting experience.

A regular of globetrotting variety show La Soiree and London’s supperclubs, Chocolat’s new outing explores his multi-faceted character in depth. To label him as drag alone is too simplistic. Despite the sequins, wigs and glittery eyelashes, this Nigerian-born law graduate turned operatic Lycra-fancier offers up a more subtle and even-handed version of gender-bending than may be expected from his standard fare of Puccini and Bon Jovi.

Indeed, here’s a drag queen with a beard (“I know, it makes me look Muslim.”). Eschewing concessions to facial hirsuteness in order to conform to traditional standards of female impersonation, one could have been forgiven for assuming the angle was to be a pure parody of the genre and all for laughs. Not so.

From the first whispered words of the opening Streisand number through a poetic rendition of Radiohead’s Creep, to the party-popping opera finale, a flawless baritone paints the air with a special form of almost joyful melancholia – an audible manifestation of the depression referred to during several introspective moments.

It’s safe to say, over the course of the show, he looks each and every member of his audience in the eye at least once. And we loved him for it. If anyone is feeling even marginally disappointed at the absence of bawdy double entendre or outright indelicacy, the power of personal connection did much to assuage our slight.

There are laughs aplenty, chiefly derived from verbal jabs, colourful banter which reclaims “asshole” as a term of endearment and regular audience interaction. While some cabaret performers steer clear of directly engaging the punters, Chocolat sits amongst the audience on a number of occasions —  for example for his take on Nick Cave’s The Ship Song. At one point, he perches his plus-size posterior on the lap of an audience member who is lustily encouraged to: “Hold me! Hold me!” Later, Chocolat gives some audience members the opportunity to climb into bodysuits (resulting in a prominent camel toe for one unfortunate protagonist) and offer themselves to the crowd for a rubbing.

Although accompanied by four musicians amusingly labelled the Cocoa Quartet, the voice is king: perfectly balanced in its rich, haunting resonance though occasionally indistinguishable from the sound carved by the cello bow. Le Gateau Chocolat encapsulates and transposes himself entirely into each note – his drag, race and size become a moot point. For all the lightness of touch, or perhaps because of it, Le Gateau Chocolat is bereft of a fully realised concept, with no leading theme or distinct cause. Epithets like “there is nothing to fear but fear itself” and “dance as though no-one is looking, make love as though someone is filming” had the whiff of a chain email about them.

This feature length show is a new direction and a move on from singular, song-only appearances. You want it to work, purely because he’s entirely without pretence and immediately empathy-inducing. That said, it doesn’t quite come together in the triumphant flourish that a stronger concept may provide.

Perhaps, rather than gorging on the whole cake, Le Gateau Chocolat is better by the slice.