The New Wave of Live Music in Burlesque 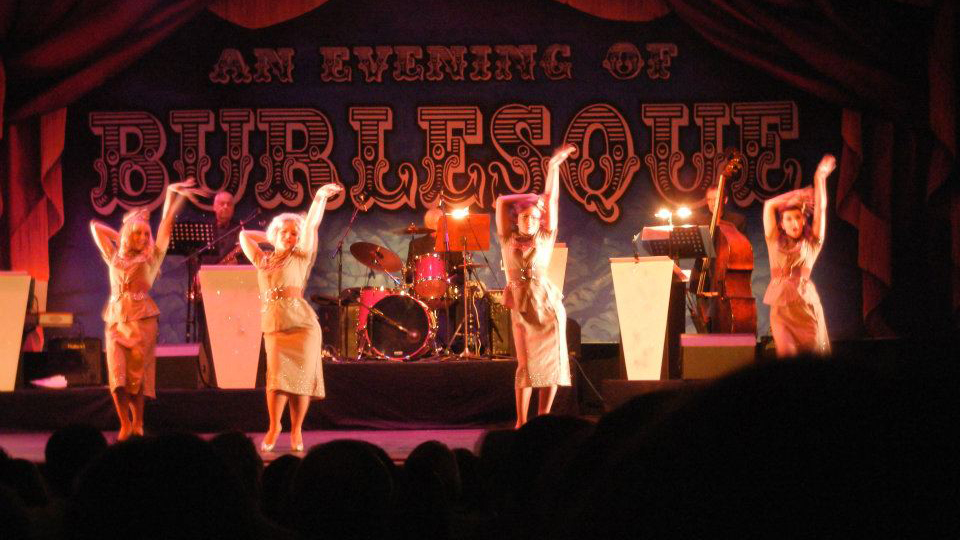 Live music in burlesque is on the rise, but still an exception. C.J. Lazaretti talks to some of the artists behind the latest live-backed revues and probes the effects of recorded backing tracks beyond the obvious budget issues.

The next time someone tells you CDs are dead, take them to a burlesque show. The silver discs live on, backing bump-and-grinders around the world in all their track-skipping glory. Burnt plastic remains an essential variety standard, in lieu not only of USB-equipped laptops that venues are too cheap to buy, but of an element that used to be as mandatory as the half-naked ladies on the bill: flesh-and-blood musicians.

From the grimy music halls and vaudeville joints of the late 19th century to the sold-out big-theatre tours by Tempest Storm and Gypsy Rose Lee, live musical accompaniment was a constant not too long ago. At times, it was even more essential than the dancers themselves – when the Lord Chamberlain banned nude dancing in 1930s Britain, the Windmill Theatre’s orchestra kept playing during the tableaux vivant numbers that ensued. Nowadays, even cabaret singers who take great pride in the allegedly live aspect of their trade would be largely unemployable without their five-inch karaoke tokens. Are backing musicians more obsolete than the compact disc?

Of course not. They’ve only suffered the same change as painting, theatre and hand-cooked food after the advent of photography, home video and microwave ovens: a price increase. Variety in its current state is a small-scale business, and when a show sells anything from 50 to 150 tickets at prices as low as £8, hired musicians become a luxury.

However, that change is not irreversible. Though still a minority, a rising number of UK shows are re-introducing the added thrill of live music into variety, and often for lower ticket prices than what you pay to attend the most established London revues. 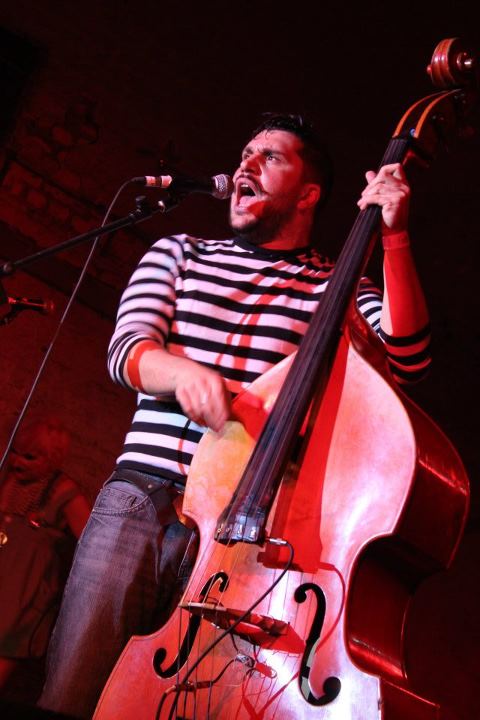 A former double-bassist for seminal all-live variety collective The Flash Monkey, Tom Mansi has gone on to collaborate with burlesque performers in rock bands like Tom Mansi and the Ice Breakers and Uberkaboom. As musical director for Boom Boom Club: Prospero’s Tavern, he has not only arranged and performed pop standards for live accompaniment, but also composed original music. Does the extra-work pay off?

“The ‘limitations’ of a live band also help focus the acts, create a theme and tie the evening together,” says Mansi. “Done properly, the audience gets to experience and remember something special.”

A mix of drama and variety, Prospero’s Tavern gains an invaluable boost from its many live music segments. As a borderline experiment, though, it is hardly representative of the genre, where multi-act showcases with no connection other than the compère’s introductions are the norm.

Blues and Burlesque, by contrast, is predominantly a burlesque revue. Most of its numbers are dance and striptease routines by Bouncy Hunter and Vicious Delicious, who make up its creative core together with pianist Pete Saunders. A producer, arranger and performer in the show, he faces the taxing workload with humour: “there is an obvious challenge, but luckily I have a large piece of furniture in front of me, so most onstage erections can be disguised.” Behind that flippant attitude is a series of creative and practical decisions affecting a live music show from conception to completion.

A driving concern for the event is to put on a unified presentation with a single tone and mood. The group’s pairing of piano-bar banter and jazz and blues tunes is at the heart of their characteristic brand of comedy and sensuality. With backing tracks out of the equation, the evening’s entertainment depends not only on rapport with the public, but between dancers and musicians as well. 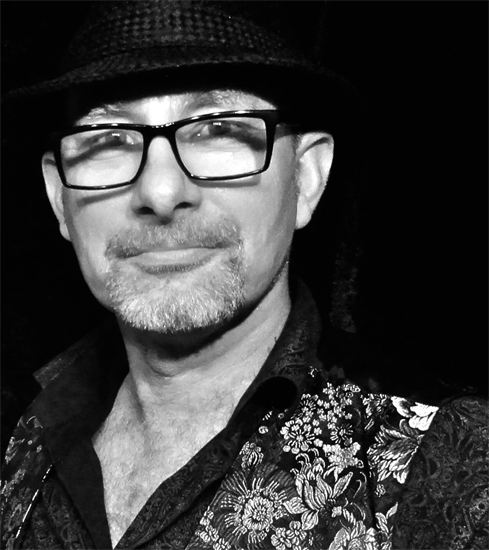 Pete Saunders, musical director of Blues and Burlesque, Between the Sheets and other cabaret shows

Improvisation is both an unavoidable necessity and a cherished reward in live music burlesque, to all involved. Dancer Kitty Bang Bang has experienced the two sides creatively. She has designed choreographies for shows like Between the Sheets (another project featuring musical direction by Pete Saunders), but also improvised in numerous live music revues like Dirty Little Secret and The Great Brain Robbery, as well as in rock concerts by the likes of Motörhead. She appreciates the enveloping atmosphere and immediacy of a backing band, but is aware of the demands it places on a burlesquer.

“If you’re the type of performer that choreographs minutely, these things are a challenge,” says Kitty. “Live music requires flexibility and being able to think on your feet.”

That requirement is a two-way street. The collaboration between backing bands and dancers is akin to that between musicians themselves. Saunders trusts the progression of a striptease to carry his tunes: “in concerts, you don’t have to keep an eye out for a pair of panties coming off to know when you are getting to the end.” Mansi compares the experience of accompanying dancers to that of a rhythm section “bouncing off” a jazz soloist, and adds vamps to his compositions to accommodate acts that vary in duration on account of audience reaction.

Recording-backed solo acts can be rehearsed at one’s leisure. With musicians, a few minutes before lunchtime in front of a bedroom mirror won’t do. Even when venues are readily available for daytime rehearsals, group appointments must be made. And kept. Kitty Bang Bang claims to particularly dislike getting up in the morning to do it.

Burlesquer Kiki Kaboom has a consistent background in nearly every variation of the genre: sexy striptease, comic skits, fan dances, singing and hosting, in full-length devised shows and brief guest spots. Working with competent music professionals allows her to scale rehearsals as needed – one or two numbers demand no more than an hour during soundcheck, but more sophisticated sets call for meetings at previous dates. Once again, the strain is shared by all involved, though often taken for granted by producers and venues.

“It’s all unpaid. I must be stupid to do this, but I can’t stand random selections of acts traipsing one after another onto a stage to backing tracks,” says Saunders. “It’s shoddy cheap entertainment, and ultimately self-destructive.”

The Choice for Backing Tracks

A backing-track-free burlesque scene is unlikely for reasons beyond budget constraints. Recorded music can be put to great effect, just like video projections can enhance theatre without killing its spontaneity. 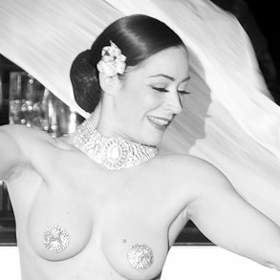 Parodies, for instance, are often funnier when accompanied by their actual target, like Ooh La Lou’s take on Barbie Girl. A narrative skit like Peggy Pom Pom’s airplane-signalling World War II satire depends on sound effects including engines, explosions and voice instructions from an air traffic controller. Now compare those to your run-of-the-mill fan dance set to The Stripper, or another lip-synching tribute to Liza Minnelli’s routines in Cabaret: if anything, their pretence of glamour only draws attention to the fact that they don’t have the production values to bring it off.

One of the most famous singing burlesquers in Britain, Kiki Kaboom has sung and danced to live backing in Milan and throughout the UK as part of touring revue An Evening of Burlesque, and with frequent collaborators like musical comic Desmond O’Connor. While she treasures the degree of control allowed by commissioned recordings made to her specifications, she finds human accompaniment far more appealing and tangible. “It’s live and alive, which is the point of cabaret.”

A burlesque starlet with a band can command her music to adapt around her at every performance, in whatever direction she feels like taking it. All others must dance to the tune of their CD-R chaperones. But does it show onstage? 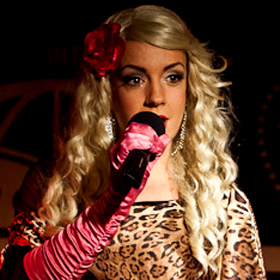 Saunders contends that a big, live act finale always generates more applause than a track fade-out. Kitty Bang Bang, on the other hand, hasn’t found audiences more vocal at her band-backed appearances. Mansi enjoys a vantage point to observe the difference when performing at Prospero’s Tavern: “There’s a lot more energy when the band is playing. I notice the increase, as I’m onstage during backing tracks as well.”

Live music in burlesque is not inherently special. The only thing making it special is the number of boring acts pretending Benny Goodman and a handful of glitter can turn them into a femme fatale. Neither is it inherently a more complex beast to assemble: to think a routine requires less time spent on conception, choreography, costumes, props and rehearsal, simply because it consists of one dancer and one backing track, is a pledge of mediocrity.

I, for one, long to see it become a lot less special.

See also: The Most Overused Backing Tracks in British Burlesque